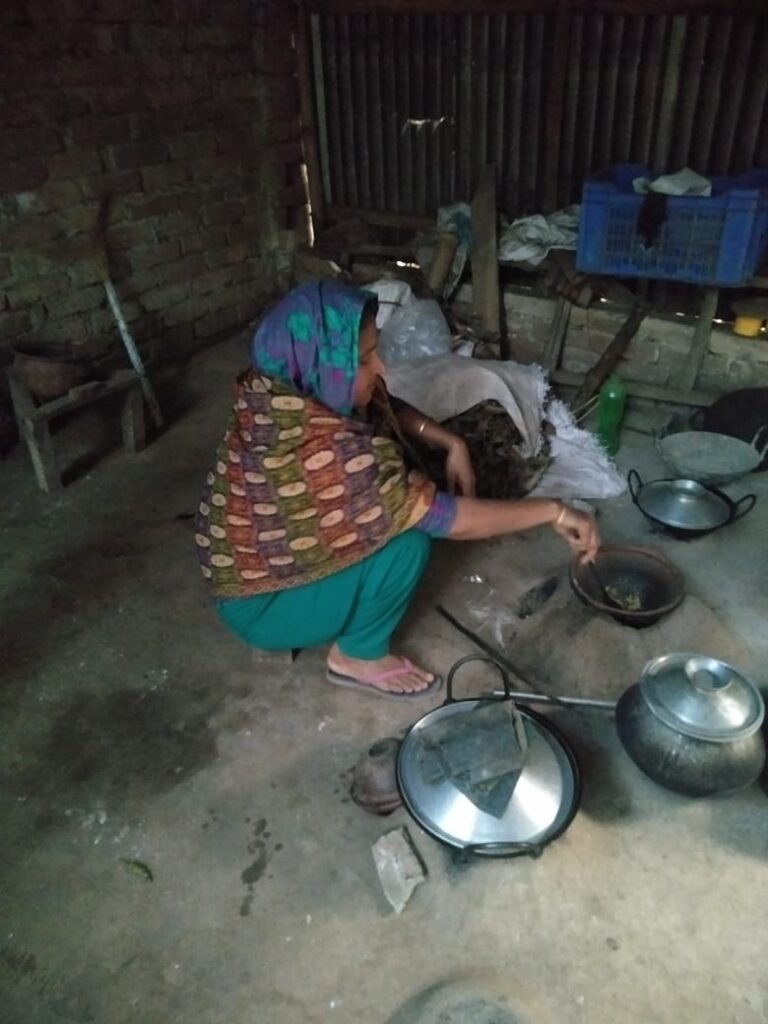 Since the end of September 2021 we have been asking workers about their most costly expense (other than rent) each week. We have also been asking them who made the decision to spend the money and how they spent the money (in cash or digitally). In this blog we marry these data with a segmentation analysis we conducted in October to understand the varying roles of women garment workers within their households. The segmentation analysis focused on women for whom we had sufficient data to feel confident in their assignment to a particular segment based on the pattern of their behavior over time, meaning that this blog draws on a sub-sample of 703 women. 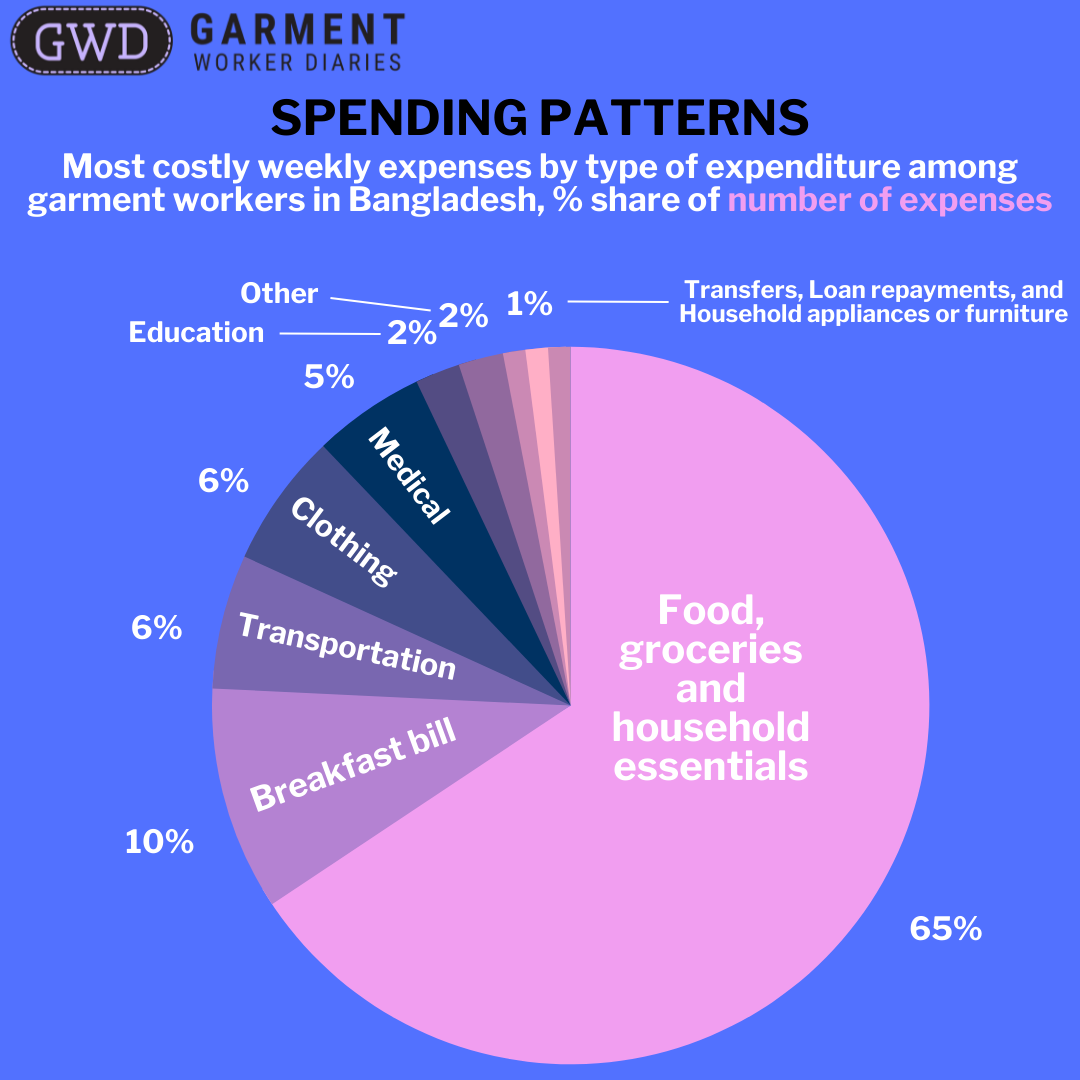 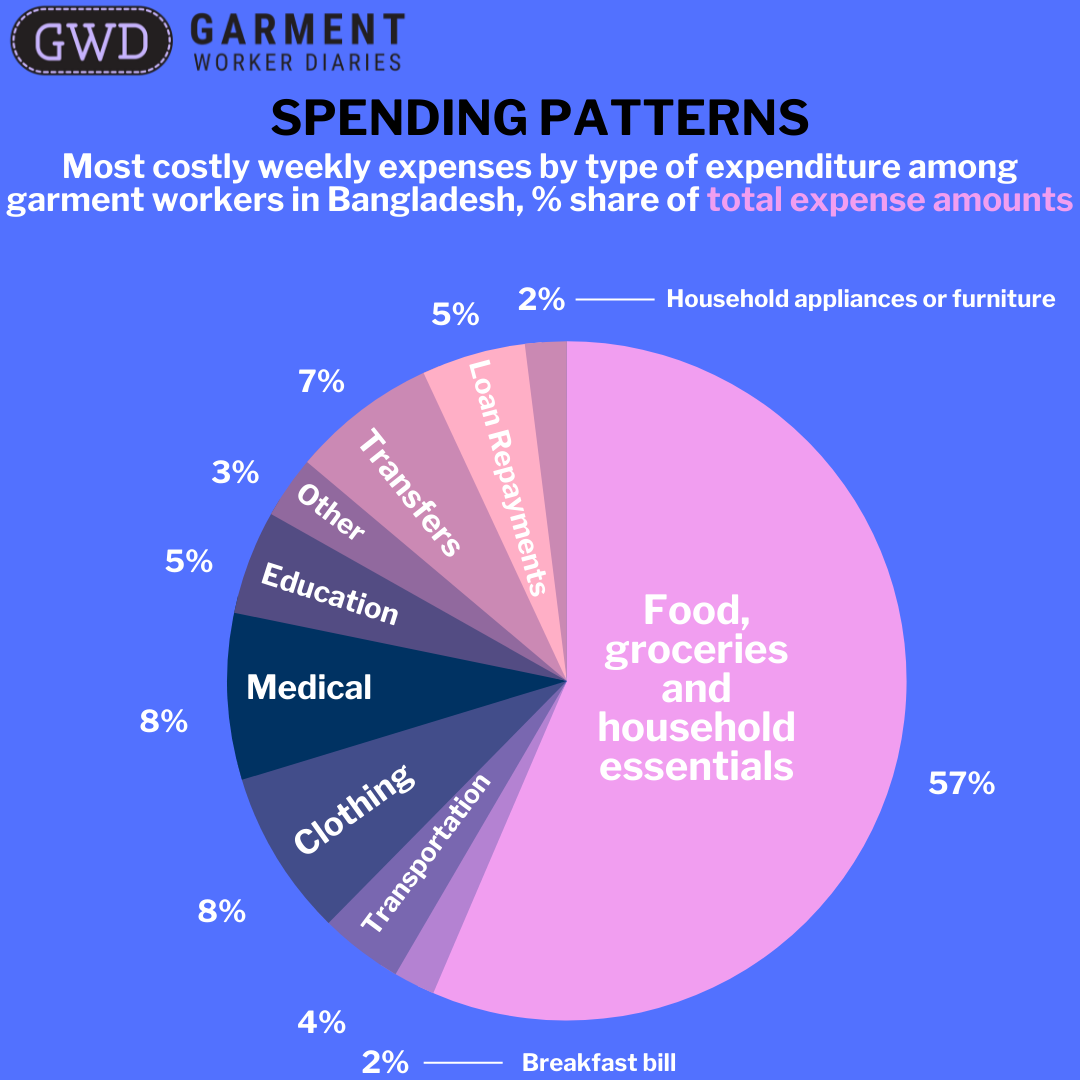 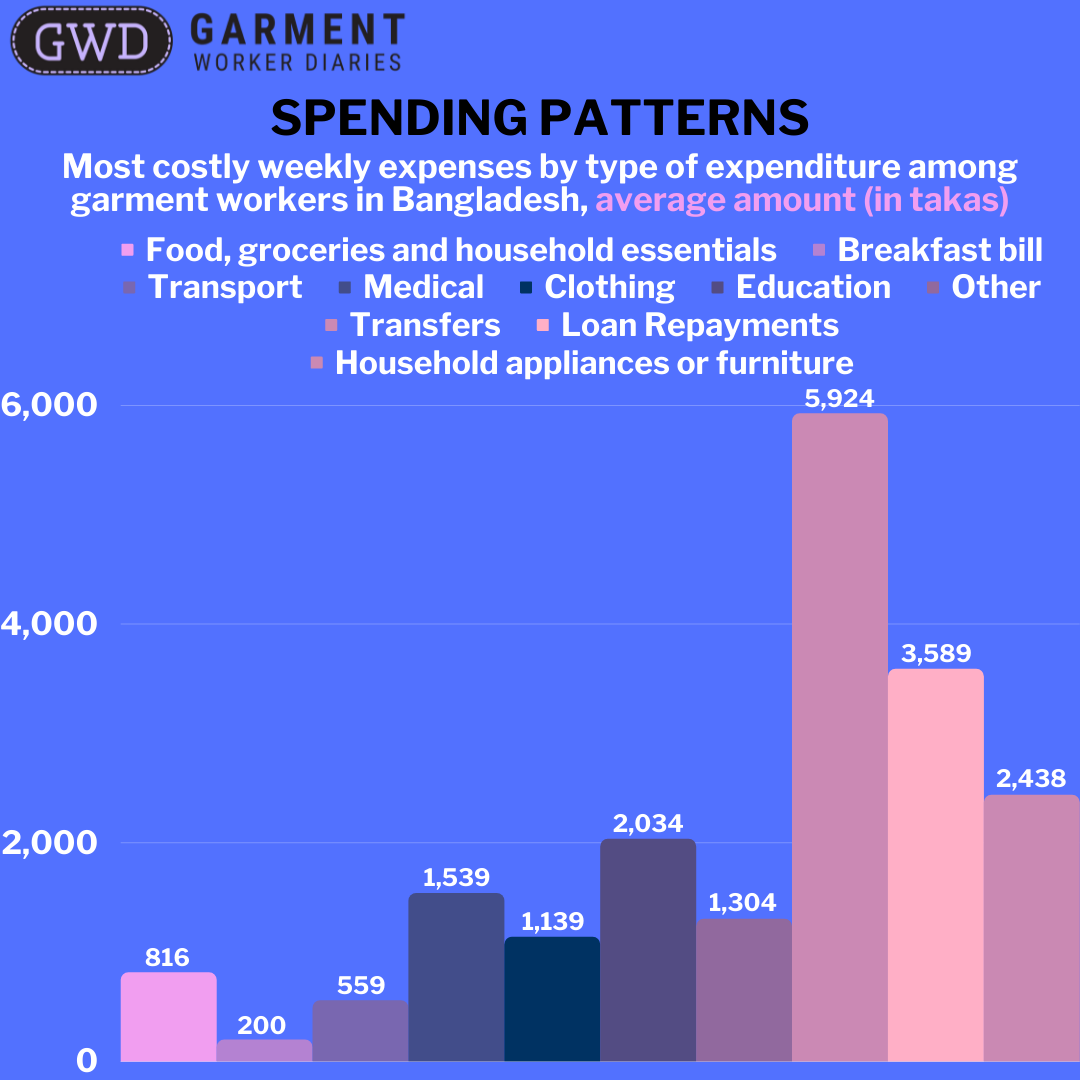 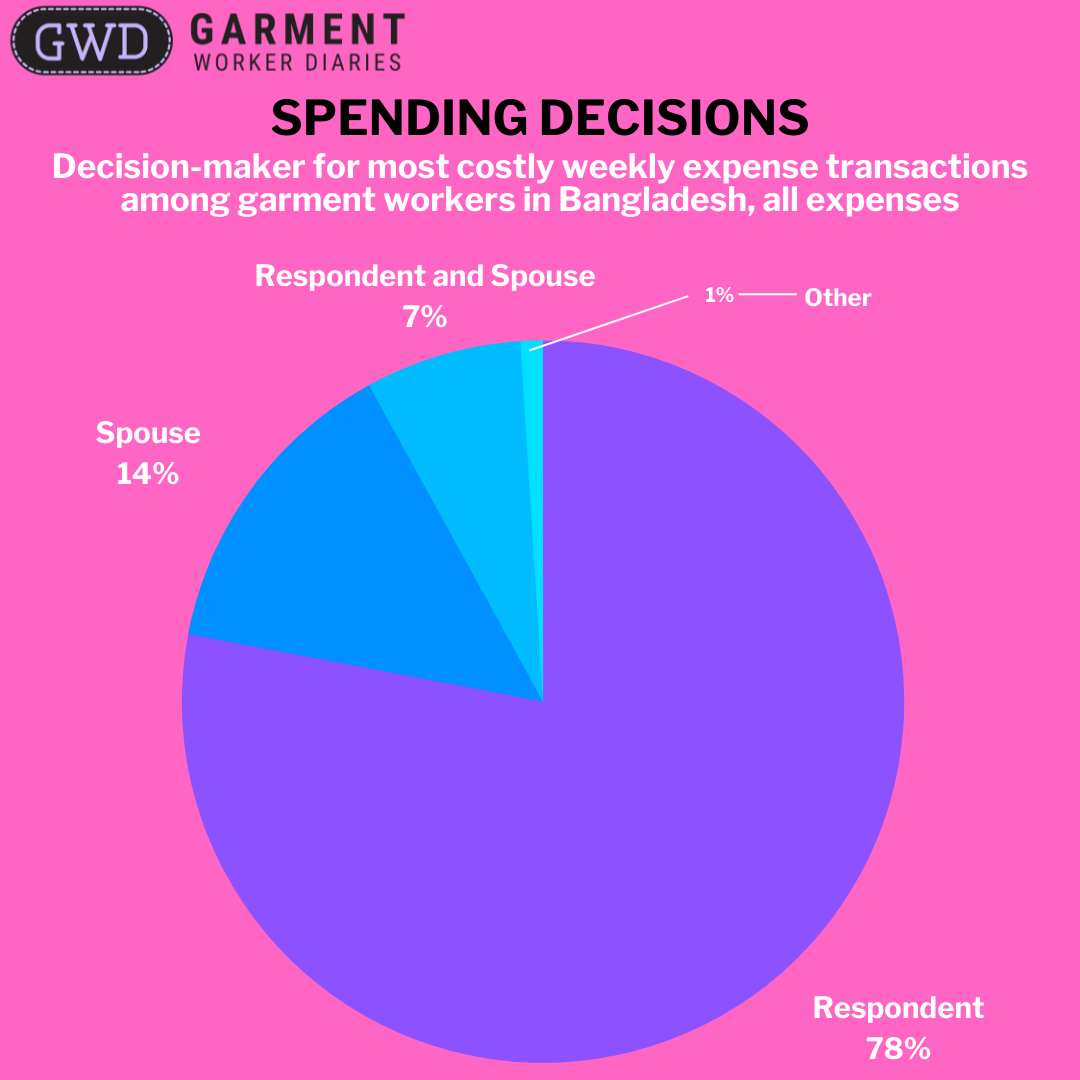 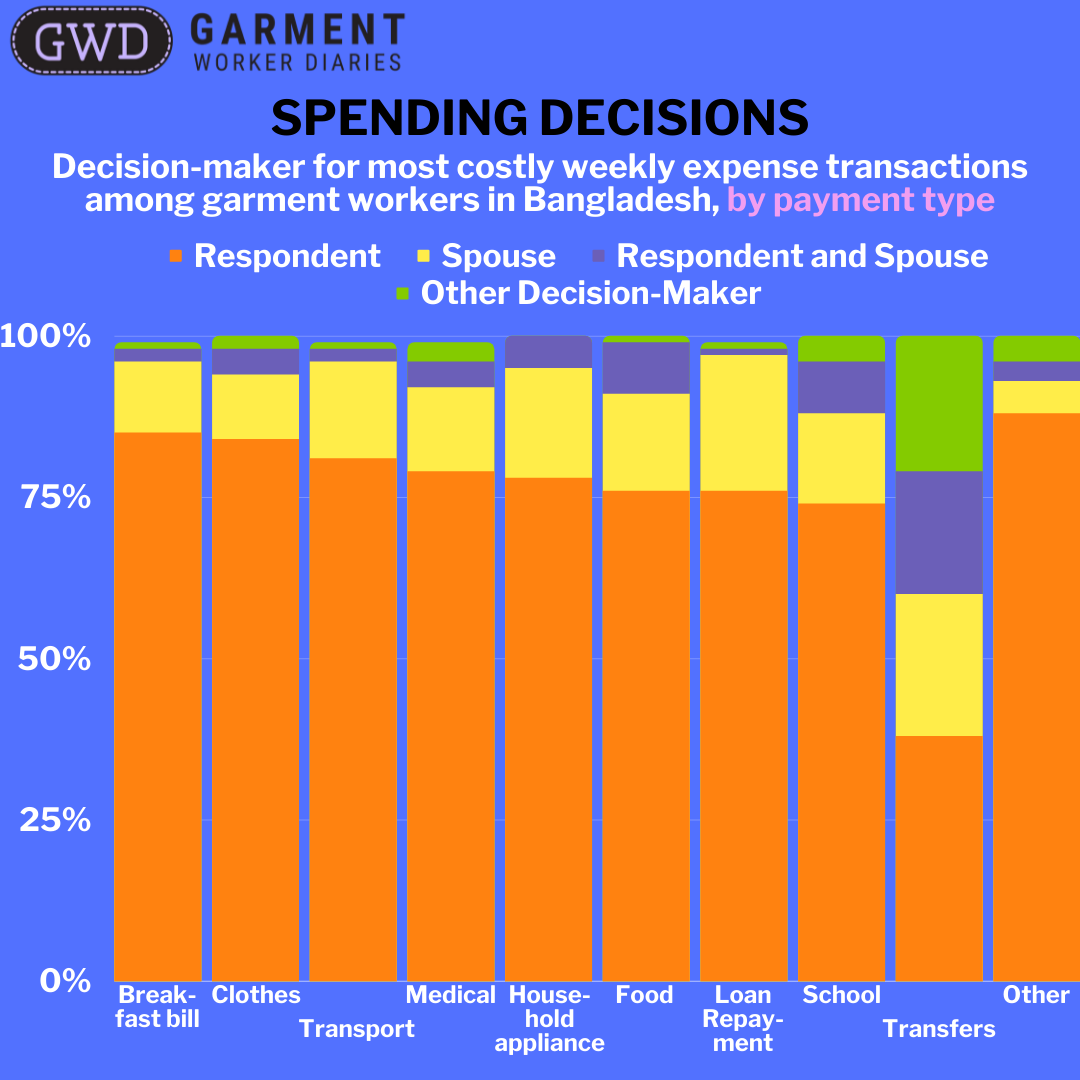 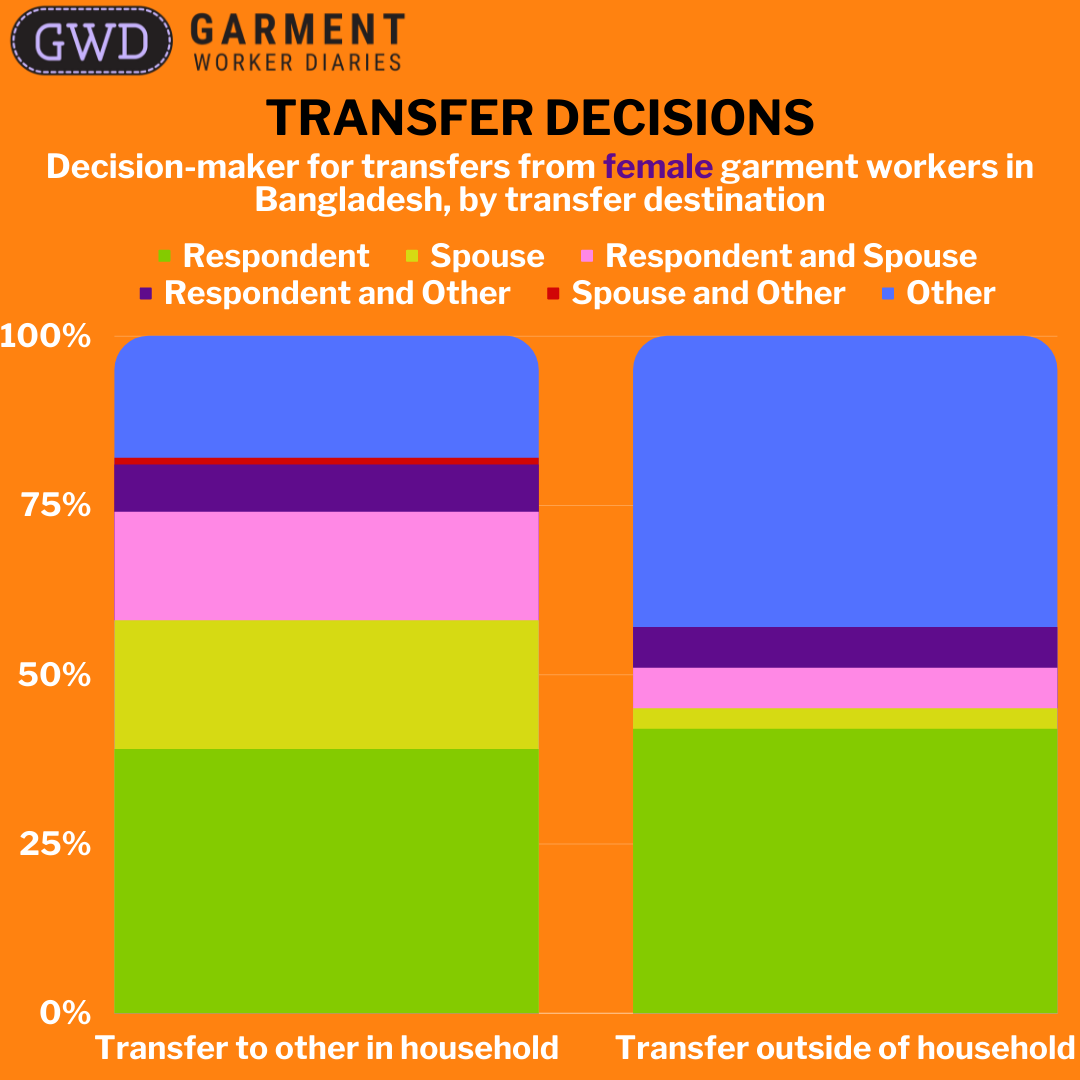 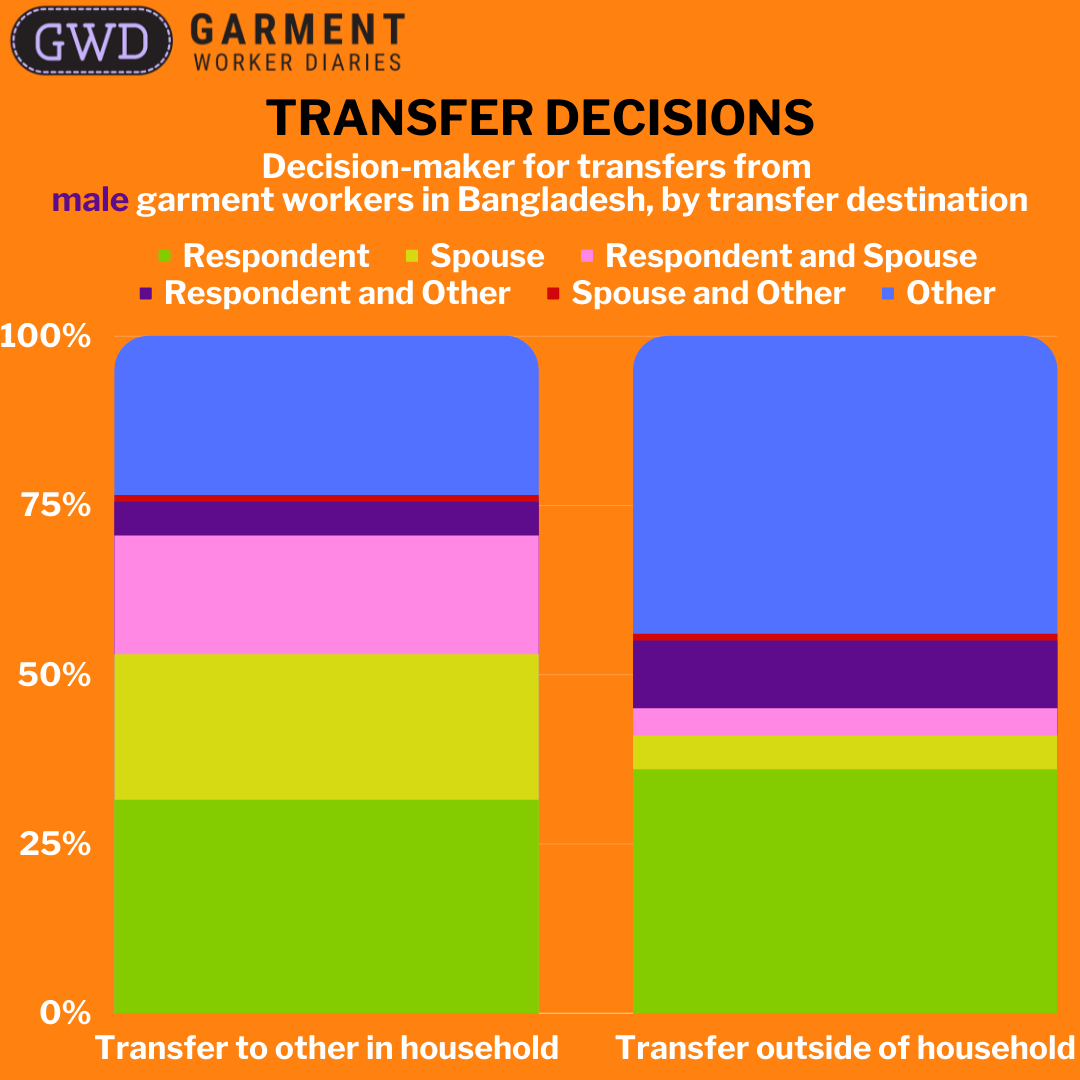 We have over 9,600 responses to the question related to spending from 703 women in our sub-sample for the period from October to December 2021. In one quarter of those responses the women reported that they had no expenditures that week. Of the remaining 75% of responses, the most common response was that some type of food, grocery, or household essentials expenditure was their most costly expense—65% of all responses accounting for 57% of the amount they reported spending on their most costly expenses. The second most common costly expense was payment of what the workers call their “breakfast bill,” which is primarily a payment to street vendors for a prepared breakfast they buy in the mornings before work, but can also include other prepared foods purchased from street vendors. But this item only constituted 2% of the amount they spent on their costly expenses, with the average breakfast bill amounting to only Tk. 200 in a week. The other responses covered a wide variety of different expenditures including transportation, medical expenses including medicines, clothing, education, transfers, loan repayments, and household appliances of furniture. Excluding the breakfast bill, the average amount spent per transaction ranged from Tk. 559 for transportation-related expenditures to Tk. 5,924 for transfers to other people.

This is borne out by the more general information we collect about transfers each week, which is part of our core survey. We ask workers to tell us about the transfers they have made in the past week, both to and from others in their household and to and from others outside their household. We also ask them who made the decision to initiate the transfer. The share of respondents reporting they made the decision to initiate a transfer to someone else either inside or outside the household is very similar to the answers we reported earlier. Where they differ is in the distribution of answers across other people initiating the decision, and this is due to the very different social dynamics within a household compared to those with others outside the household. Within-household transfers were highly likely to involve the worker’s husband, who either initiated the transfer on his own or in consultation with his wife. For transfers outside the household, others, such as parents or siblings, were far more involved in the decision.

To conclude, what the spending pattern data reveal is that the bulk (75%) of female garment workers’ largest expenses in any given week (aside from rent) involve buying food or other household products, and that a majority share (almost 60%) of that total money spent goes to food and household products. When we add in the percentage share of total expense amounts that go to transfers (another 7%), we see that a full two-thirds of female garment workers’ expenditures either leave their hands or are spent on what are almost certainly disposable commodities.

The spending decisions data reveal two more important takeaways, and perhaps a surprise: for almost all types of costly purchases, female garment workers are largely autonomous in deciding what they will buy, and in situations when they don’t have complete autonomy this is partially made up for by the fact that they are deciding along with their spouse; however, this patterns breaks down when we look at transfers, as female garment workers are much less in complete control when deciding to whom they should send money.

The surprise here is that the “pull” factor of transfers is not unique to women, and in fact acts even more strongly on men. In the table below, we can see that in general men give up even more of their autonomy in money transfer decision-making than women. These data suggest that the holistic decision-making phenomenon involved in money transfers is not gender specific, but perhaps instead a value intrinsic to how transfers are utilized and regarded by garment workers in Bangladesh.

Next week we will return to spending patterns and decision-making, but we will look at the data from the perspective of three groups of workers whose transfer activity and rent payment patterns cluster together: Supporters, Independents, and Money Managers.

The data used for the analysis presented here come from interviews conducted over the phone throughout 2020 and 2021 with a sub-sample of 703 women workers, and a sub-sample of 235 male workers. These workers are employed in factories spread across the five main industrial areas of Bangladesh (Chittagong, Dhaka City, Gazipur, Narayanganj, and Savar).