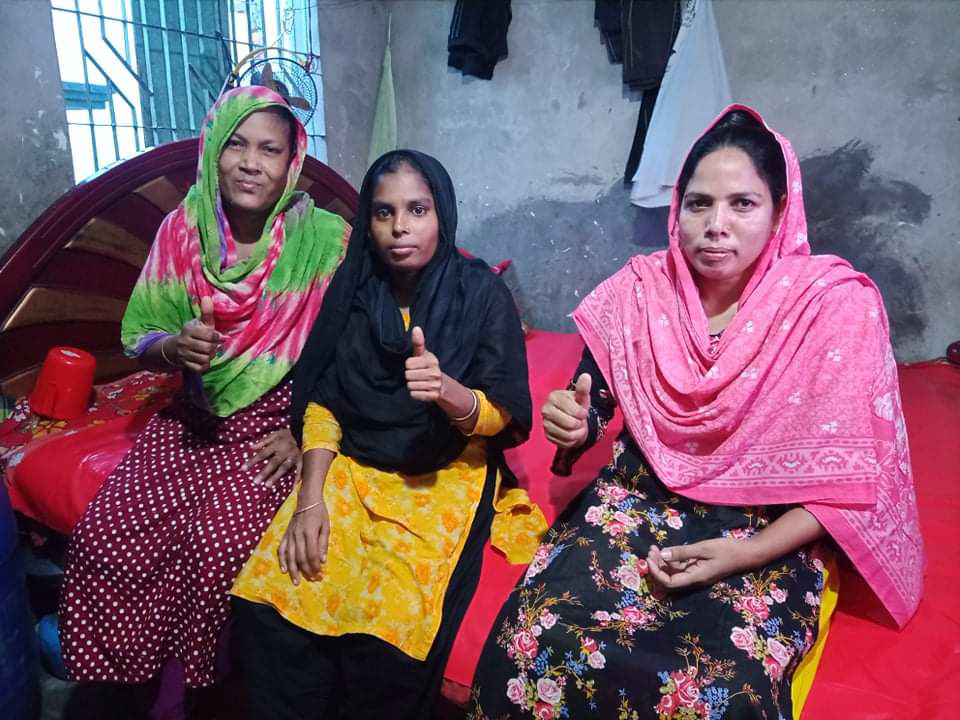 January 2022 was the busiest month for garment workers in Bangladesh since at least before the start of the COVID-19 pandemic in the beginnings of 2020. In part this is because there were a lot of regular working days in January—27 in total, because a 6-day week (Saturday to Thursday with Friday off) is the norm in Bangladesh. But during those 27 days the workers also put in a lot of work hours—the median worker put in just under 10 hours per day every working day, which is the legal maximum (8 regular hours plus 2 overtime hours). This means that about half our sample of workers worked more than the legally allowed number of hours of work in January. We’ve got the specific hourly numbers below, as well as more updates on the study through the end of January 2022.

Before we move on, we have one note about garment workers’ COVID-19 vaccination rates: we will be sharing a blog in the near future which will discuss vaccination shots in more detail, and we intend to share more precise details about current vaccination rates then. So while you won’t be seeing an update here, we’ll be providing more analysis than usual on this important subject very soon. 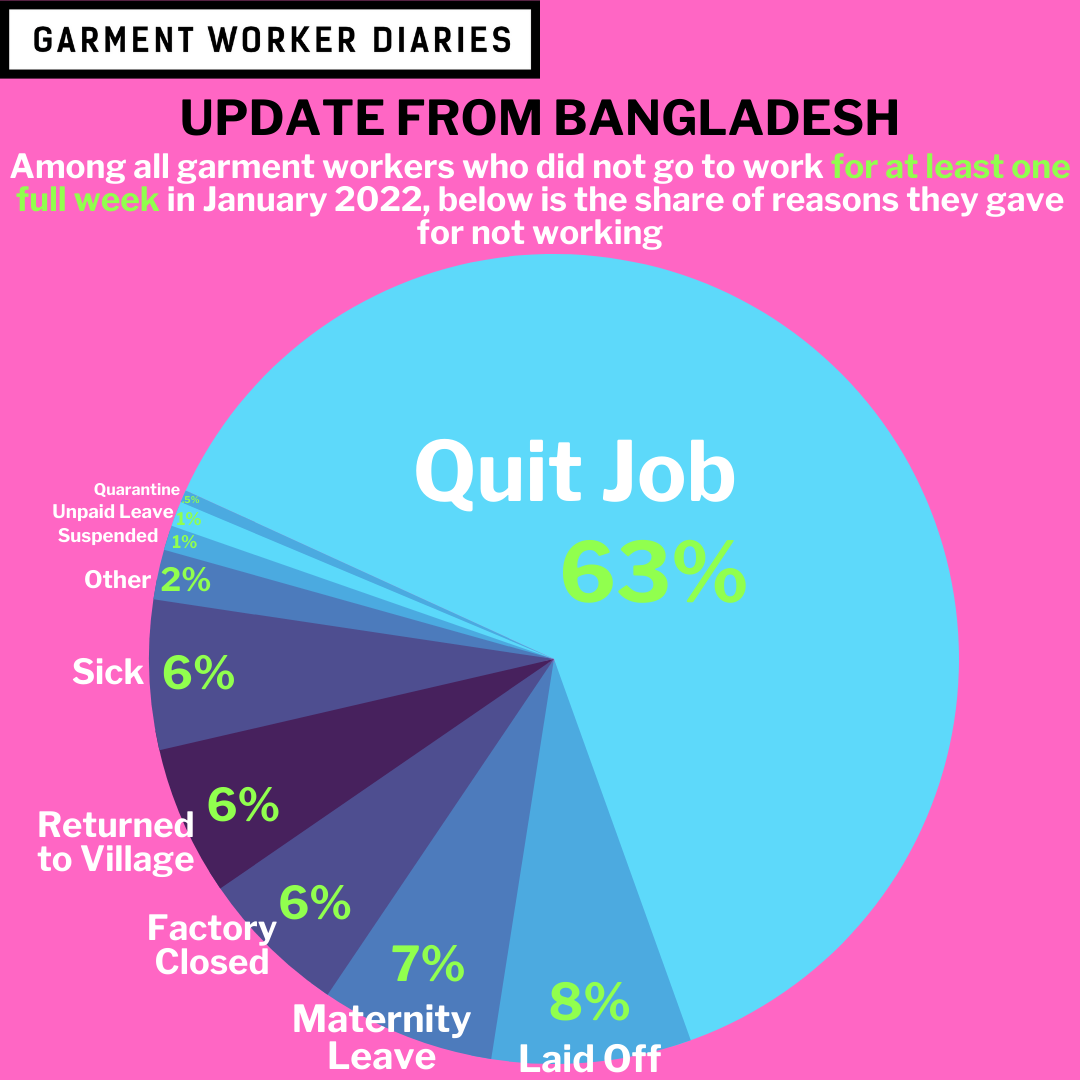 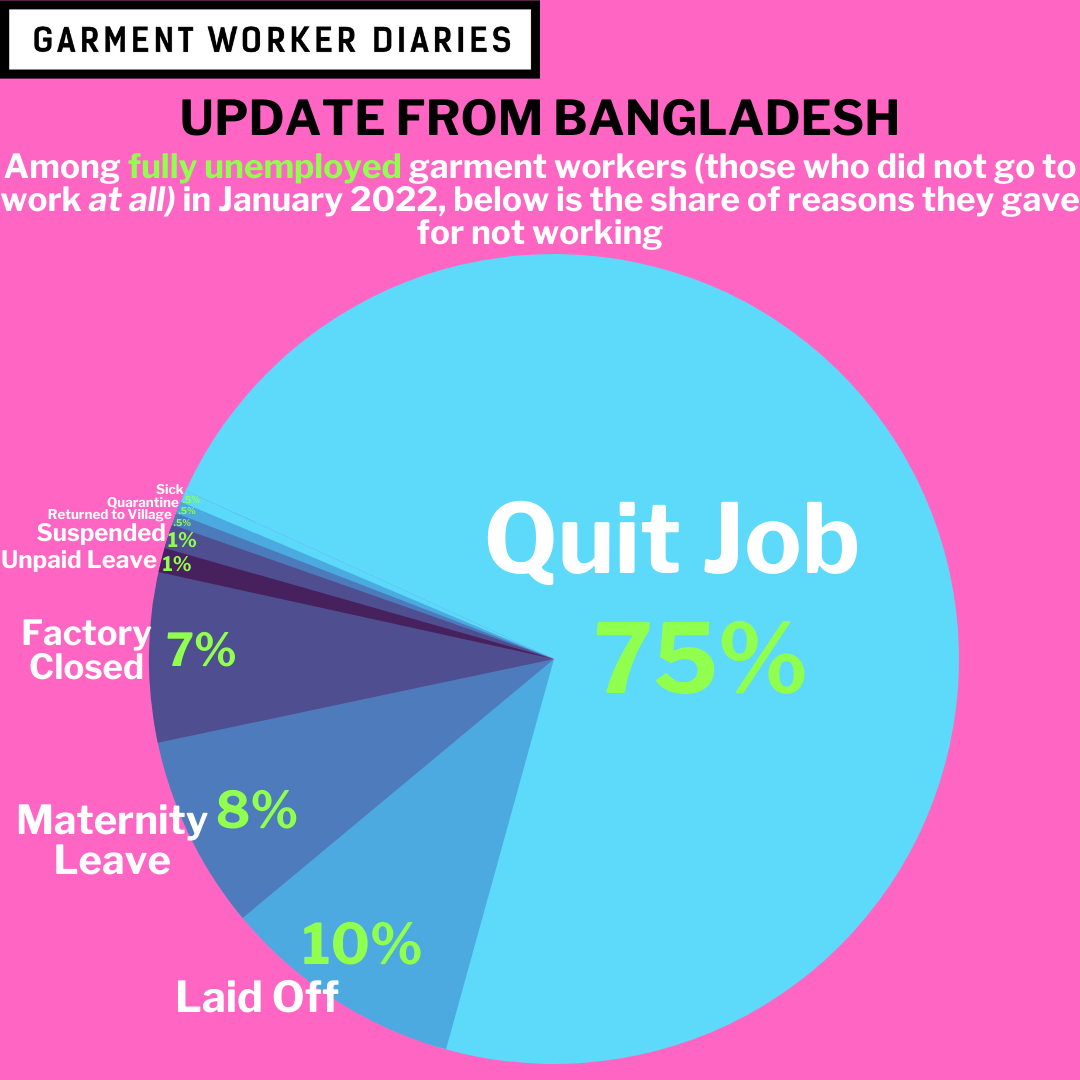 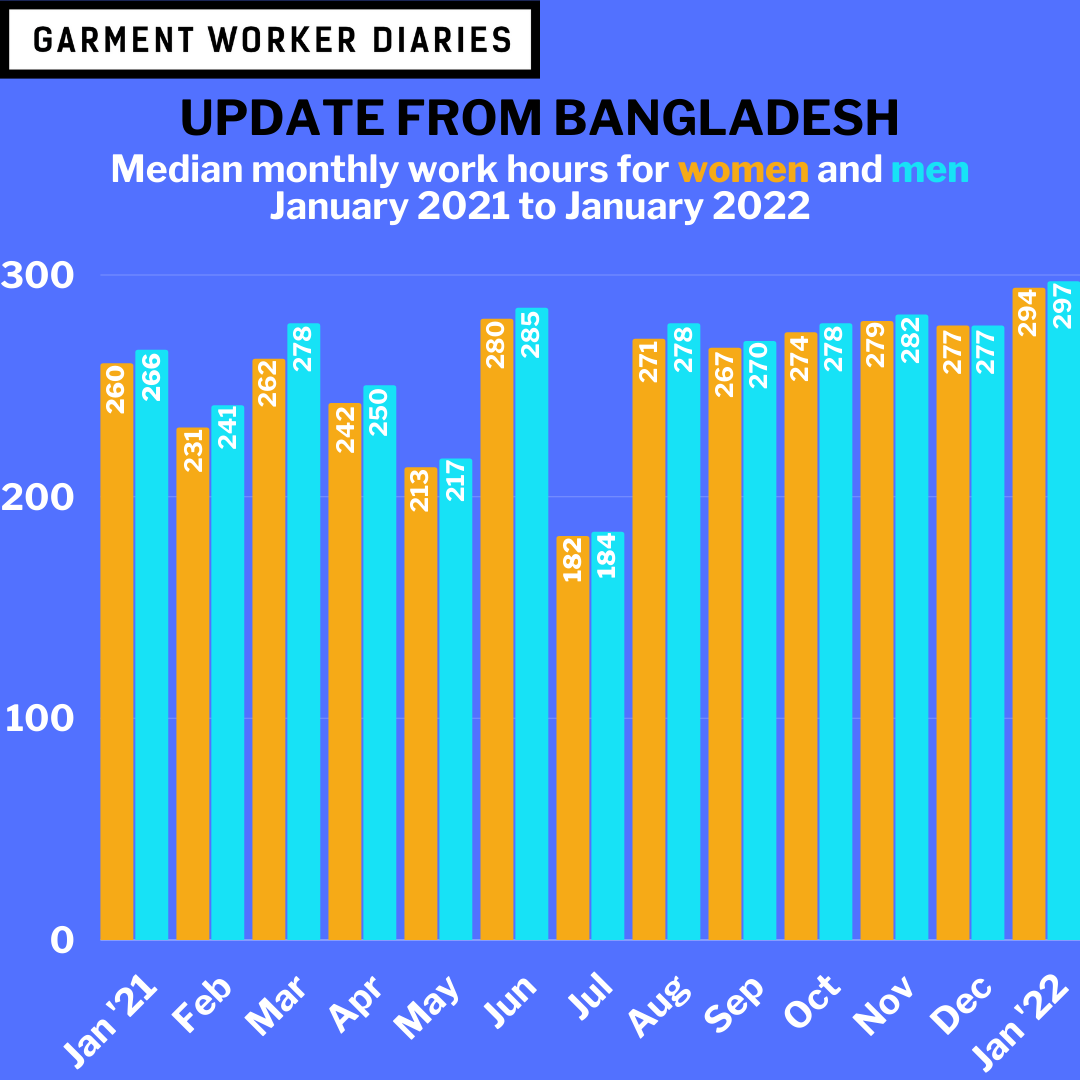 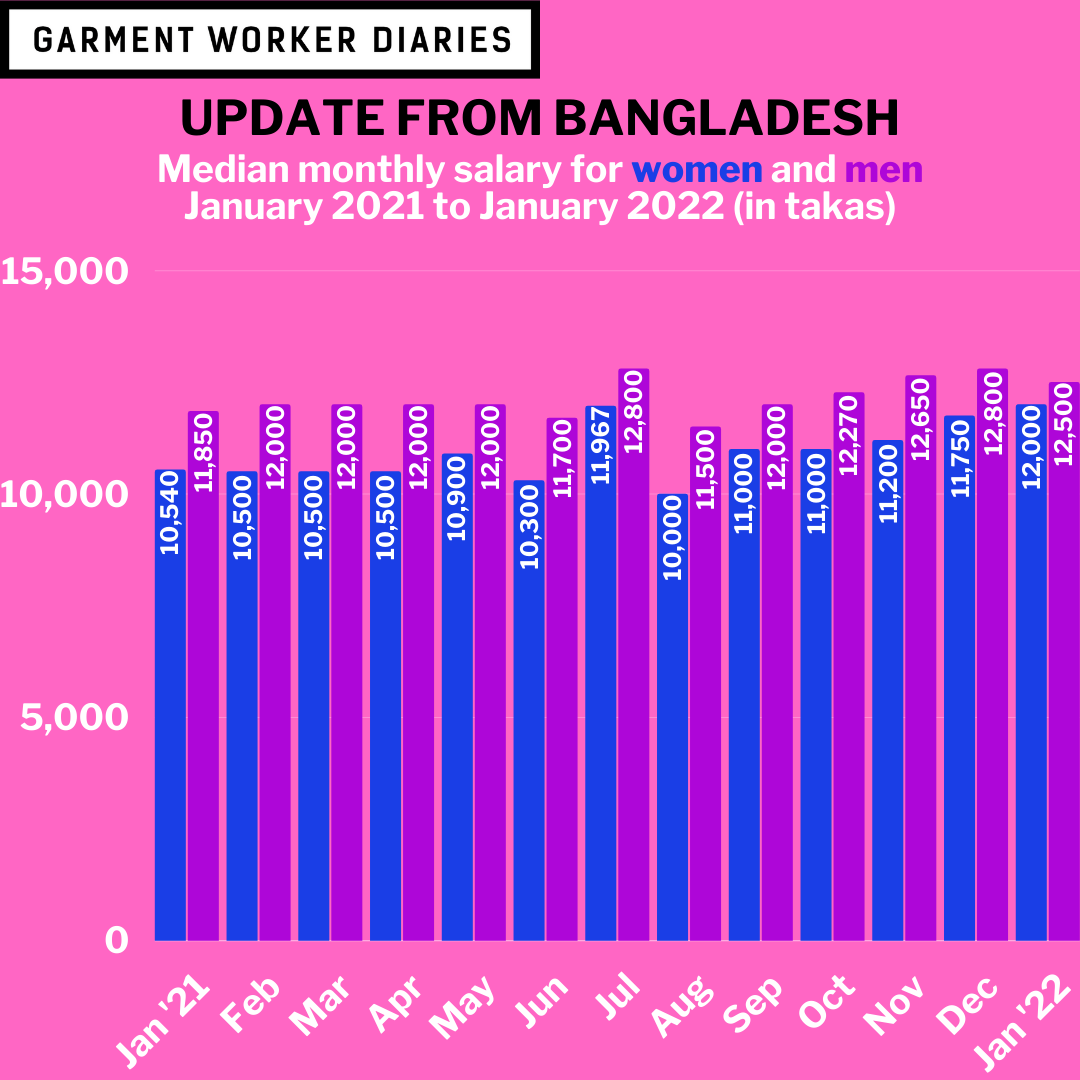 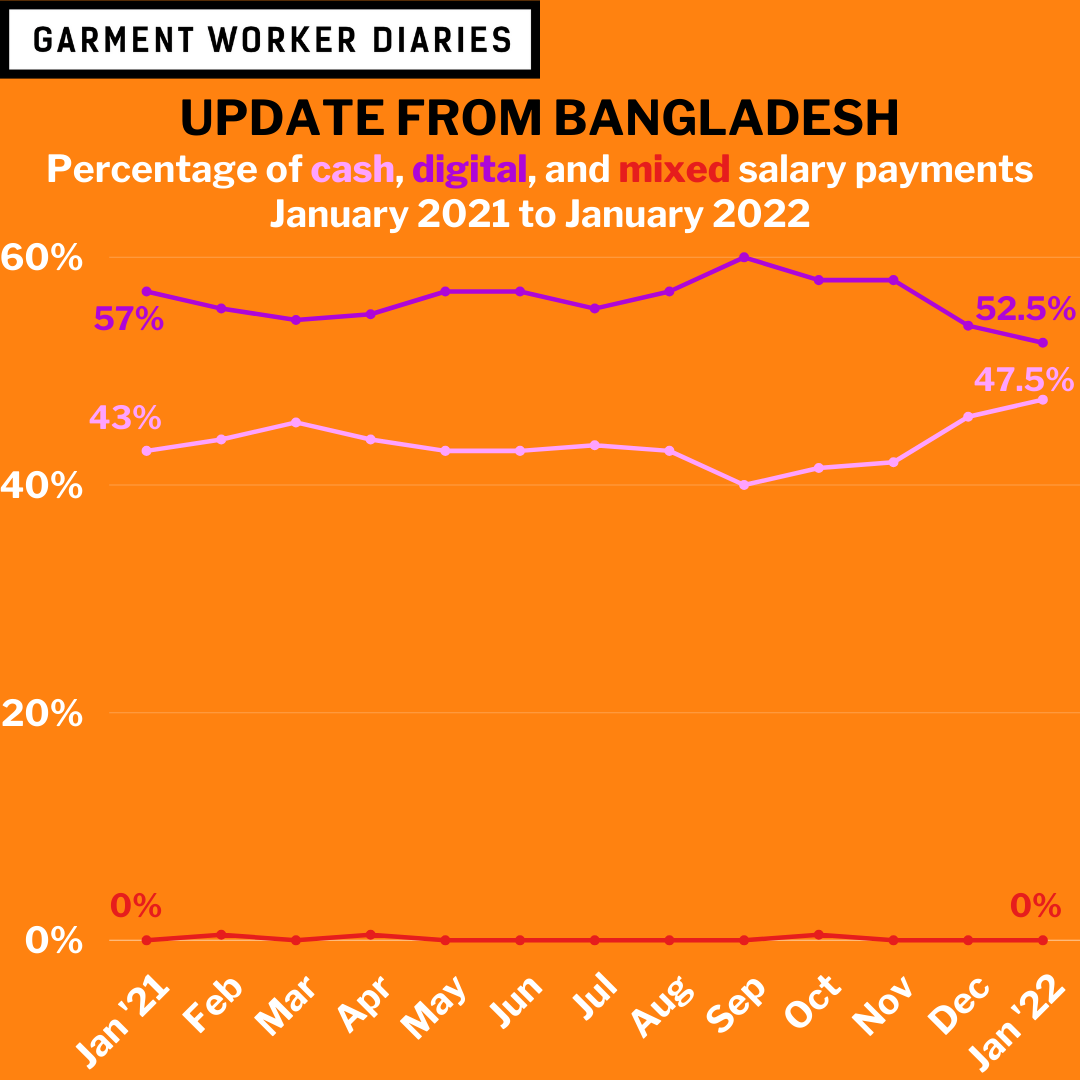 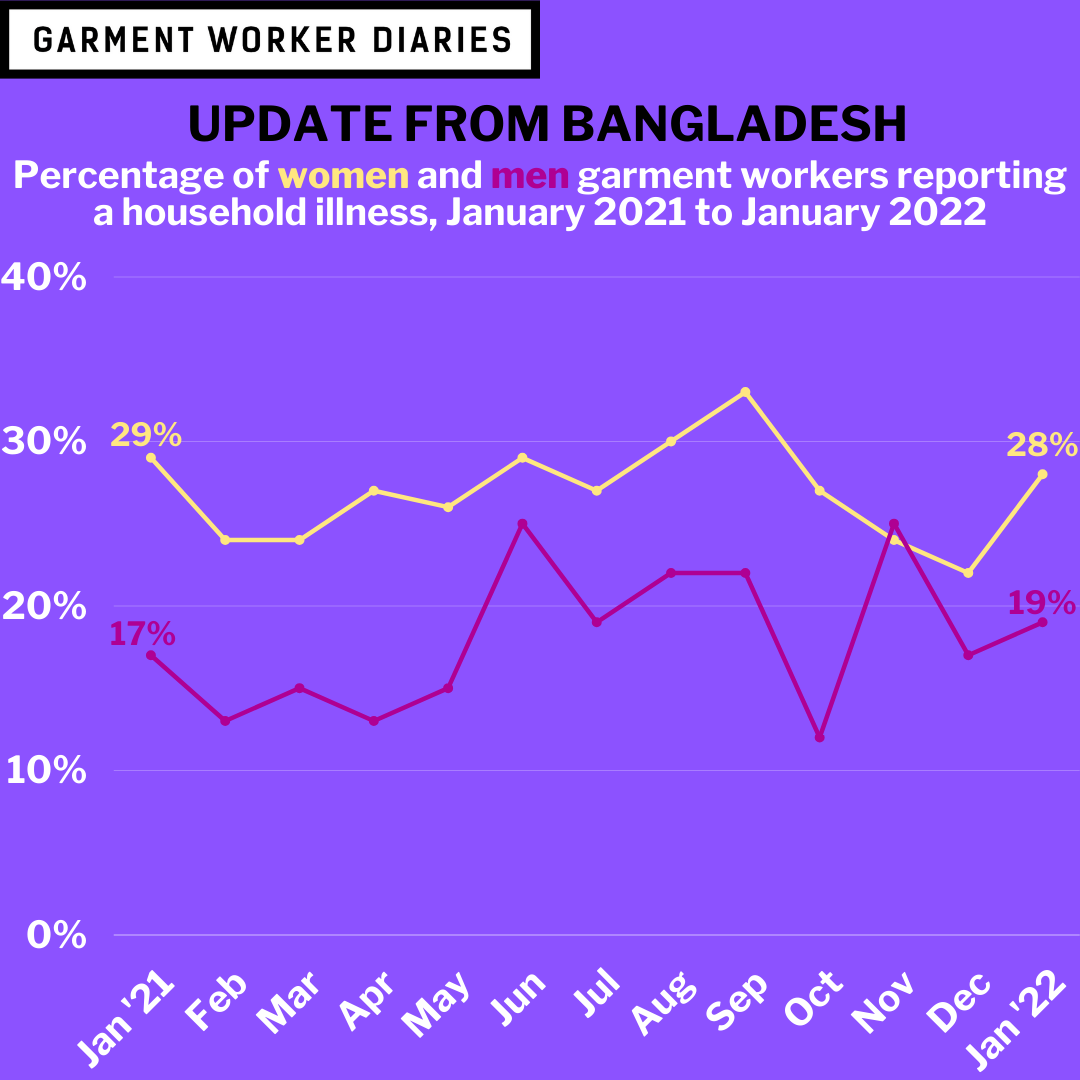 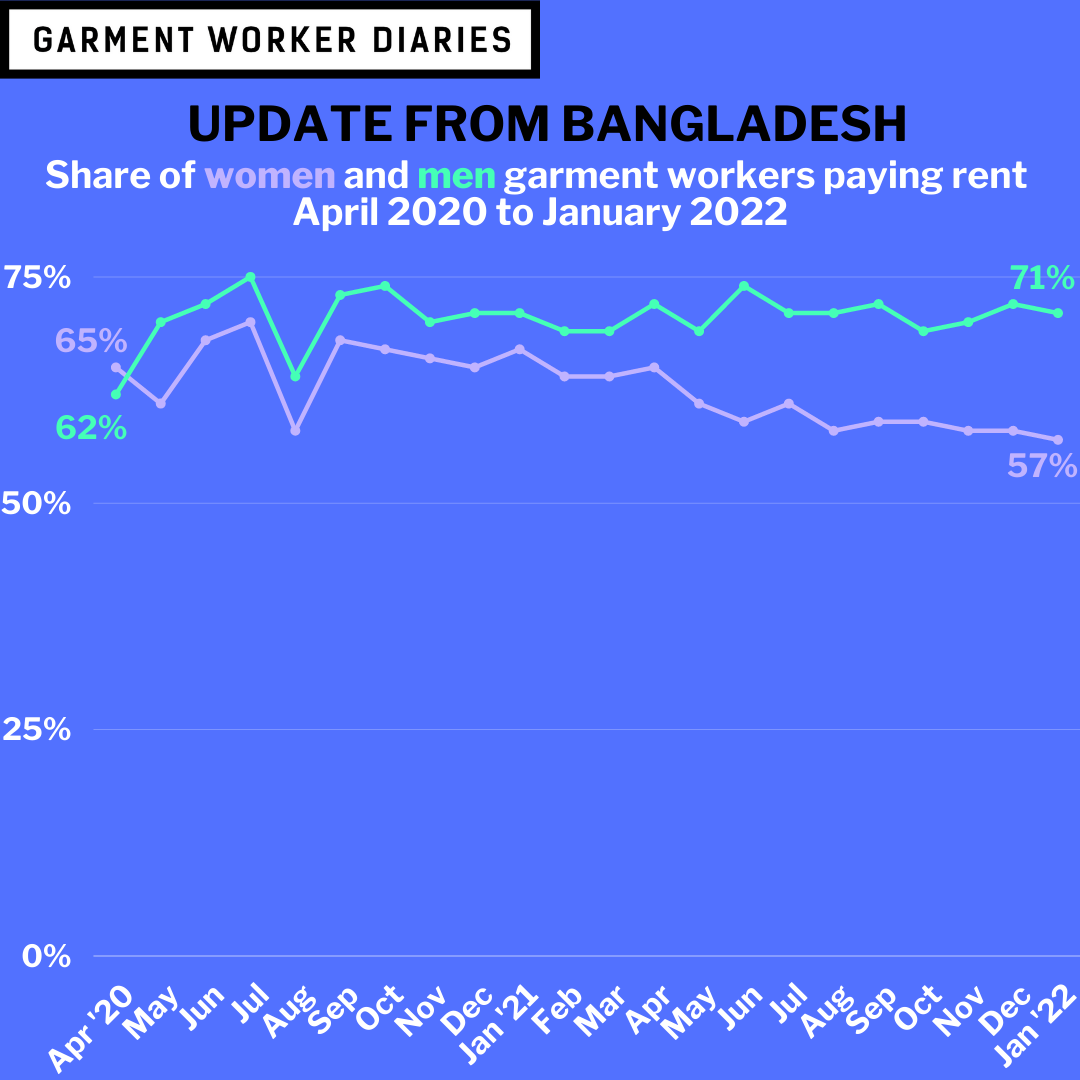 84% of all garment workers went to work at some point in January 2022 (including 82% of women and 90% of men). While that share of respondents who went to work is fairly typical, the median hours worked in January was much higher than usual and the highest in the study thus far: 295 hours (including 294 for women and 297 for men), cruising past the previous high of 282 median hours in June 2021.

Among respondents who did go to work in January but also missed at least one full week of work or more, the shares of reasons given for not working were very similar to previous months, with having quit one’s job listed by 63% of respondents, an uptick of 3% from December and still by far the most common response. As in December one respondent in January told us that they couldn’t go to work because they were home quarantining.

79% of garment workers (including 77% of women and 85% of men) received a salary payment in January 2022. While not completely out of pattern, 79% does represent the lowest share of workers receiving a monthly salary in the study thus far.

Typical monthly earnings in January, Tk. 12,000, were identical to the typical earnings for all workers in December (including Tk. 12,000 and Tk. 12,500 for women and men, respectively, a slight increase for women and a slight decrease for men compared to December).

Regarding the extremely high work hours respondents put into their factories in January, it will be interesting to see what the typical salary amounts are when we’ve finished analyzing the February data (remembering that garment workers in Bangladesh are paid a month in arrears). We will report back to you with this analysis in our next monthly roundup blog.

The shares of salary payments that were digital and cash-based in January edged closer together than during any other month so far since April 2020, to about 52.5% and 47.5%, respectively (three workers told us they received their salary payment via both digital and cash means, representing less than half a percentage of all workers).

Intrahousehold transfer, loan, saving and withdrawal transactions among garment workers were made primarily in cash in January 2022, just as with all other months of the study. Also like other months in the study, money transfers (both coming and going) were transacted primarily via digital means.

With the shares of digital and cash salary payments trending ever more closely together, it will be interesting to see if this in turn further suppresses the share of digital financial transactions garment workers are carrying out. We will be conducting an in-depth analysis of the impact of the decline in digital wage payments on digital financial service use in the coming weeks and will share the report when it is done.

The monthly rent payment gap between women and men remained as wide in January 2022 as in December, as 58% of women and 72% of men reported paying rent in January (61% of garment workers overall).

Food security rates remained almost exactly the same in January 2022 as in December (89% of workers, 88% of heads of households, and 93% of workers’ children reported being food secure in January). Likewise, it will be interesting to see if these food security rates improve even just a little bit when we’ve finished our analysis of the February data, given that we should be expecting to see workers earning more money than they have in the study thus far due to their very high work hours in January.

The data are drawn from interviews with about 1,300 workers interviewed weekly from April 2020 to January 2022. The number of worker responses in a particular month varies depending on interview participation rates throughout the month but were never below 1,206 during this period. These workers are employed in factories spread across the five main industrial areas of Bangladesh (Chittagong, Dhaka City, Gazipur, Narayanganj, and Savar). Just over three-quarters of the working respondents are women, roughly representative of workers in the sector as a whole.

Link to Other Monthly Updates