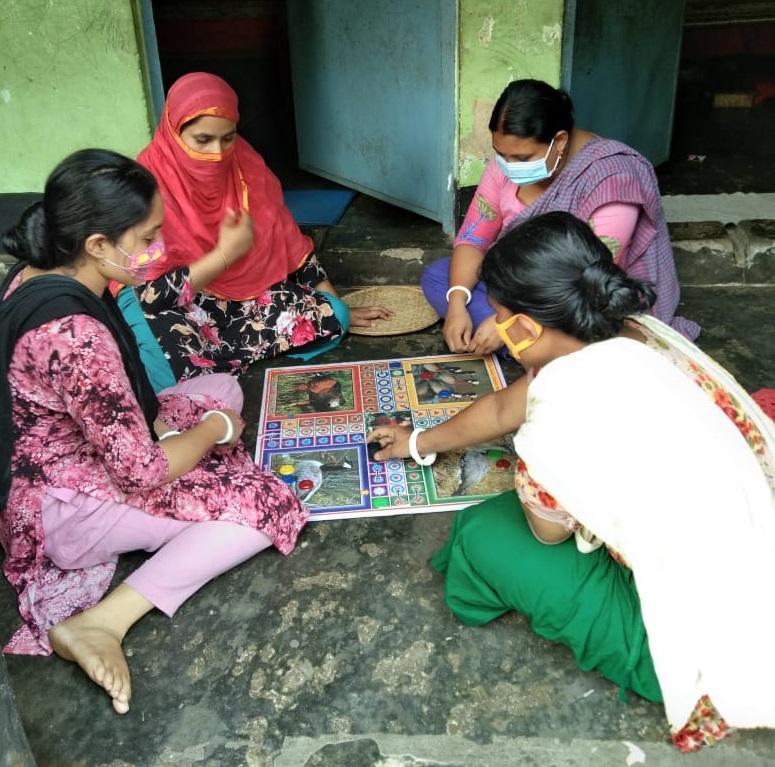 In our last monthly update blog, we made some predictions about what the record-high number of hours the typical garment worker in Bangladesh worked in January 2022 might result in when their paychecks arrived in February 2022. It turns out some of those predictions came true, which we’ll note below.

Also, we apologize that we do not yet have a monthly update for you on COVID-19 vaccination rates among garment workers. We are still analyzing the data and want to ensure we are portraying a completely comprehensive picture, which we hope to share with you in our next blog post. 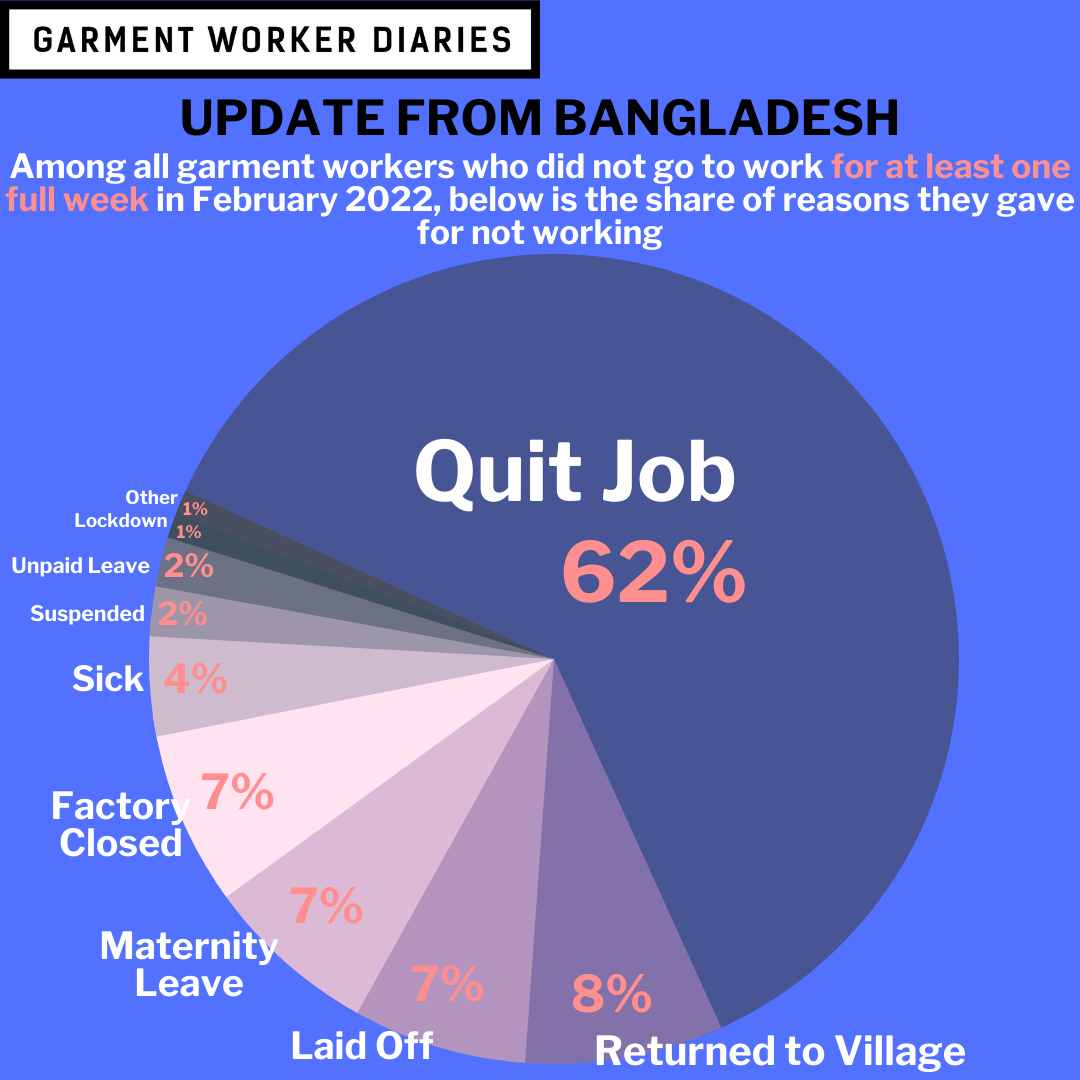 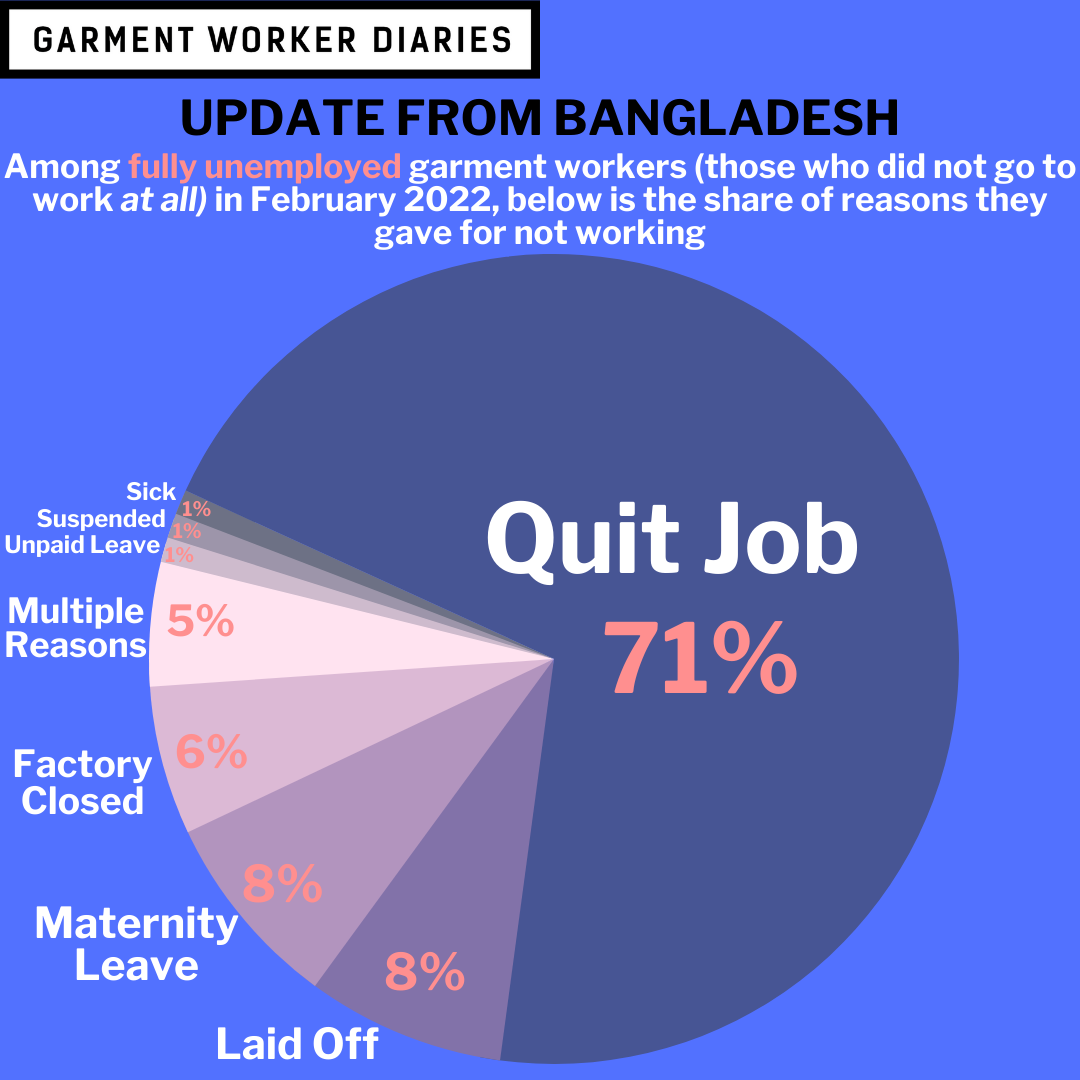 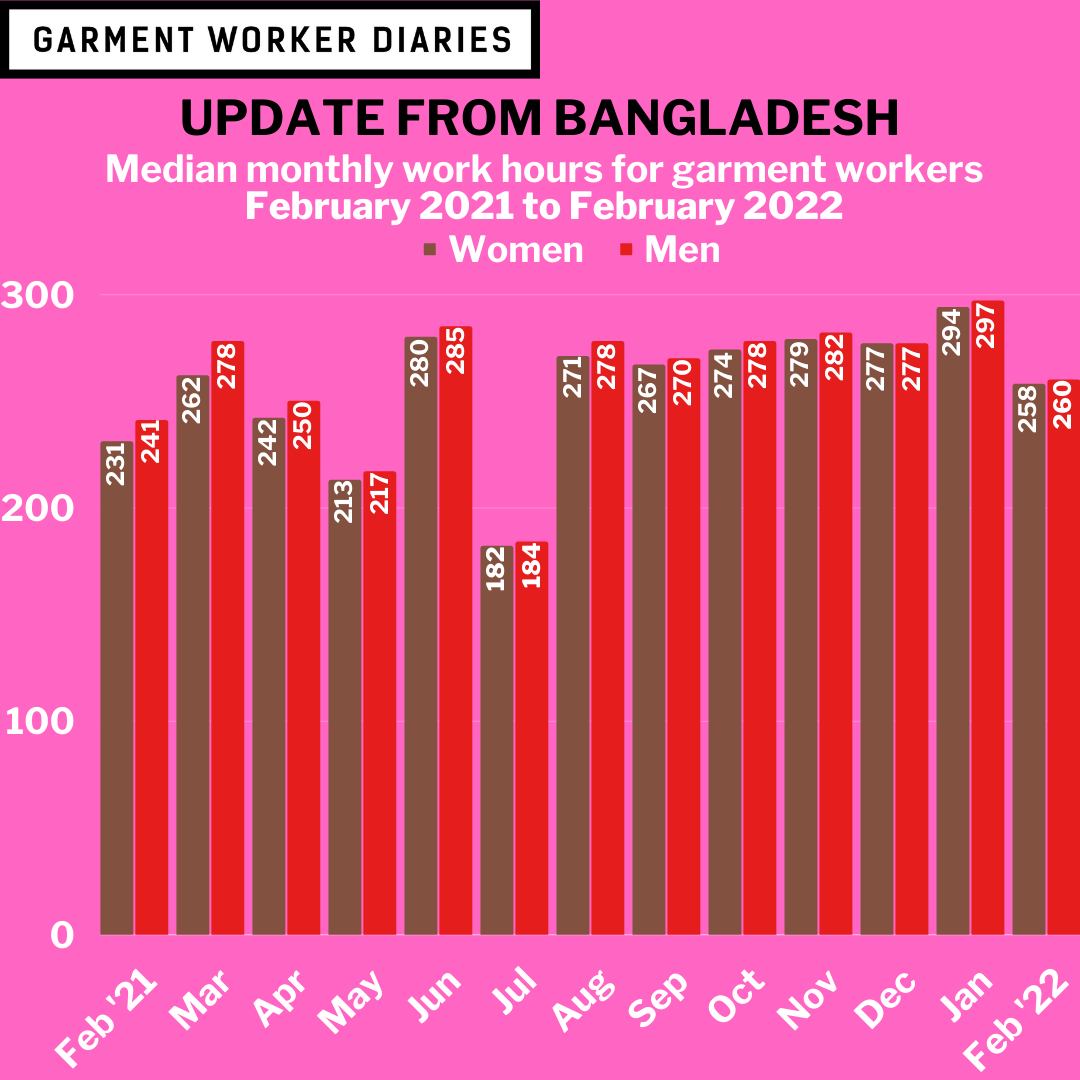 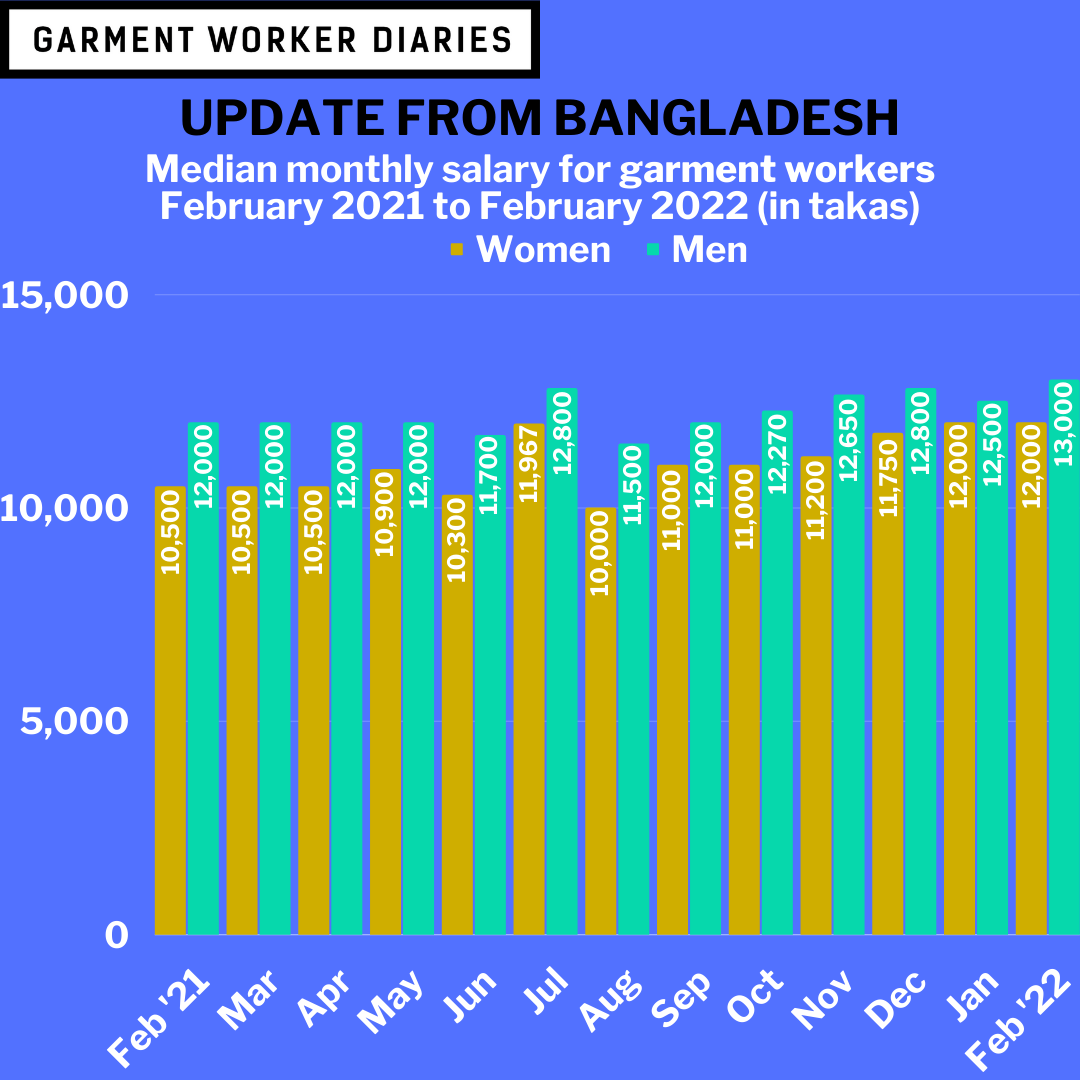 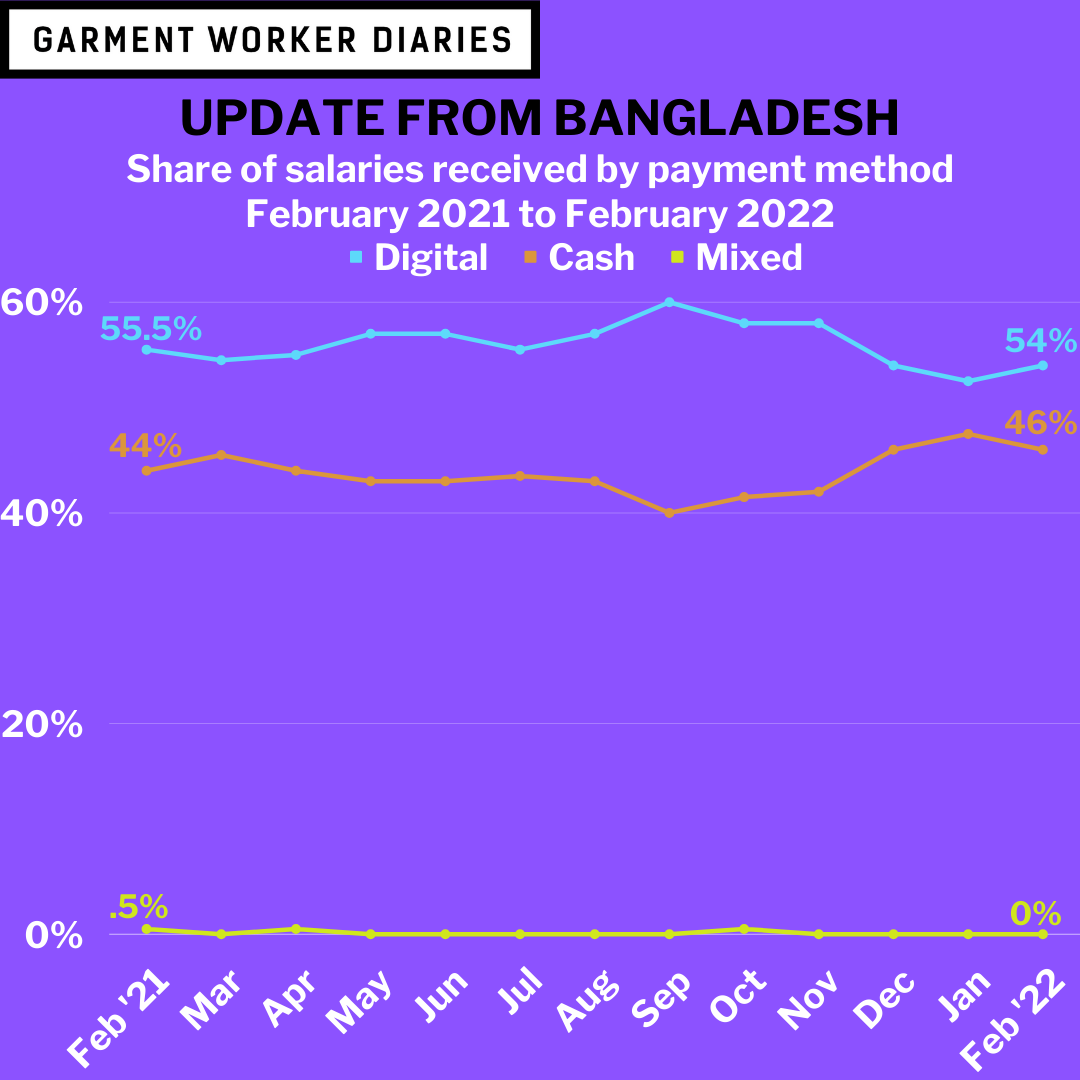 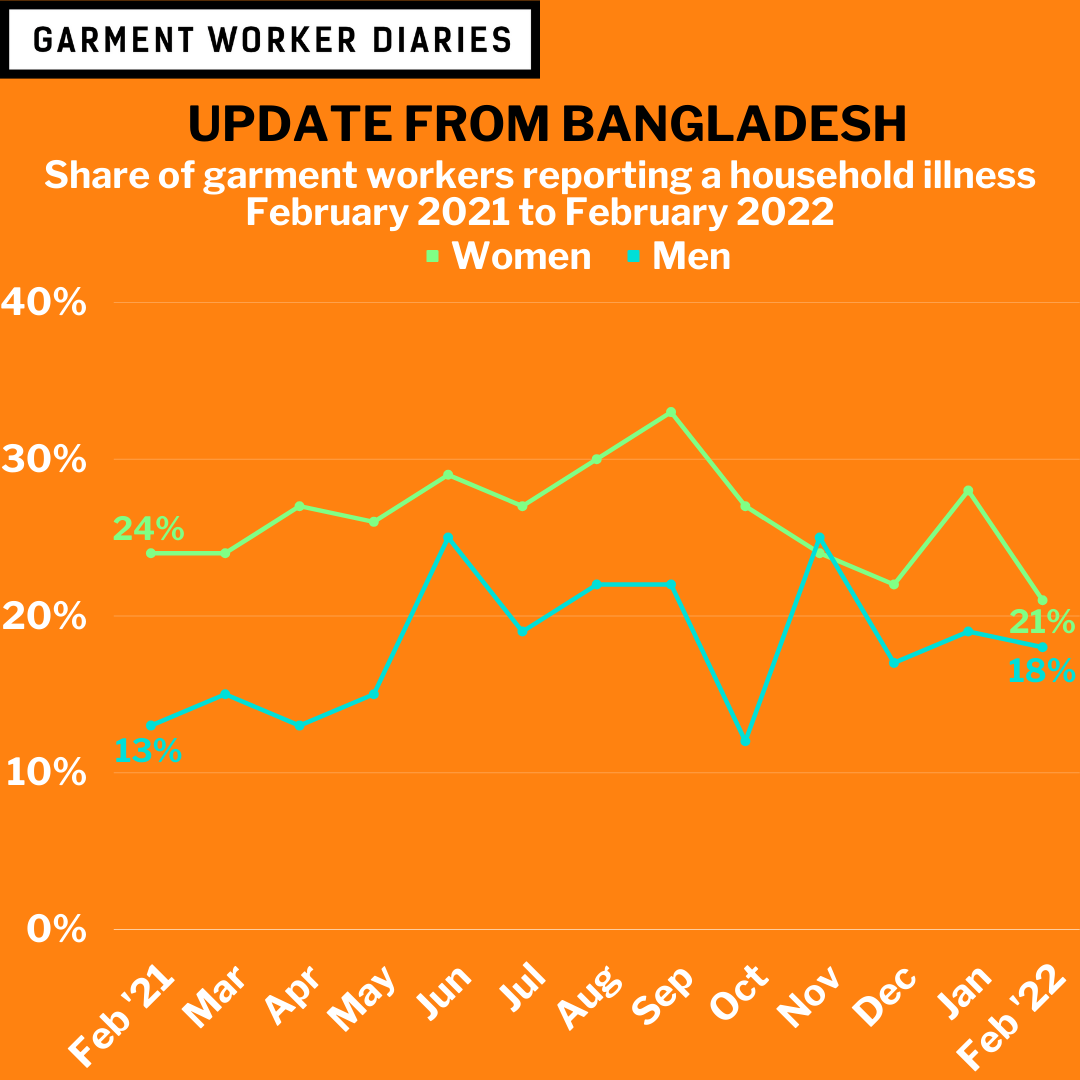 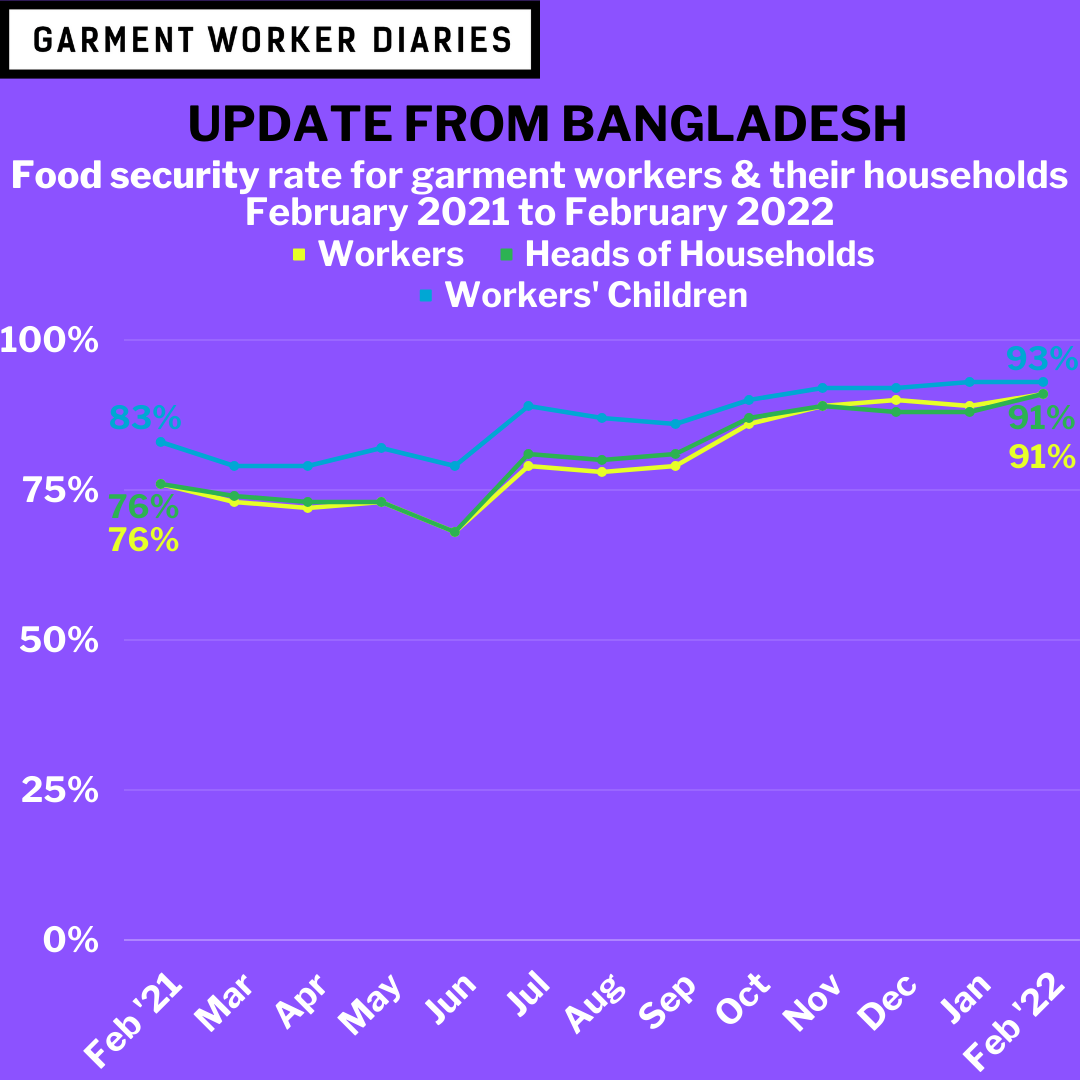 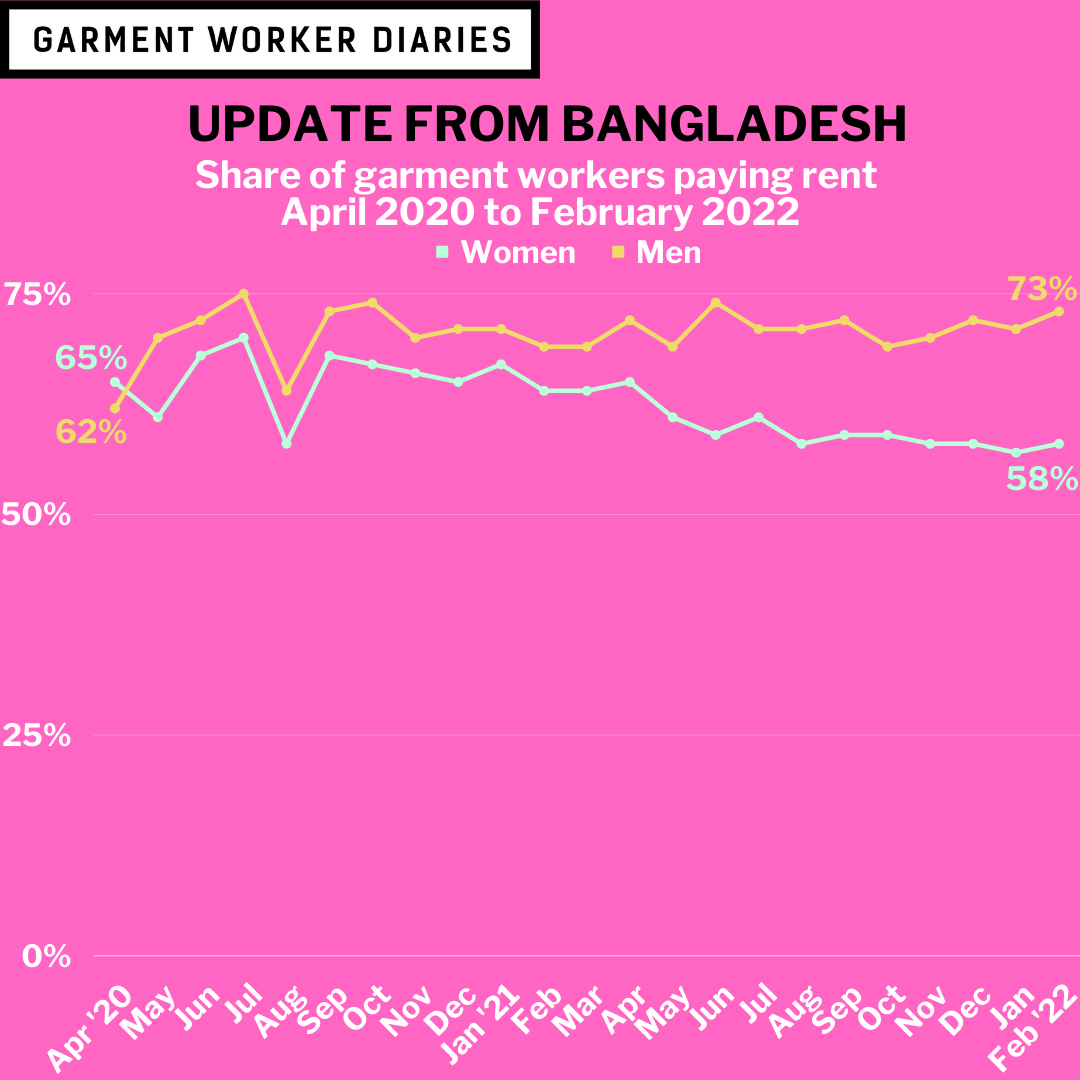 84% of all garment workers went to work at some point in February 2022 (including 82% of women and 91% of men). Median hours worked fell back to a more typical number from their study-high in January to 259 for all workers last month (258 for women and 260 for men). But, February was a short month with only 24 working days, so the typical number of hours worked per day was just under 11 hours, very close to the legal maximum. This suggests, again, that many workers are working excess hours.

Among respondents who did go to work in February but also missed at least one full week of work or more, the reasons for not working were reported by respondents in very similar shares in February as in prior months. Two respondents did tell us that pandemic lockdown conditions prevented them from reaching their factory, a type of response we had not seen since October 2021.

Among respondents who were completely unemployed (meaning they did not go to work at all during February), the reasons for not working were likewise reported with very similar frequency as in prior months. Ten of the responses we received, representing 5% of all respondents, listed “multiple reasons” for not working, indicating that their long-term unemployment cannot be attributed to any one factor.

83% of garment workers (including 80% of women and 90% of men) received a salary payment in February 2022. This is a 4% bump back up to more normal levels compared to January, when 79% of workers got a paycheck.

We’d speculated last month that we might see an increase in typical monthly earnings in February due to the extremely high number of hours worked in January—as regular readers of this blog know, wages for hours worked in a month are paid in the early part of the following month. As with all things related to the lives of garment workers in Bangladesh, what in fact happened was more nuanced. Typical monthly earnings for all workers in February, Tk. 12,000, were identical to the typical earnings in January, even though the typical worker worked about 20 fewer hours in December than in January. But, there was a gender difference in pay. A typical woman’s earnings in February (for work in January) were Tk. 12,000, the same as in January (for work in December). But a typical man’s earnings were Tk. 13,000 in February, a Tk. 500 increase over the typical January amount and the highest recorded in the study since April 2020 (excluding Eid-observance months). This gender difference was not due to a difference in the number of hours worked—as noted in our previous monthly update, the typical man and woman worked the same number of hours in December and the typical man only worked three hours more than the typical woman in January. The difference in hours worked is hardly enough to justify a Tk. 500 increase from January to February for men and no increase for women.

These results have troubling implications. First, these data confirm a pattern we have often seen in the data—more hours worked do not always translate directly into more pay, especially when it involves excess hours worked. Second, the most recent data suggest that this negative pattern is more likely to hold true for women than men. We will be digging into the data more thoroughly over the coming weeks to provide a more detailed understanding of the relationship between wages and work. As we do this, we would encourage all stakeholders to pay attention to this issue, especially in the light of coming EU legislation regarding due diligence in supply-chains, which will hold corporations selling in the EU market accountable the wage non-compliance of their suppliers.

The proportion of garment workers engaging in financial transactions and the shares of those transactions that were either digital or in cash looked very similar in February 2022 compared to prior months.

However, there are a few notes worth making here about the high typical amounts of certain transactions, which again could be a result of the high salaries workers earned in February. The typical intra-household transfer amount last month, Tk. 5,000, is tied with January 2022’s amount for highest yet, and the typical loan repayment amount, Tk. 3,000, is in a three-way tie with January 2021 and September 2020 for highest in the study so far. As for loans garment workers gave to others, they doubled the previous high of Tk. 1,000 as the typical loan given in February was Tk. 2,000. Finally, the typical amount of money transfers garment workers sent outside the household, Tk. 2,400 (Tk. 2,000 for women and Tk. 3,000 for men) was the highest in the study so far. Over half (57%) of those transfers were sent digitally and most of the money went to family members of garment workers.

Lastly, the monthly rent payment gap between women and men widened ever so slightly in February 2022, as 58% of women and 73% of men reported making a rent payment (62% of garment workers overall).

Food security rates were at their highest ever in February 2022, with 91% of workers, 91% of heads of households, and 93% of workers’ children reported as having enough to eat during every week of the month. And, as we speculated last month, the increased food security rates could be due to workers having as high or (for men) the highest typical earnings than during any other month in almost the past two years.

The household illness rate fell six percent in February 2022 compared to January, as 20% of all respondents reported a household illness (including 21% of women and 18% of men). Most of the decrease is attributable to women reporting illness less frequently.

The data are drawn from interviews with about 1,300 workers interviewed weekly from April 2020 to February 2022. The number of worker responses in a particular month varies depending on interview participation rates throughout the month but were never below 1,206 during this period. These workers are employed in factories spread across the five main industrial areas of Bangladesh (Chittagong, Dhaka City, Gazipur, Narayanganj, and Savar). Just over three-quarters of the working respondents are women, roughly representative of workers in the sector as a whole.

Link to Other Monthly Updates