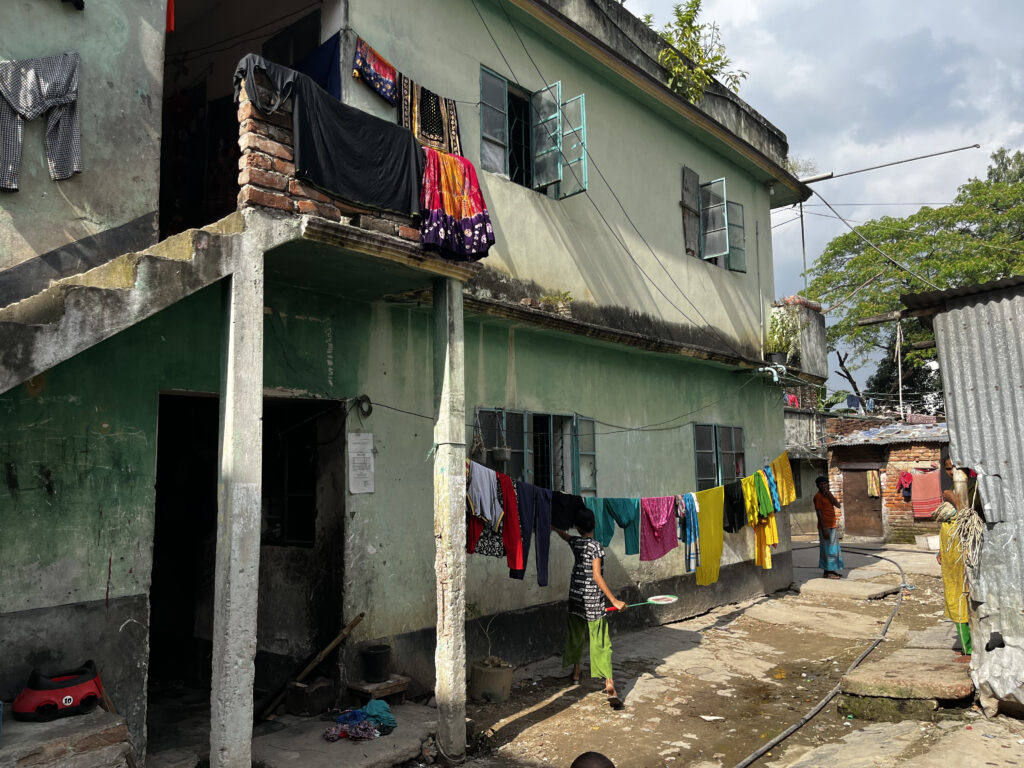 In part one of our “Living Wage, Living Planet” blog series, we presented our theory that paying garment workers in Bangladesh a higher wage would be good policy not just for workers but also for the environment. In part two, we reported the results of our living wage calculations based on an adjusted version of the The Anker Methodology. In this blog, we present an updated calculation based on new data related to food and housing collected 6 months later. In addition to presenting our new living wage numbers, this blog will provide more information about workers’ housing preferences. Future blogs in this series will present findings related to food costs and the technical aspects of the methodology behind our calculations.

Living Wage and the Wage Gap

According to our calculations we estimate the monthly minimal living wage range in Bangladesh to be in the following range—as we discuss in more detail later, we provide a range for the living wage based on different assumptions about the costs of housing:

To make up for this gap, workers increasingly rely on overtime and excess hours (work hours that go beyond the legal limit) to make ends meet. For instance, a typical worker reported a median of 290 work hours in June 2022 and the median for Q2 was 248 hours—a number that was depressed by the Eid holidays in that quarter. Even then, the gap between what they earned each month in Q2 2022, and a minimal decent wage is between 45% and 49%.

We have chosen not to strictly follow the Anker Methodology, given the inherent difficulty in attempting to define what constitutes decent housing in a context where a typical living space for a garment worker and her family is one small room with one window and door, and a kitchen and a bathroom shared with nine other households. Instead, we used a range of housing costs in our calculations based on what we have learned about the workers’ current living conditions over the years as well as what they believe constitutes “good” or “bad” housing.

For context, I’m writing this blog from Bangladesh and last week I visited some areas in Dhaka. The photos below are from a house unit in Mirpur, Dhaka where one of our respondents lives with her teenage son. The rent for this unit is Tk. 5,000 per month, she earns approximately Tk. 11,000 per month through her work as a garment worker and complements her income through domestic work when she is not working in the factory. Her dream is to live in a place with an attached bathroom and kitchen. 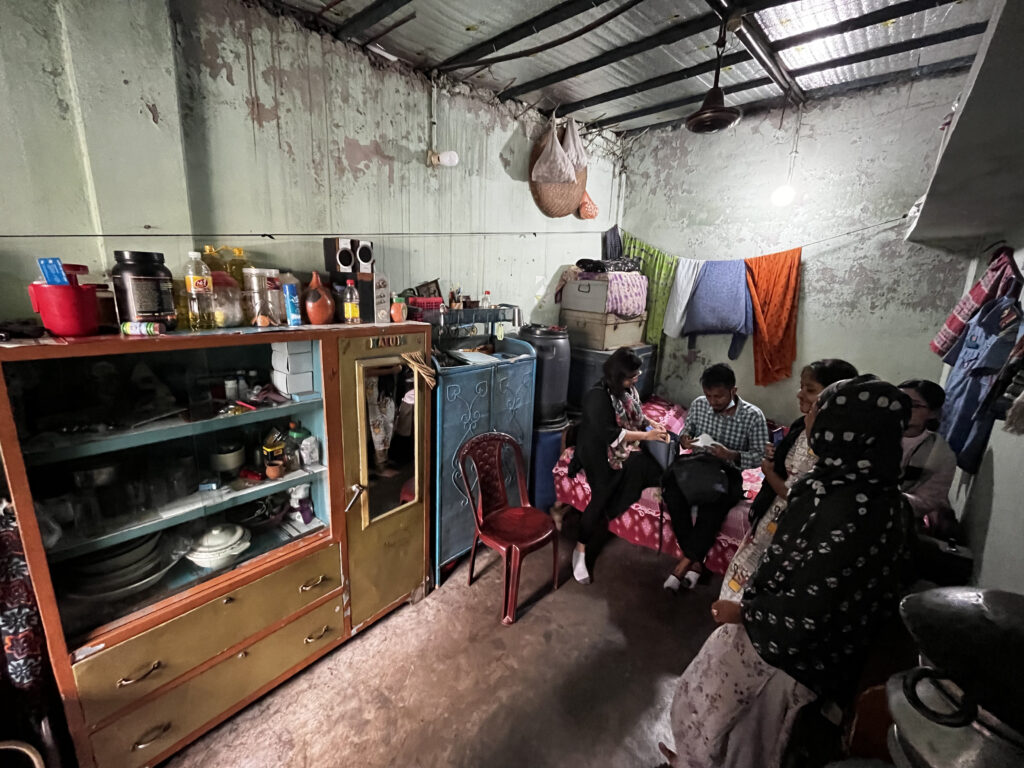 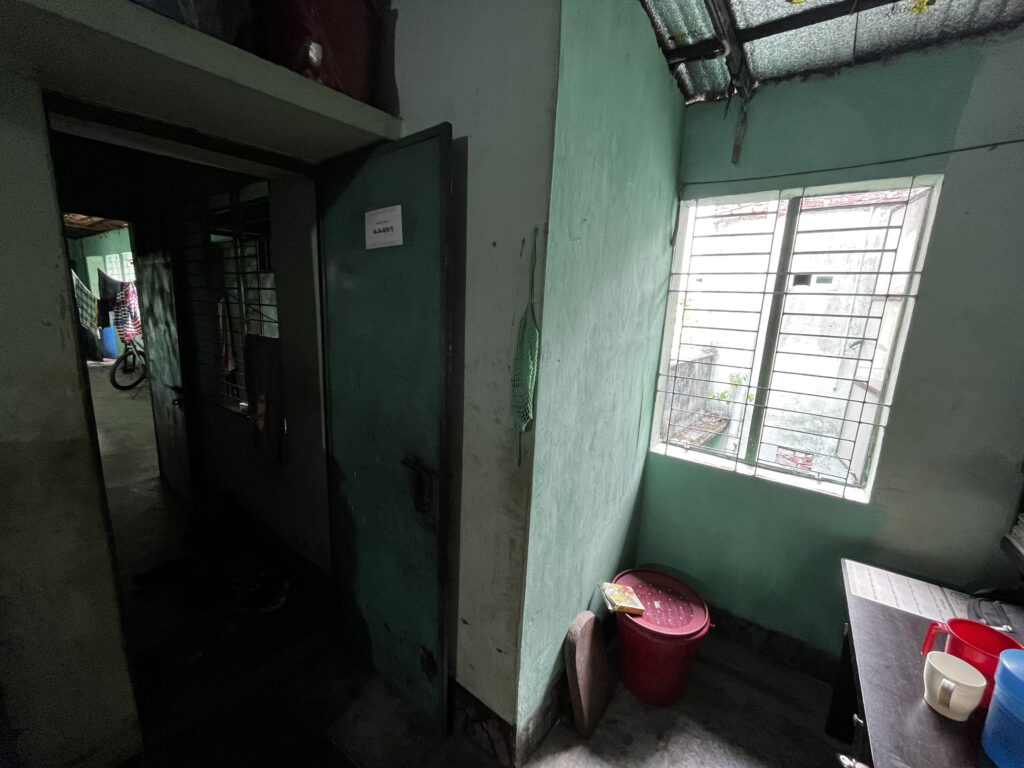 Decent housing, according to workers

Last month, we asked the worker leaders from our sample to imagine and describe the main characteristics of a housing unit that they would be happy to live in because it met all the requirements of a good house. Most answers focused on access to basic services and utilities, having more space and being able to go cook or use the bathroom without having to wait in line. Having a balcony was also a very common response. 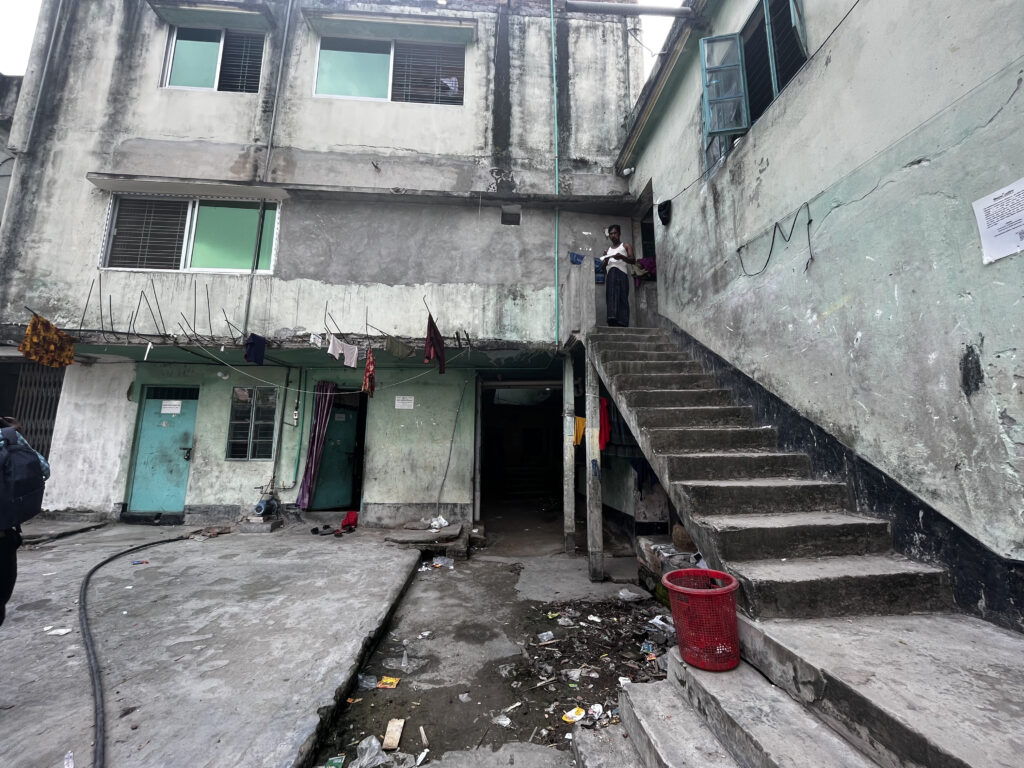 “It should have enough space to move, there will be trees, there should be kitchen and attached bathroom and everything should be neat and clean” worker from Narayanganj

“A bigger room, separate room for every member of the family, a balcony, enough light and air, attached bathroom and kitchen, good supplies of utilities like electricity and water” worker from Narayanganj

“There will be light and breezes, a nice flat, there will be window, balcony, bathroom” worker from Chattogram

“Separate washroom and kitchen facilities, enough water for daily use, didn’t need to wait to go in the washroom, no quarrel with others.” worker from Narayanganj

“A big house where a big family can live together. Everyone will have separate room with attached bathroom, with utilities like water, gas and electricity available.” worker from Savar

“It should be near my factory. In this way, I will need less time to walk on foot to reach the factory. The street should not be soiled. The house should be separate balcony, separate washroom and kitchen, gas, electricity, and water should be available.”  worker from Gazipur

“An apartment flat would be good because one can freely use washroom and kitchen whereas it becomes difficult to use them in a rented house. Everything will be attached within two rooms” worker from Narayanganj

In the same survey, we asked them to describe a housing unit that they believed was not a good place to live, but one that they have seen in the area where they live or near where there are garment factories. Most of the answers described crowded rooms, problems with water, gas and electricity supply, and the difficulties of living and sharing common spaces and facilities with many other households.

Figures 7 and 8: A typical kitchen shared with several other households 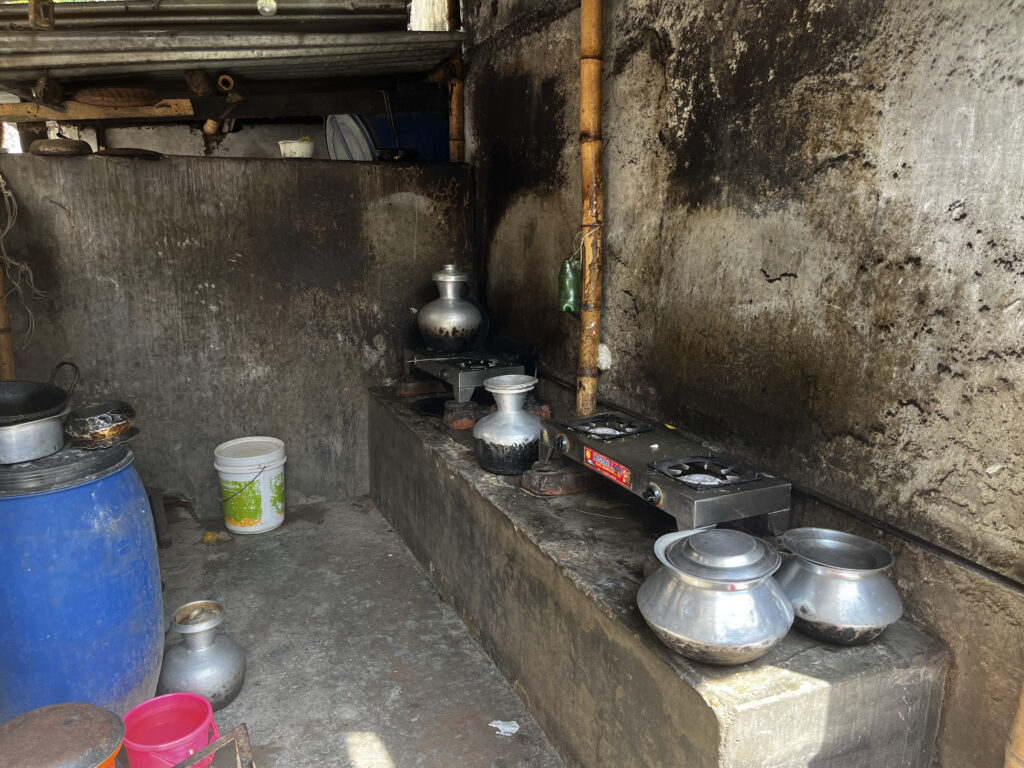 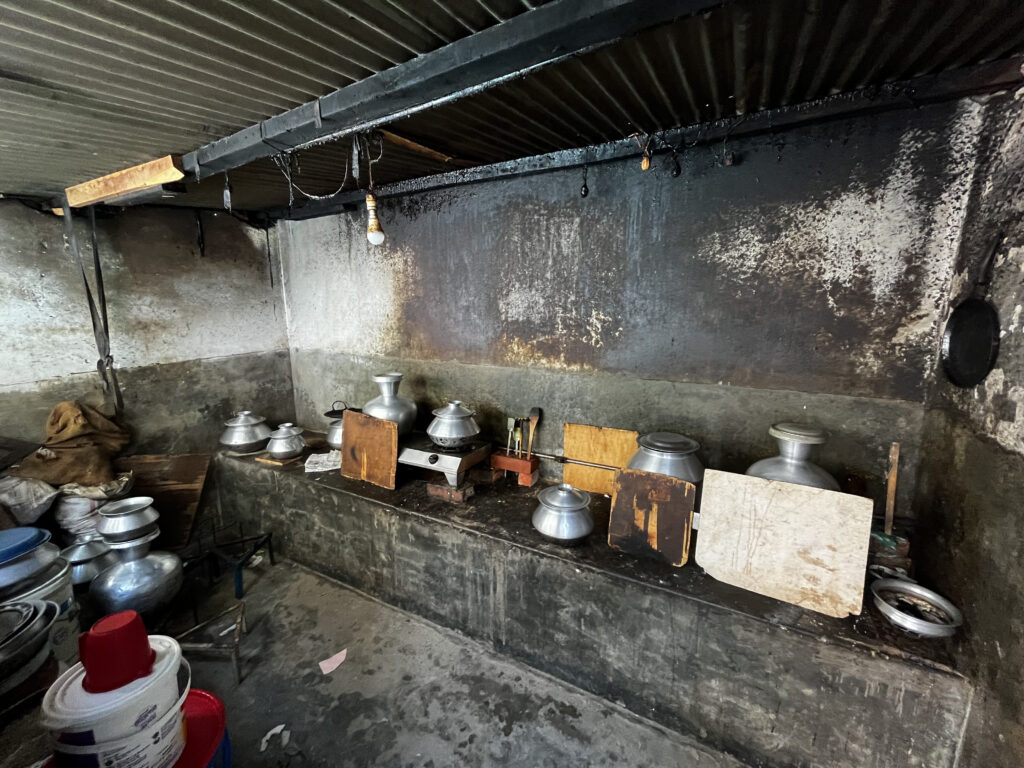 “The apartment flats situated in the lower floors have very low quality, many times water rises up on the floor there.” worker from Chattogram

“Gas, electricity, water problem, many people residing in the same house, sharing kitchen, besides there are many problems among tenants” worker from Narayanganj

“No water or electricity, streets are not good, water rises up in rainy days, bad environments” worker from Chattogram

“Many people live together, that’s why cooking, bathroom everything becomes problematic. And there are too many house around, so there always remains dark in the house” worker from Narayanganj

“Some houses have 9 to 10 tenants but has only one bathroom and two furnaces, cooking, washing and bathing there are some kind of an ordeal” worker from Narayanganj

“Most workers live in tin shade colonies, 20 to 25 rooms in a single house. General bathroom and kitchen.” worker from Gazipur

“Electricity, gas and water facilities not available always, and there is always too much gathering” worker from Dhaka

“Bad water, quarrel always, need to share washroom with others, didn’t get a chance to use washroom or kitchen in emergency.” worker from Narayanganj

“Always fighting going on, no water supply, dirty environment, not a chance of peaceful sleep” worker from Narayanganj 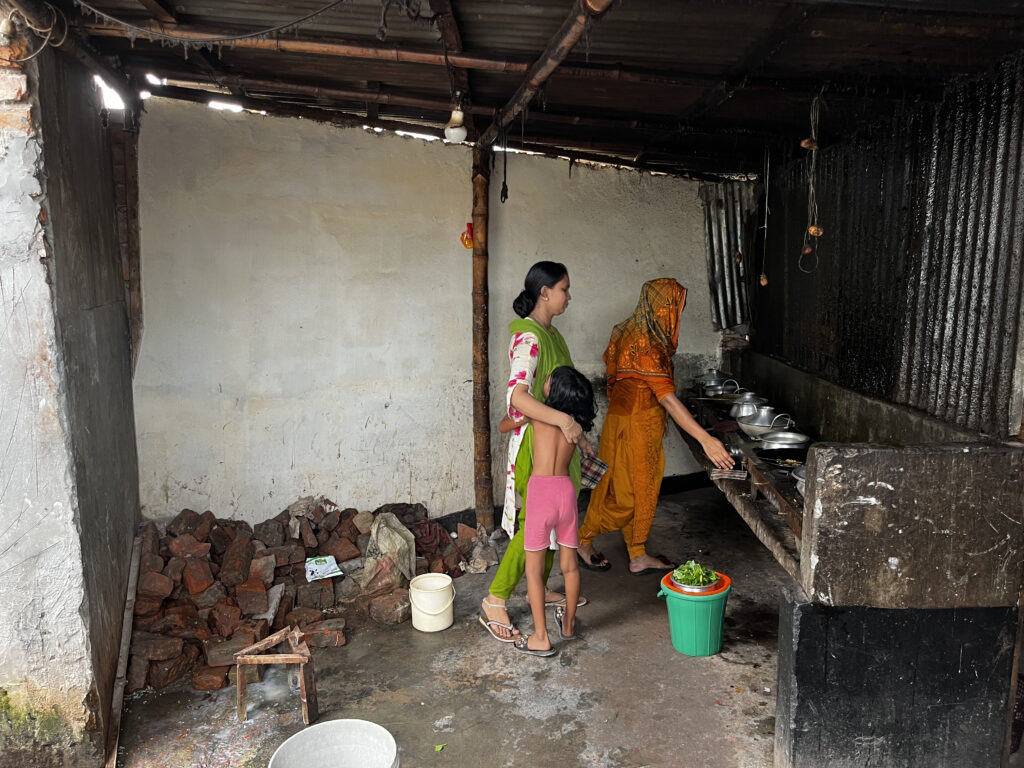 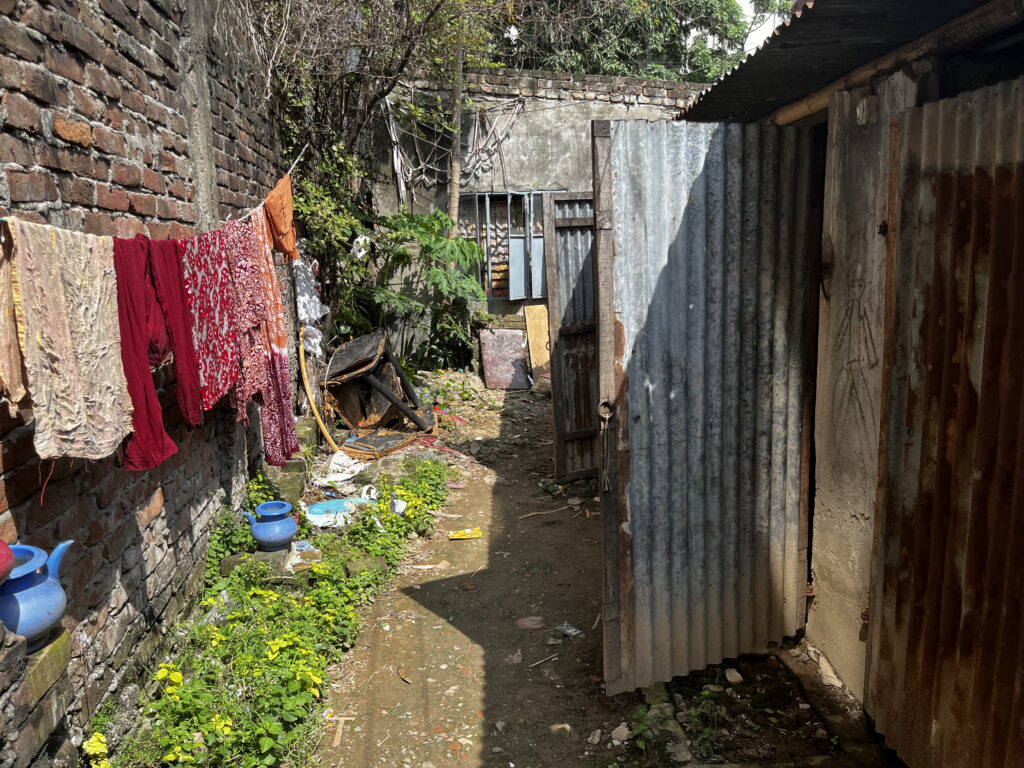 Based on this, we calculated two different housing scenarios for our living wage calculation, both based on a household of 4:

The data presented here are from several different surveys conducted by MFO and SANEM through the GWD channel of communication. This channel connects with about 1,000 workers every week, of whom 74% are women and 100 are worker leaders who support the project in various ways. We collect housing expenditure data weekly and included additional surveys to collect data on different household expenditures for the calculation of the Living Wage.