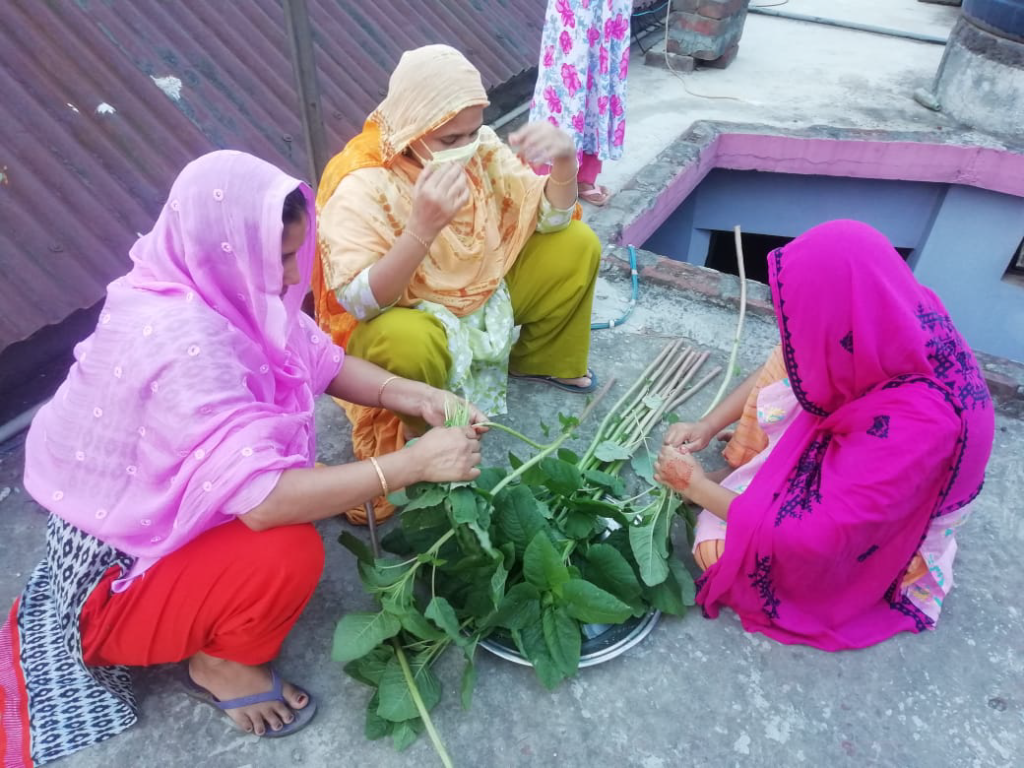 In our last monthly update, workers took leave from work to celebrate Eid-al-Fitr and as a result, we noticed a decrease in the work hours as well as salary payments as they received their salaries in advance, in the previous month. This week we will provide a June 2022 update as we check how these variables have been affected in advance of workers observing Eid al-Adha in July. 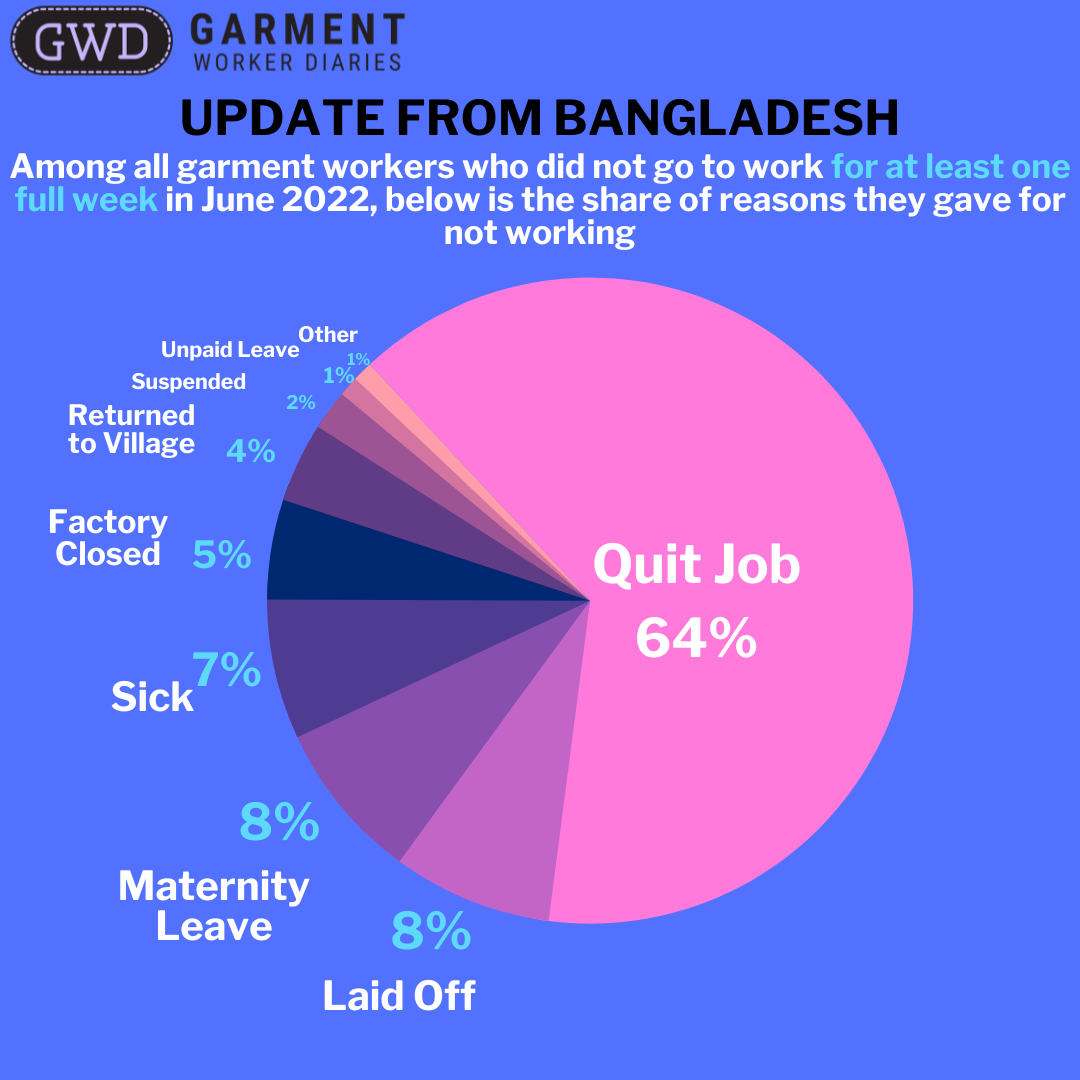 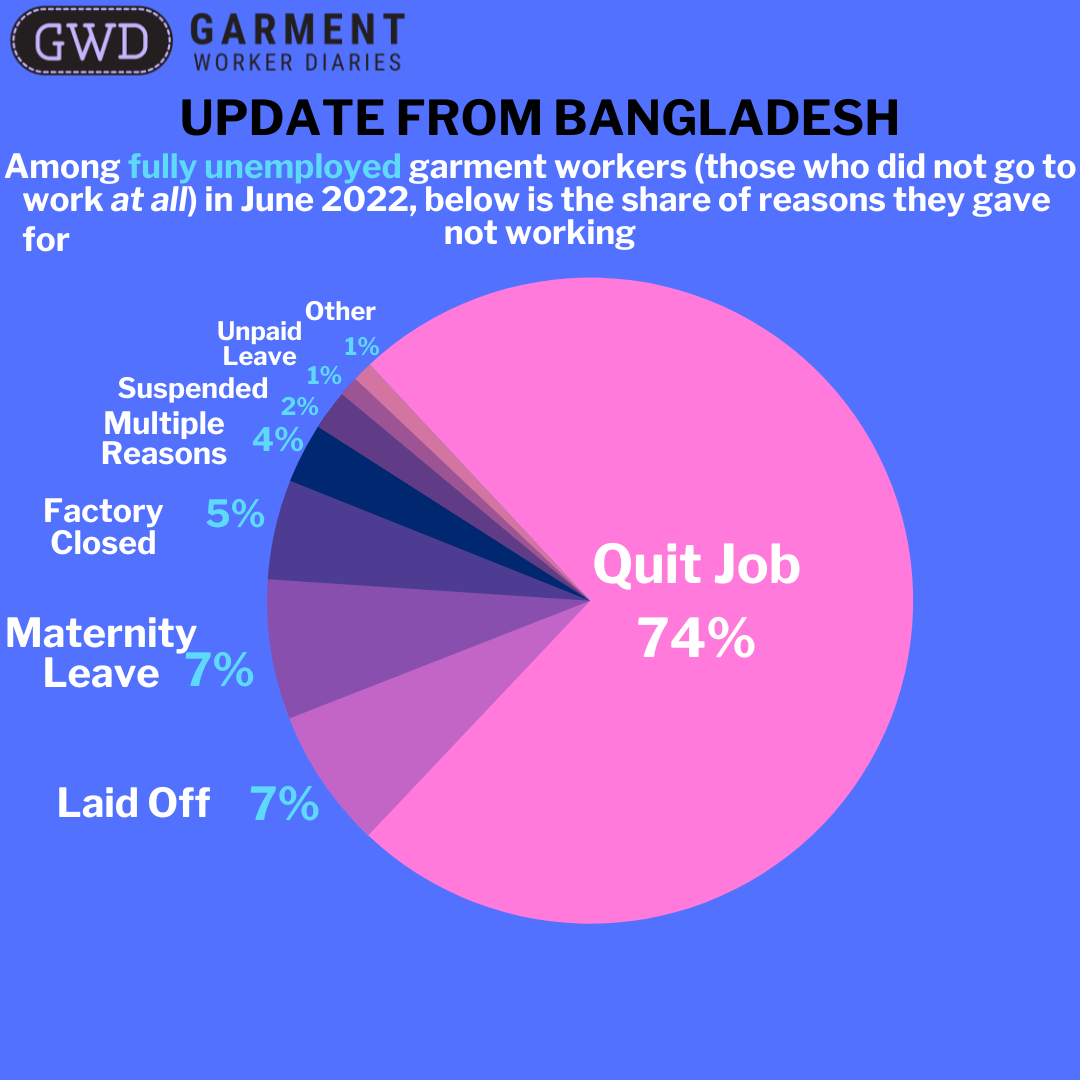 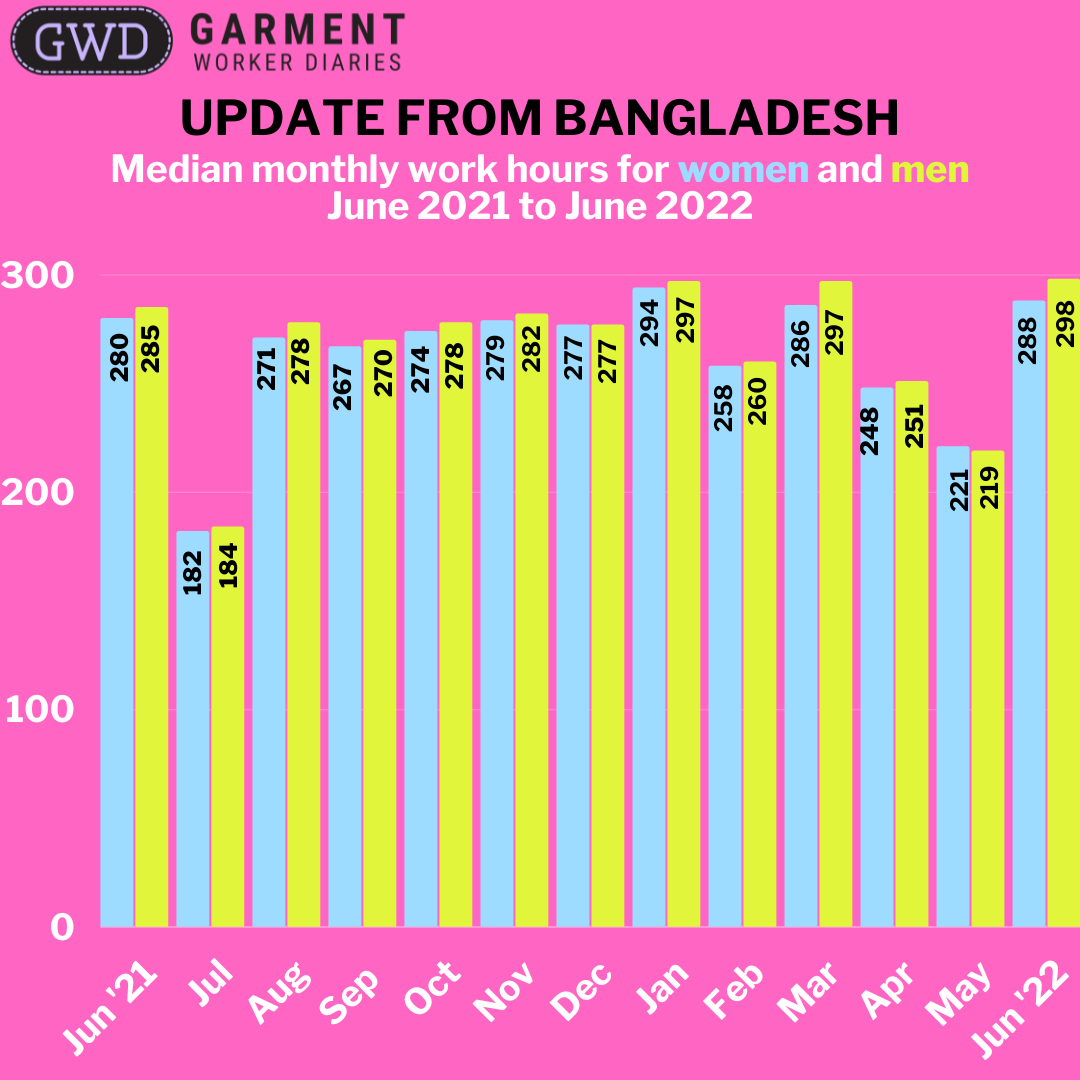 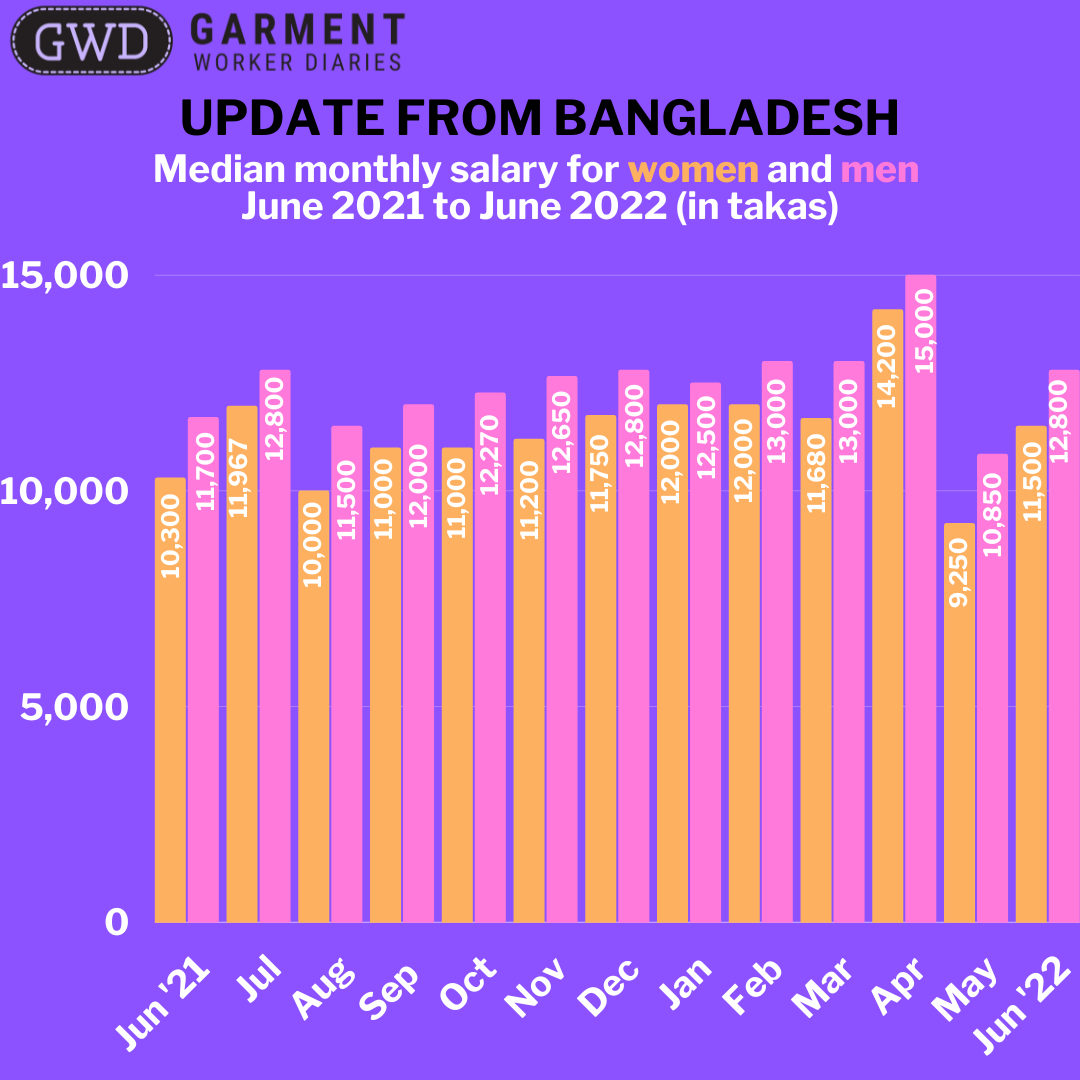 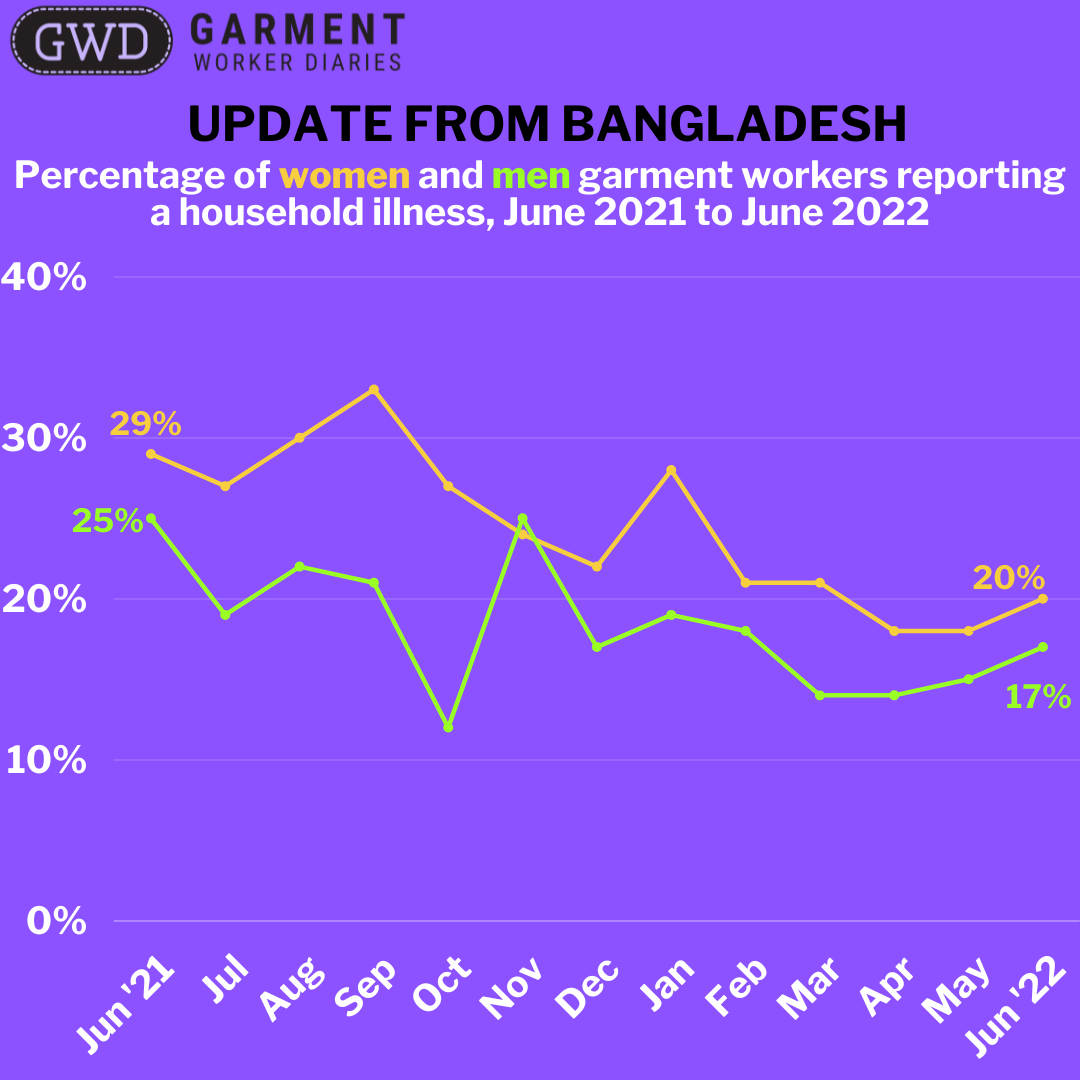 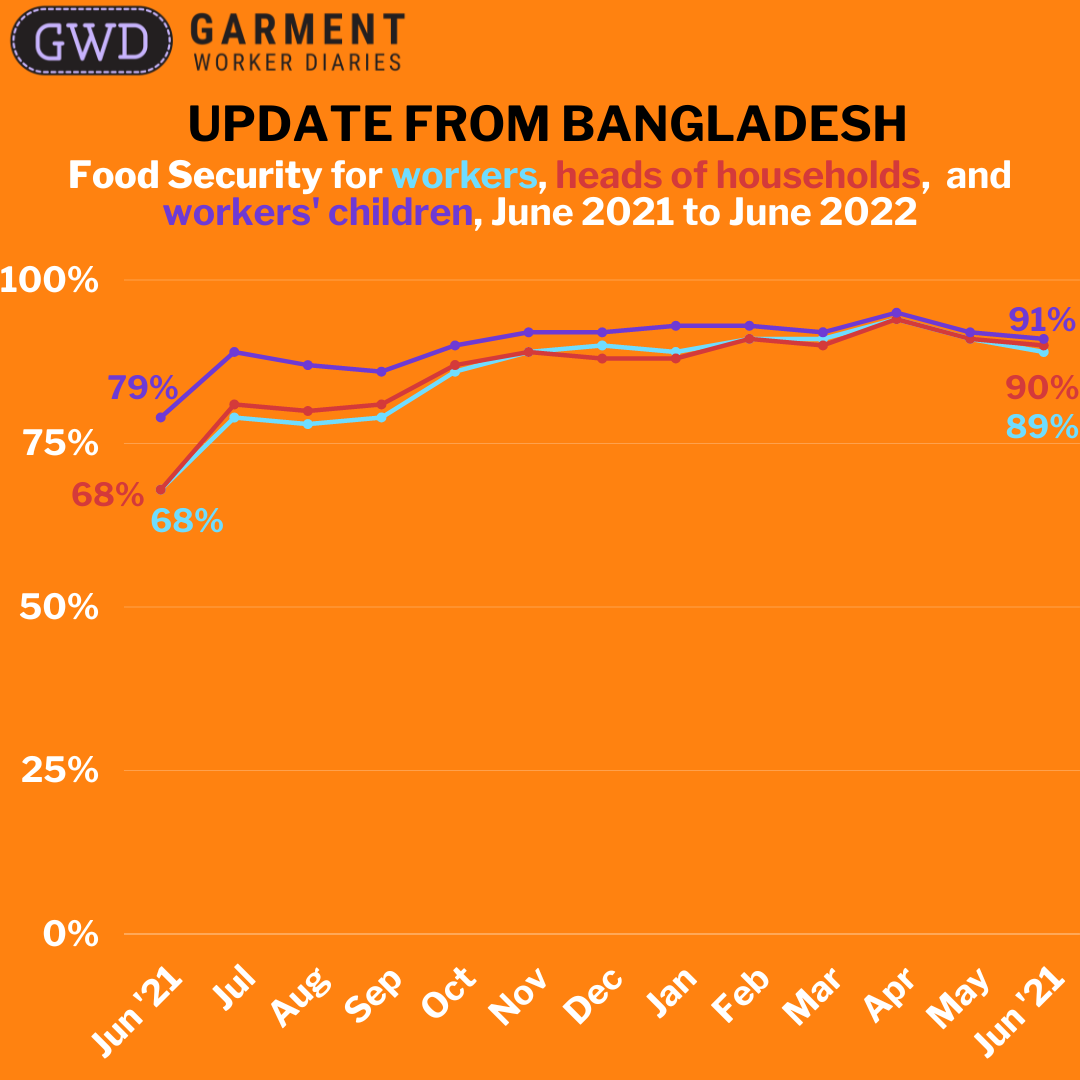 83% of all garment workers went to work at some point in June 2022 (including 80% of women and 90% of men). The median work hours in June 2022 increased to 290 compared to the 220 reported in May 2022 (288 for women and 298 for men). This translates to a typical worker spending approximately 11 hours a day (10 hours of work and a one-hour break), six days a week in the factory during June 2022. This can be attributed to a familiar pattern that often occurs during the months preceding Eid, when workers report high work hours in anticipation of an Eid break in the following month. This was also the case in June of last year, when we reported that the median work hours increased to 282 (up from the 214 reported in May 2021) and then dropped to 183 in July 2021. Following this pattern, a decline in work hours is to be expected in July 2022, as workers take a break from work to celebrate Eid-al-Adha. We will report our findings in our next monthly blog.

One other thing to note, is, as we have reported elsewhere, the government changed the legal limit on work hours in a day, raising it from 10 to 12 hours per day (not counting break time). The data from June suggest that about half (52%) of the workers worked excess hours in June under the old regulations. Under the new regulations, 14% of workers worked excess hours (over 12 hours a day). We will be keeping our eye on whether the excess hours share creeps up—will 12 hours per day become the “new normal”?

Among respondents who did go to work in June but also missed at least one full week of work or more, 64% of respondents reported that they had quit working at their factory similar to what was reported in May.  Other reasons for not working a full week such as being laid off (8%), sickness (7%), maternity leave (8%), and factory being closed (5%) were in line with other months.

In preparation to Eid-al-Adha in July, workers started receiving their Eid bonus in June. By the end of June, 26% of the workers reported receiving an Eid bonus (24% of women and 32% of men), 73% of these bonuses were paid digitally, 23% were paid in cash and the remaining 4% were mixed. The share of workers that received a bonus in advance of Eid al-Adha is expected to increase in our next monthly blog when we consider the ones paid in July.

The share of respondents who transferred money to someone outside of their household was 15%, lower than the 22% reported in May 2022. The amount given was Tk. 3000, double Tk. 1,500 reported in May 2022. Over half, 54%, of the transactions were transferred digitally, 33% in cash, 6% were mixed (cash and digital), and the remaining 7% were a combination of digital transfer with in-kind gifts, cash transfer with gifts, or pure gifts. This is different to what was reported in May 2022 where cash was the dominant method compared to digital (69% vs. 17%). The difference in the mix of cash and digital transfers in the two months can be attributed to the fact that in May 2022 workers went home for the Eid break, were with their families, and were able to hand money to them in cash. In June, they were back at work, far from their families, and sent transfers digitally.

The monthly rent payment gap between men and women narrowed just a bit in June 2022, as 57% of women and 72% of men reported making a rent payment (61% of garment workers overall)

The data are drawn from interviews with about 1,300 workers interviewed weekly from May 2021 to June 2022. The number of worker responses in a particular month varies depending on interview participation rates throughout the month but were never below 1,210 during this period. These workers are employed in factories spread across the five main industrial areas of Bangladesh (Chittagong, Dhaka City, Gazipur, Narayanganj, and Savar). Just over three-quarters of the working respondents are women, roughly representative of workers in the sector as a whole.