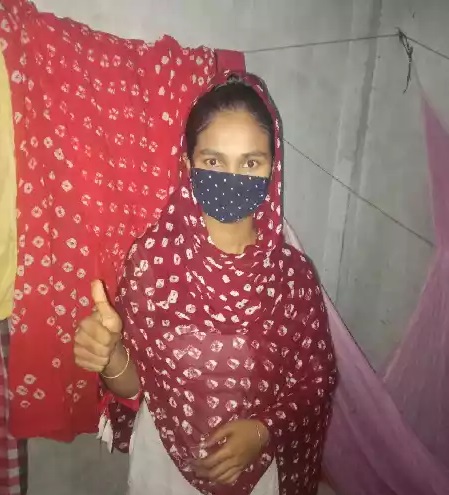 It’s been a few months since we’ve provided readers with an update on the COVID-19 vaccination status among garment workers in Bangladesh. This is because we wanted to provide more information about the demographics of the workers who are receiving vaccination shots, as well as some nuance as to how many doses of the vaccine they’ve received. 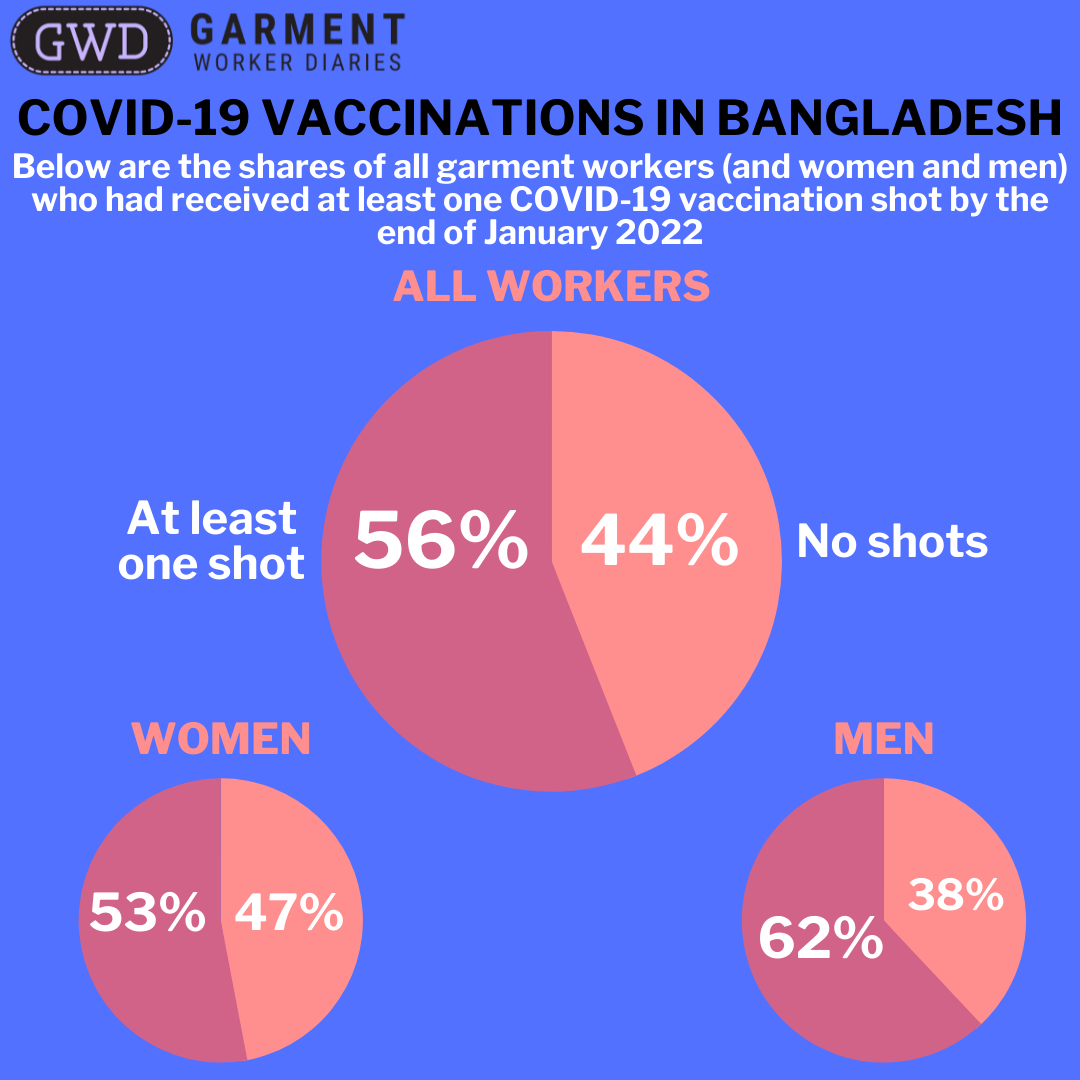 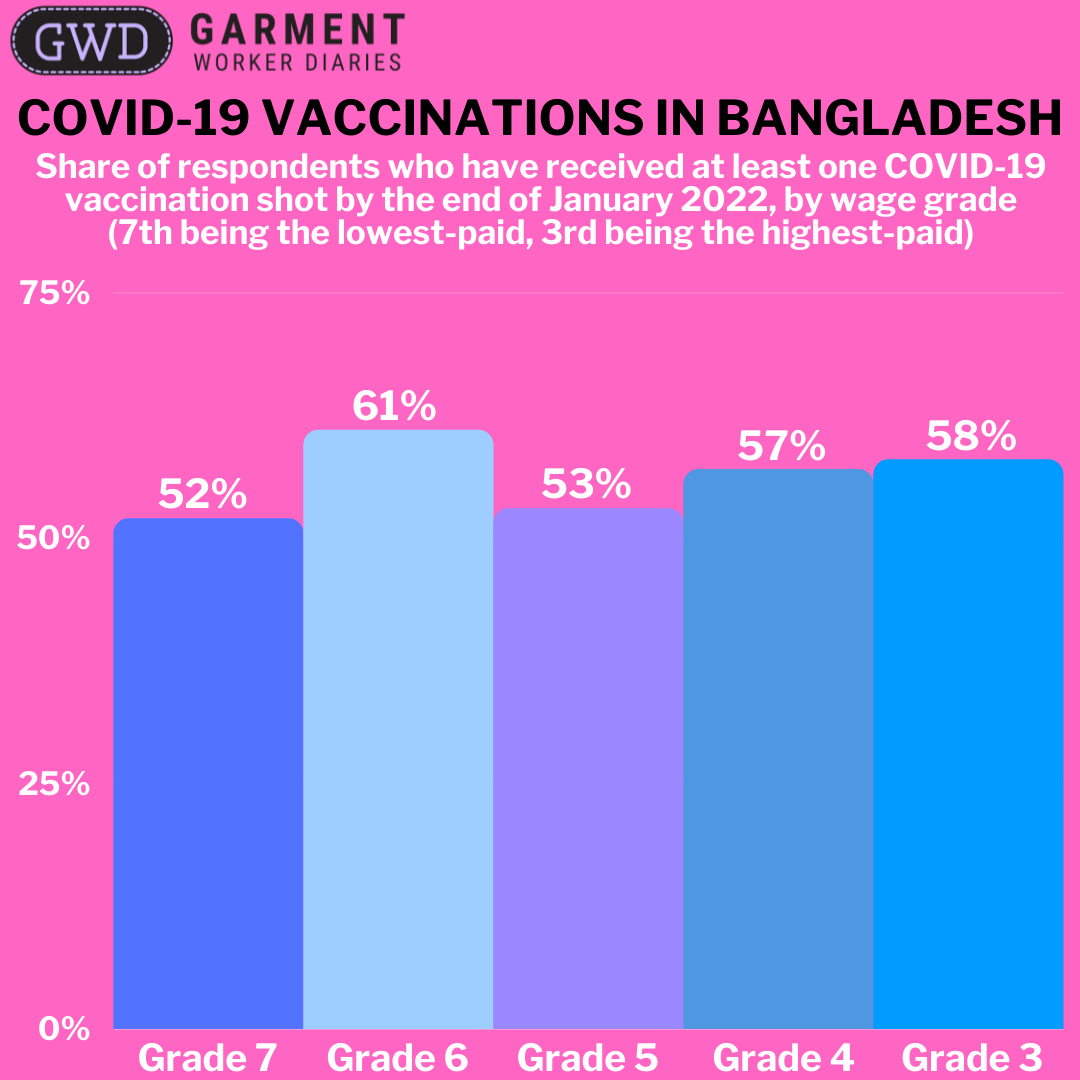 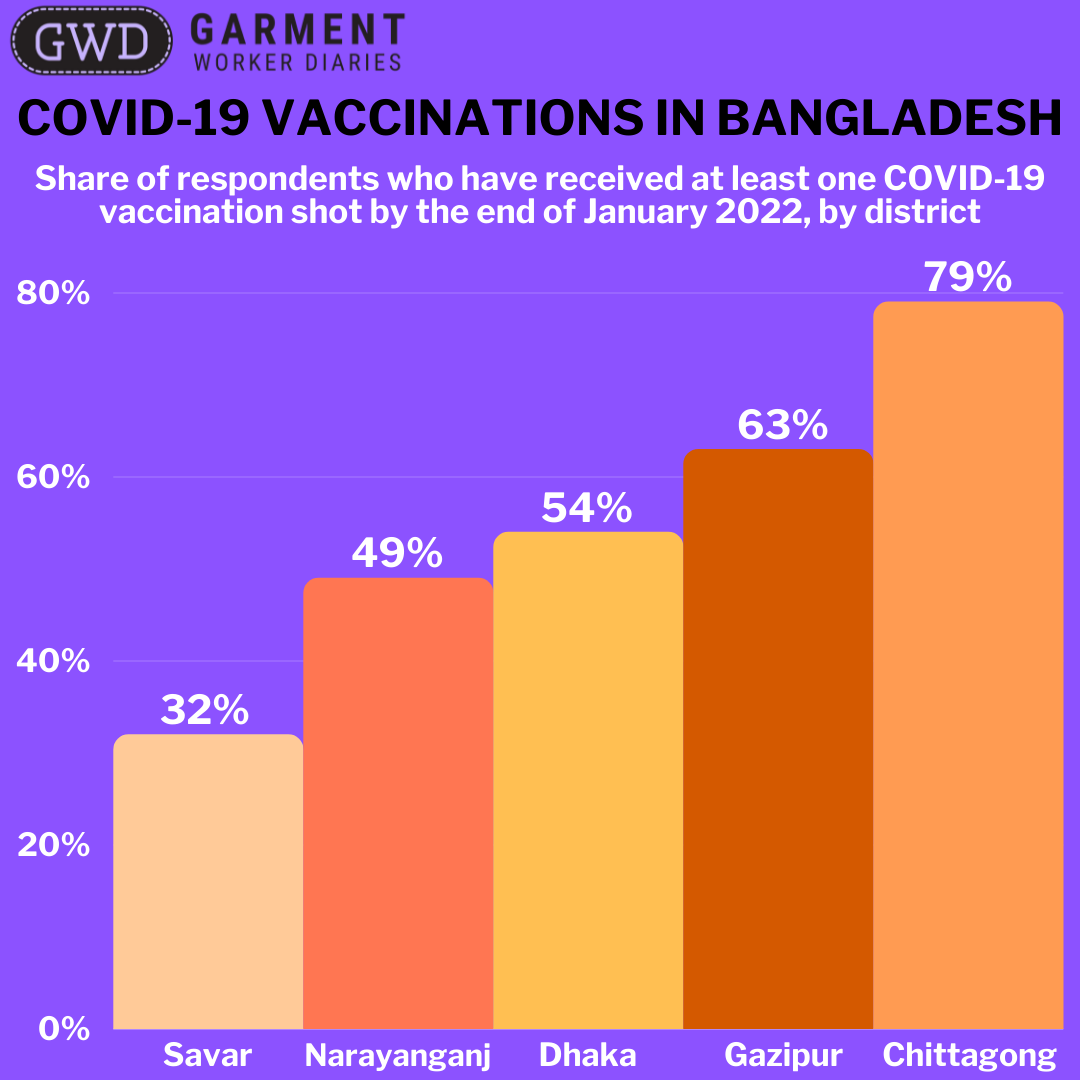 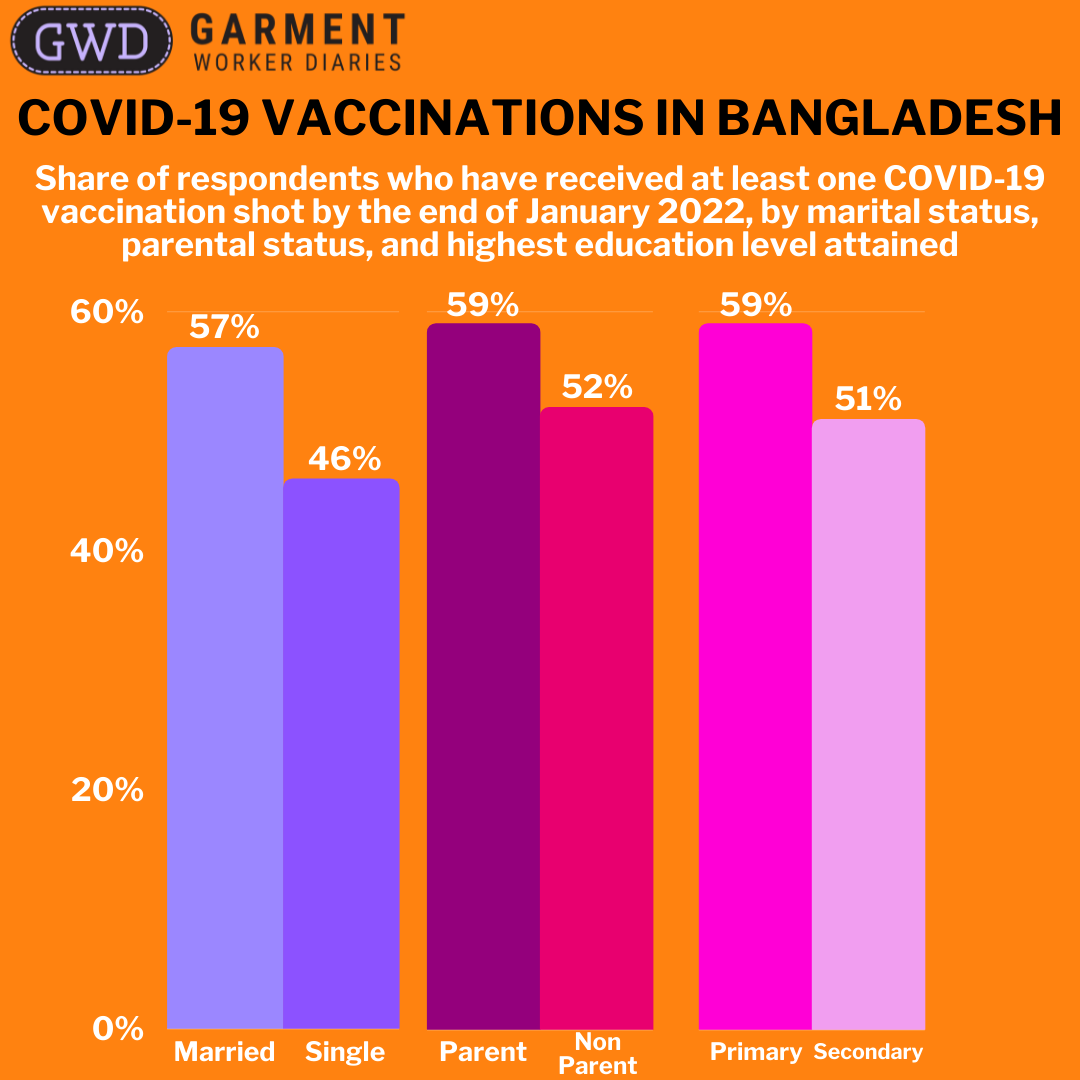 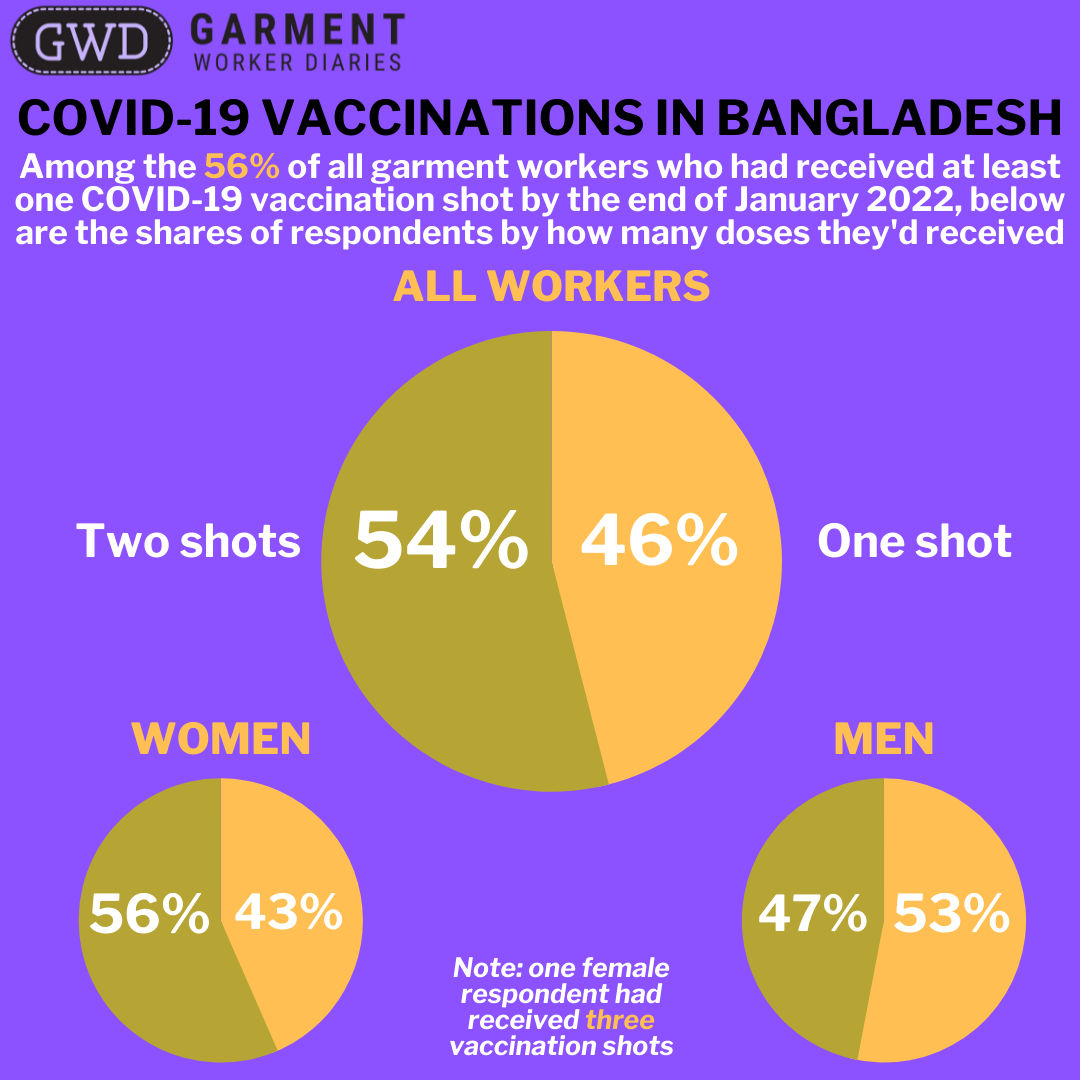 Among all 1,279 respondents (974 women and 305 men) who had been a part of our study since the vaccine became available in early 2021, and were also available to provide answers to a subsequent vaccination survey in late January 2022, 56% had received at least one vaccine shot by the end of January 2022. Women were less likely than men to have received a shot: 53% compared to 62%.

Of that 56% who had received at least one shot, here is the breakdown by number of doses, regardless of gender:

When we add gender to the comparison, women were more likely than men to have reported receiving two doses (even though they were slightly less likely to have received any number of shots):

According to COVID-19 Vaccine Tracker, which uses publicly available data to compile its results, there are seven vaccines approved in Bangladesh. At this time, we do not have information on which brand of vaccination shot workers have received—getting workers to report this to us is very difficult. However, based on a “user manual” published by the Bangladeshi government itself, at least two doses of the vaccine are recommended. It might be safe then to assume that the most readily available vaccines are of the two-dose variety. The one-shot J&J vaccine was approved later than most of the other brands.

Regarding the demographics of workers who had received vaccination shots, some interesting results were uncovered:

The data used for the analysis presented here come from interviews conducted over the phone throughout 2021 and early 2022 with a pool of 1,279 workers. These workers are employed in factories spread across the five main industrial areas of Bangladesh (Chittagong, Dhaka City, Gazipur, Narayanganj, and Savar). Just over three-quarters of the working respondents are women, roughly representative of workers in the sector as a whole.

Education in times of COVID-19: Story of Garment Worker Households