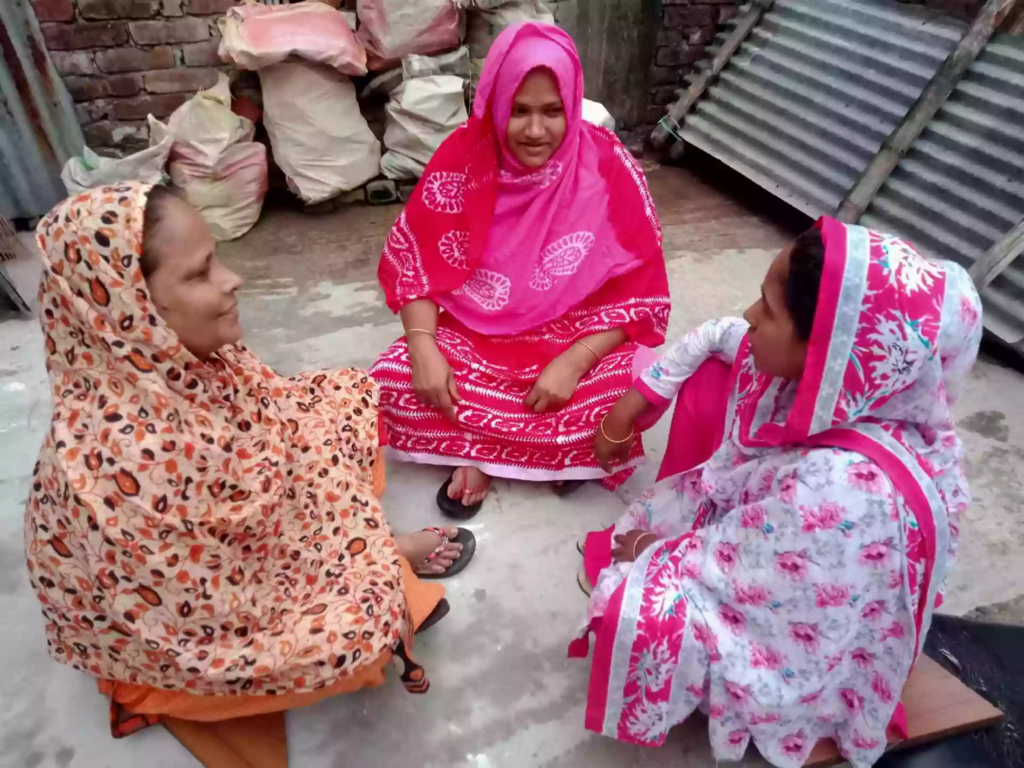 MFO and SANEM wanted to get a better understanding of the role workplace contracts play in the life of garment workers in Bangladesh. We’ll be presenting our findings in two parts. In this blog, we’ll discuss the answers we received from a test run we conducted with our project’s worker leaders. Before we get to those answers, here’s some backstory on our worker leaders.

The current Garment Worker Diaries initiative in Bangladesh consists of 130 worker leaders, and they play an important role within the worker diaries infrastructure. These workers have not been chosen by our field team, but rather emerged organically as leaders among their study group, which is made up of 10 workers living in the same block or very near one other.

Before the COVID-19 pandemic, enumerators would personally visit three groups of 10 workers each, and data were collected directly from the workers in tandem with their diaries (notebooks within which workers enter all of their financial transactions). In those days, there was always one worker in the group that would organize the workers for the enumerator’s field visits or who was trusted by the other workers to keep and share their diaries with the team whenever a worker was unable to be present during the field visit. The worker leader’s role in the study has evolved throughout the years; once COVID-19 hit and MFO and SANEM started collecting data remotely, leaders became instrumental in the recruitment of workers (both when the project restarted in March 2020 and in the ongoing process of replacing dropouts). They also help the field team to test different survey questions. As compensation for these extra responsibilities, worker leaders are provided a higher stipend. As worker diaries initiatives expand, worker leaders are also essential when we build new private survey channels with separate samples on behalf of organizations looking to address specific issues at specific factories.

As mentioned above, we performed this preliminary contract survey with the worker leaders to ensure that our questions were fine-tuned enough to be posed to the entire respondent pool. In the coming weeks, we’ll present the results from the full survey. Right now, let’s take a look at some of the responses we got from our test run.

Regarding payment term responses, one worker leader told us, “Overtime increases my salary to a satisfactory level, so I pay special attention to…overtime”. As we’ve remarked upon in other blogs, many garment workers exhibit symptoms of not earning enough money, chiefly among those symptoms being persistent food insecurity. For some of these workers, working and getting paid for overtime is one way they can earn a livable wage.

For garment workers who were primarily concerned with attendance terms, it seems that the matter of receiving an attendance bonus was the motivation behind such an answer. As one worker put it, “I would not get attendance bonus if I keep being late or being absent”. Another worker’s answer seemed to point to the unfairness of the prospect of her attendance bonus being denied to her for being as few as five minutes late to a shift.

And as one respondent who was most concerned with dismissal terms put it, “If someone’s work is unsatisfactory, they get reprimanded harshly. So I pay the most attention to do my work sincerely”.

Within the coming weeks our field team will be asking the rest of the respondent pool a refined set of questions about contracts, the answers to which we’ll be sharing with you soon. For example, we’ll be asking workers whether they received their contracts in writing, orally or both; whether they’ve ever had to pay someone to secure a job or done the same to secure a family member or friend a job; and whether workers have a clear understanding of what their role at the factory is.

The data presented here come from interviews conducted over the phone with a pool of 114 worker leaders. These workers are employed in garment-producing factories spread across the five main industrial areas of Bangladesh (Chittagong, Dhaka City, Gazipur, Narayanganj, and Savar). About three-quarters of the worker-leader respondents who were interviewed for this survey are women, roughly representative of workers in the sector as a whole.