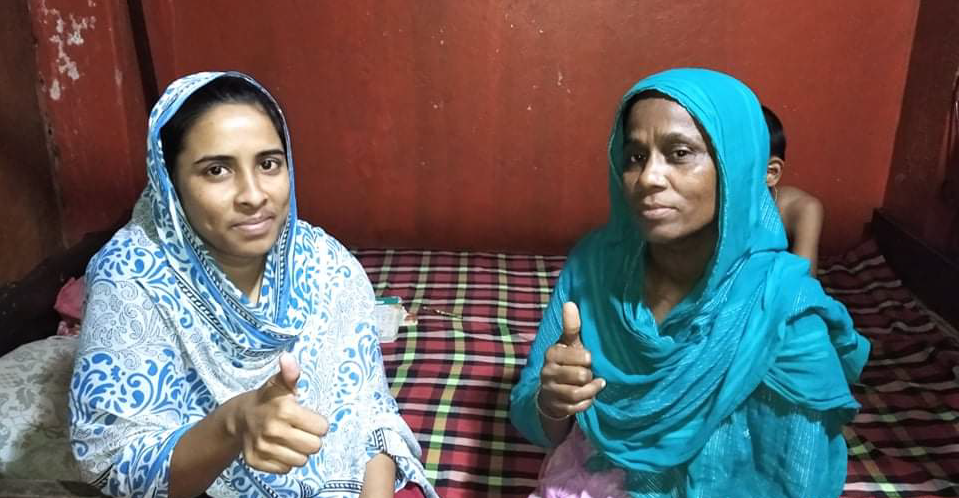 Since our last monthly update, we have covered diverse topics through our blogs including our sample distribution and the risk that climate change poses to the RMG sector in Bangladesh. This week, we will provide an October 2021 update on the core data from our respondents in Bangladesh.

As the COVID-19 pandemic lingers on, our respondents have been working busily, notching the second-highest tally of monthly hours worked thus far in the study since April 2020. Positively, respondents are also reporting somewhat lower rates of household illness compared to the past two months, and also higher rates of food security. Vaccination rates are also on the rise, if ever so slightly. Let’s see what else changed and what didn’t in the study by the end of October 2021…

Similar to the preceding month in September, 85% of respondents reported going to work in October 2021. The share of women vs. men reporting going to work in October was also similar to what was reported in September, with 83% of women saying they worked compared to 91% of men. Typical work hours were 275 for all respondents, which is slightly higher than the 267 reported in September (and as already noted, the second-highest amount of typical monthly hours worked since April 2020, with only June 2021’s typical monthly hours being higher). In terms of typical hours worked for women and men specifically, they continued to report similar work hours in October in comparison to what has been reported in the past few months.

Of the respondents who did not go to work for at least one full week during the month of October 2021, 54% reported the reason for not going to work was because they quit, somewhat higher than the 45% reported in September.

The share of workers reporting transferring money to people outside of their household was 19% in October, in line with what was reported in September.

There are no important changes in terms of the frequency of digital transactions. Cash continues to be the preferred method when it comes to intra-household transfers as well as repaying loans. Unlike the previous months (August and September) where cash was also the preferred method when it comes to receiving loans, “credit” was the most preferred method this month with 43% of the respondents reporting using this method (37% used cash), largely driven by food purchases made on credit which was the highest source of loans this month at 46%.  Digital payments are most commonly used to transfer money to people outside the household (as opposed to cash). In the month of October though, while the share of workers reporting this type of transaction remained steady at 19%, the digital share went down to 47% (from the 58% reported in the previous month).

The food security rates as reported by respondents for the heads of households, their children and the workers themselves have steadily improved over the past few months. Across the board, October’s food security rates represented the best yet in the study since we began keeping track in April 2020. Specifically, this means that only 14% of workers said that they’d not been eating enough, and that only 13% and 10% of heads of households and children, respectively, had not been eating enough. But we’ll keep watching, hoping that number nudges ever closer to zero for everyone.

Among all respondents who have participated in our study since January 2021 (which is when the COVID-19 vaccine became publicly available in Bangladesh), just under 12% had been vaccinated against COVID-19 by the end of October 2021. And from August to October, the monthly share of respondents getting vaccinated has hovered around 3%-4%. Continuing at this rate, it would be sometime in late 2023 or early 2024 when our entire respondent pool will have received the vaccine.

The data are drawn from interviews with about 1,300 workers interviewed weekly from October 2020 to October 2021. The number of worker responses in a particular month varies depending on interview participation rates throughout the month but were never below 1,244 during this period. These workers are employed in factories spread across the five main industrial areas of Bangladesh (Chittagong, Dhaka City, Gazipur, Narayanganj, and Savar). Just over three-quarters of the working respondents are women, roughly representative of workers in the sector as a whole.