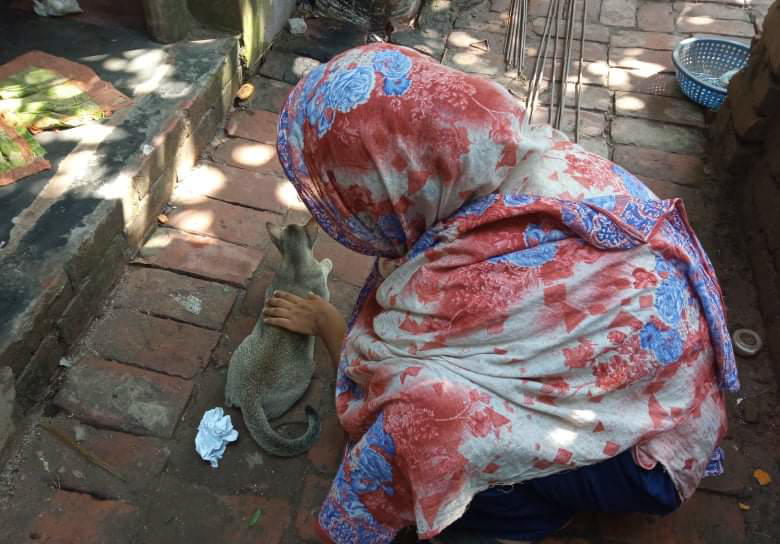 More garment workers in Bangladesh gave someone else a monetary gift last month than in any month prior, going back to May 2020. Workers were able to do this because the majority of them received their traditional bonus in observance of Eid al-Fitr.

That’s good news, and it’s the kind of data we like to see. Sometimes, pouring over the data as much as we do, looking for trends, correlations or signals, we skip a beat. That happened last month, as we accidentally reported inaccurate work hours for April 2021. We’ve now corrected that blog and the associated graphics, but we wanted to share our mistake publicly.

We always try to double or triple check our work, but sometimes we need help. If you ever see a data point that doesn’t look right, we encourage you to reach out to us at questions@workersdiaries.org. And now, let’s get an update from garment workers through the end of May 2021.

Note: Banner photo courtesy of a garment worker (and a cat) in Bangladesh; numbers in graphs may not sum to 100% due to rounding.

87% of respondents were employed in May 2021. The median monthly work hours fell considerably, to 214 (213 for women and 217 for men). However, the Eid al-Fitr holiday is almost certainly the reason for this drop in typical work hours.

Among the 13% of respondents who didn’t work at all during May, a plurality, 41%, said one of the reasons they didn’t go to their factory was because of another type of reason (meaning they hadn’t quit, weren’t on maternity leave, sick, laid off, etc.). These other reasons are almost certainly time taken off from work in observance of Eid al-Fitr.

Unlike like last month, when one respondent was home quarantining, no respondents reported that they’d had to quarantine in May.

In May, 60% of respondents reported to us that they’d received a bonus payment from their factory in observance of Eid al-Fitr, which fell on May 13th. The typical amount of these payments was Tk. 4,500: a considerable amount, equivalent to over 40% of a typical worker’s monthly salary. Over half (55%) received these payments in cash.

Digital salary payments continue to be a bit more common than cash salary payments, while cash continues to dominate all other types of financial transactions. In fact, the one other type of financial transaction which had been slightly more likely to be digital over the past year, the money transfer sent outside the household, was overtaken by cash transfers in May: 32% of transfers sent outside the house were digital, 54% were in cash and 14% were mixed.

However, the easy explanation for this is that many garment workers had gone back home to visit friends and family, making it simpler to just hand off a cash gift. All told, many more garment workers than usual, 43%, sent a money transfer to someone in their social network last month.

Food security rates improved ever so slightly in May 2021 compared to April. What is discouraging though is that even in a month when the majority of workers received a bonus payment from their factory representing just under half of their normal take-home pay, the food security rates did not budge more in the right direction. It is clear that not enough garment workers are earning enough money to call their wages livable.

Meanwhile, illness and injury rates were the same in May as in April, and almost everyone who was sick or injured was able to seek medical help.

The data are drawn from interviews with about 1,300 workers interviewed weekly from May 2020 to May 2021. The number of worker responses in a particular month vary depending on interview participation rates throughout the month, but were never below 1,206 during this period. These workers are employed in factories spread across the five main industrial areas of Bangladesh (Chittagong, Dhaka City, Gazipur, Narayanganj, and Savar). Just over three-quarters of the working respondents are women, roughly representative of workers in the sector as a whole.