A week and a half ago marked the observance of Eid al-Fitr in Bangladesh. Many garment workers would have remained at home in the ensuing days because their factories would have been closed. Any movement outside might have been risky anyways, as the Bangladeshi government had decided to extend its COVID-19 lockdown until at least May 23rd (and it appears that a slightly less stringent lockdown will remain in place until May 30th).

We’ve written before about how the biannual Eid cycle and what it means for garment workers has remained unbroken throughout the pandemic: workers receive a bonus payment from their factories and get to spend time at home or back in their villages, sharing what they have earned with family and friends.

As MFO and SANEM mark the thirteenth month of unbroken data collection in Bangladesh, we hope that garment workers will have found some relief this month in the predictability of tradition.

As for the data, here’s where the study has ended up through the end of April 2021… 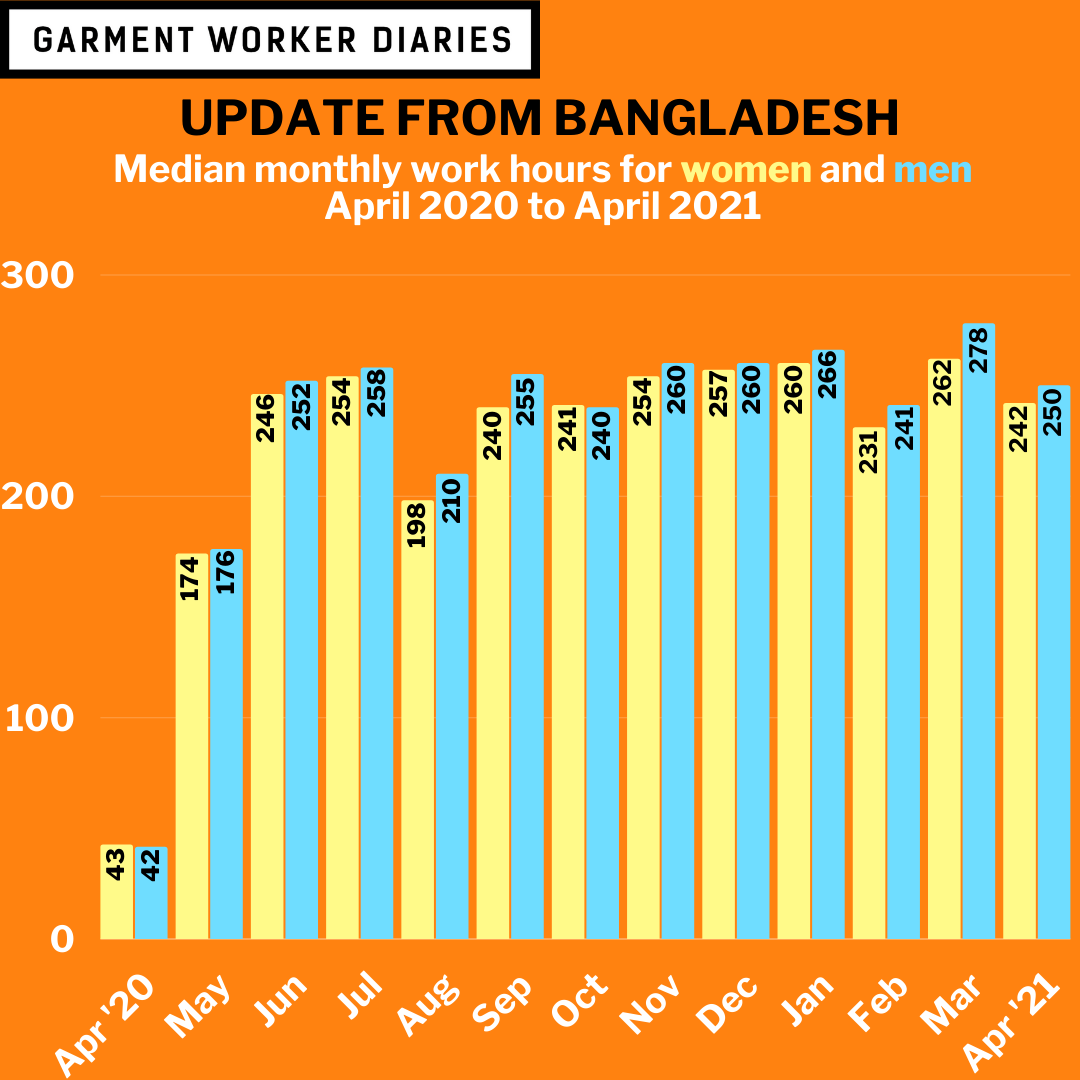 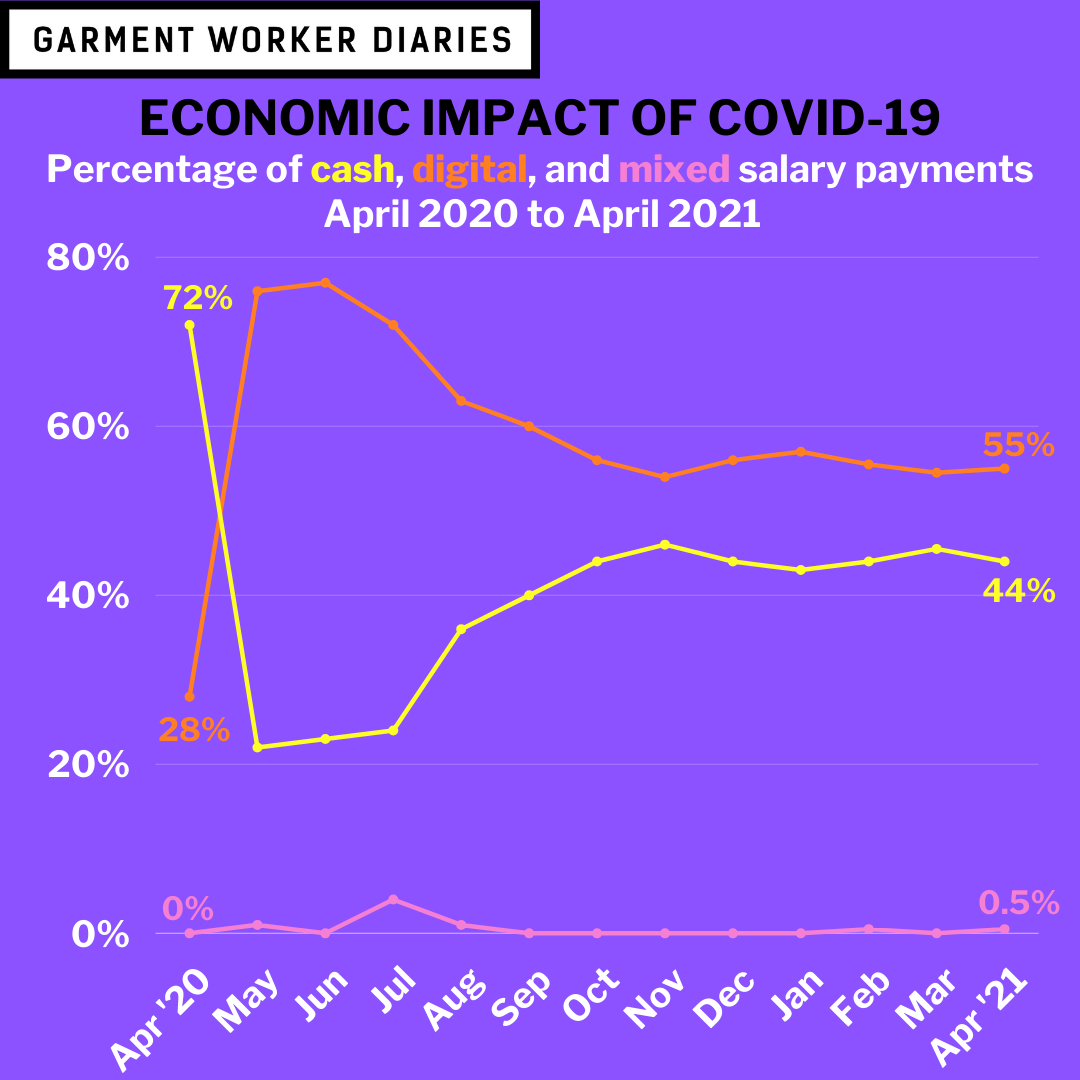 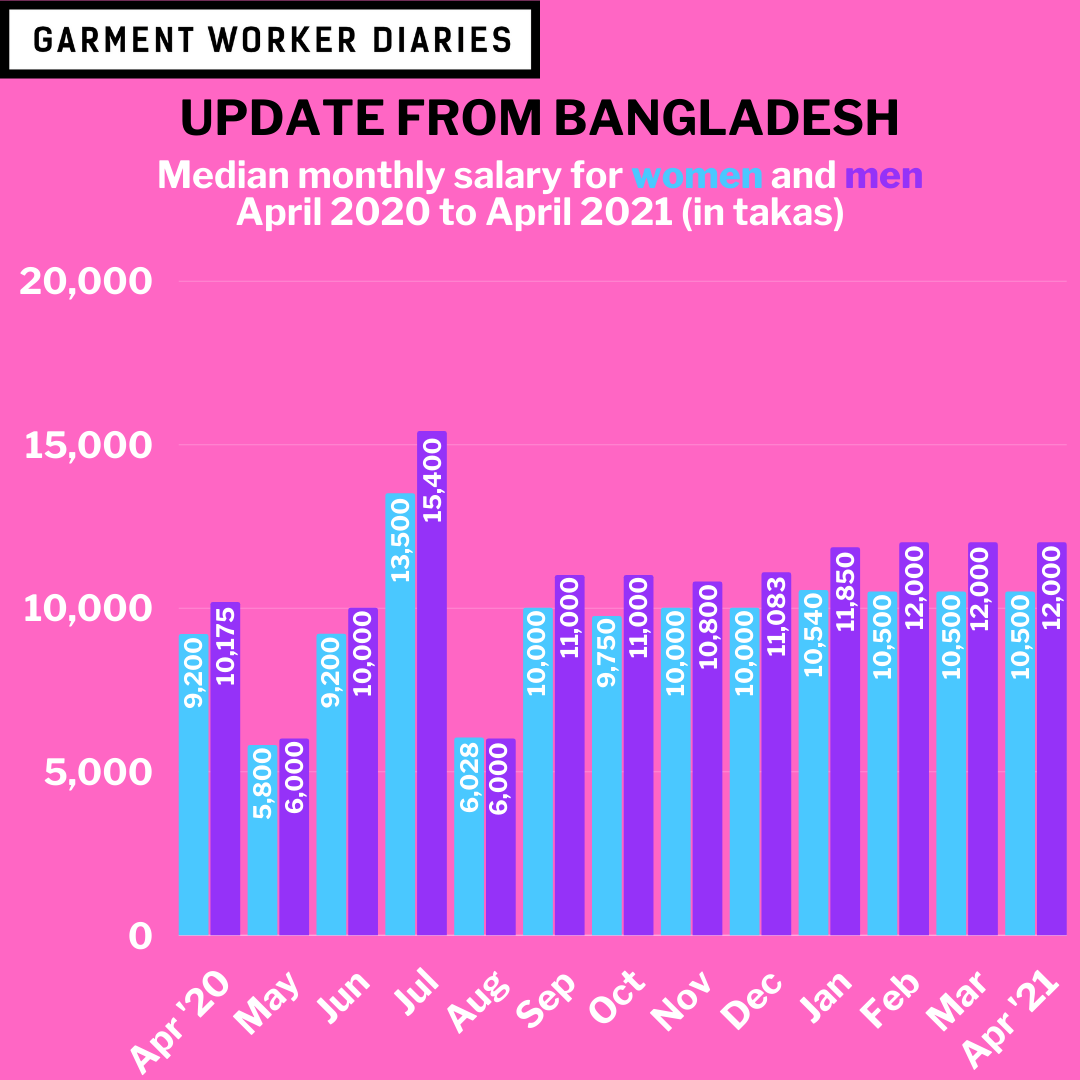 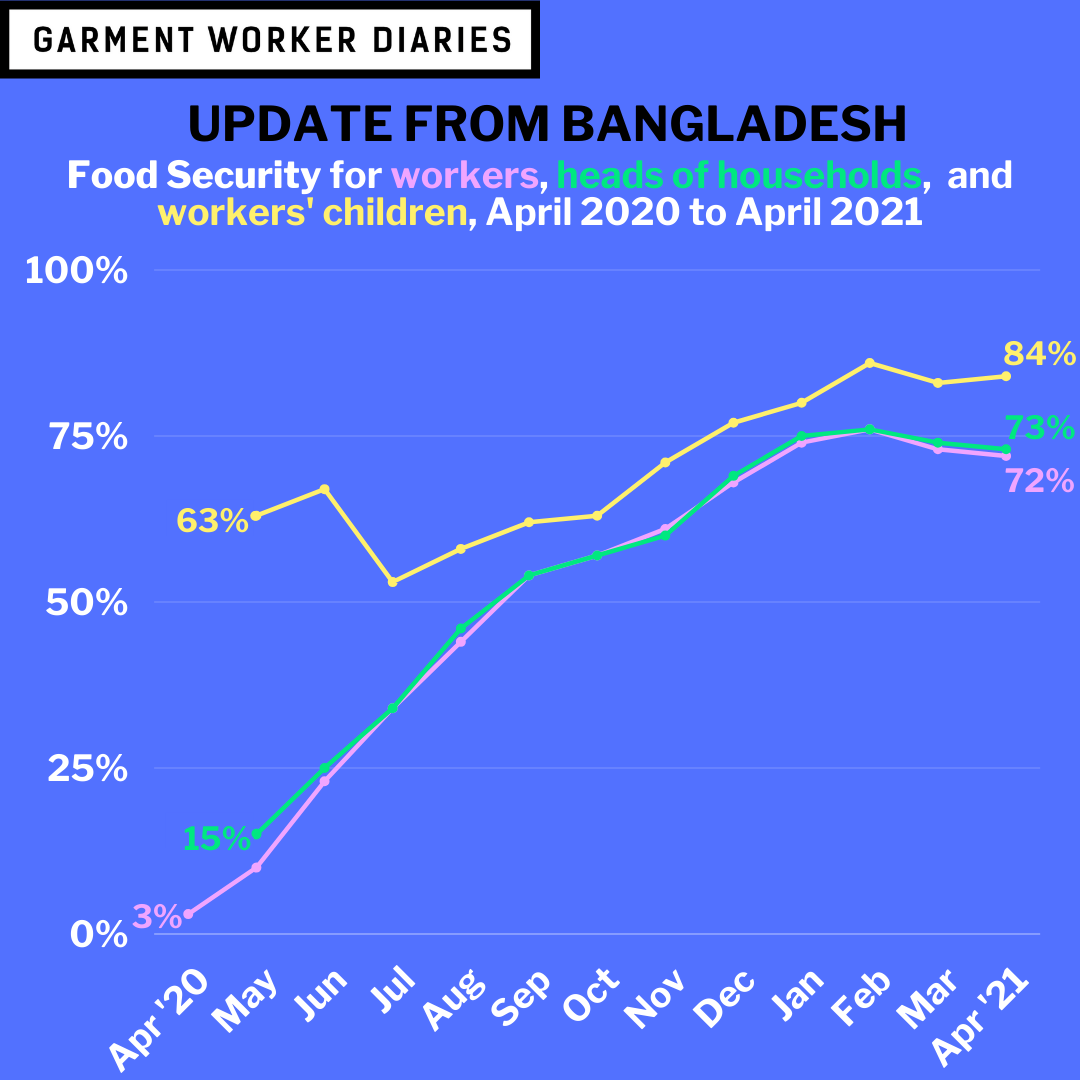 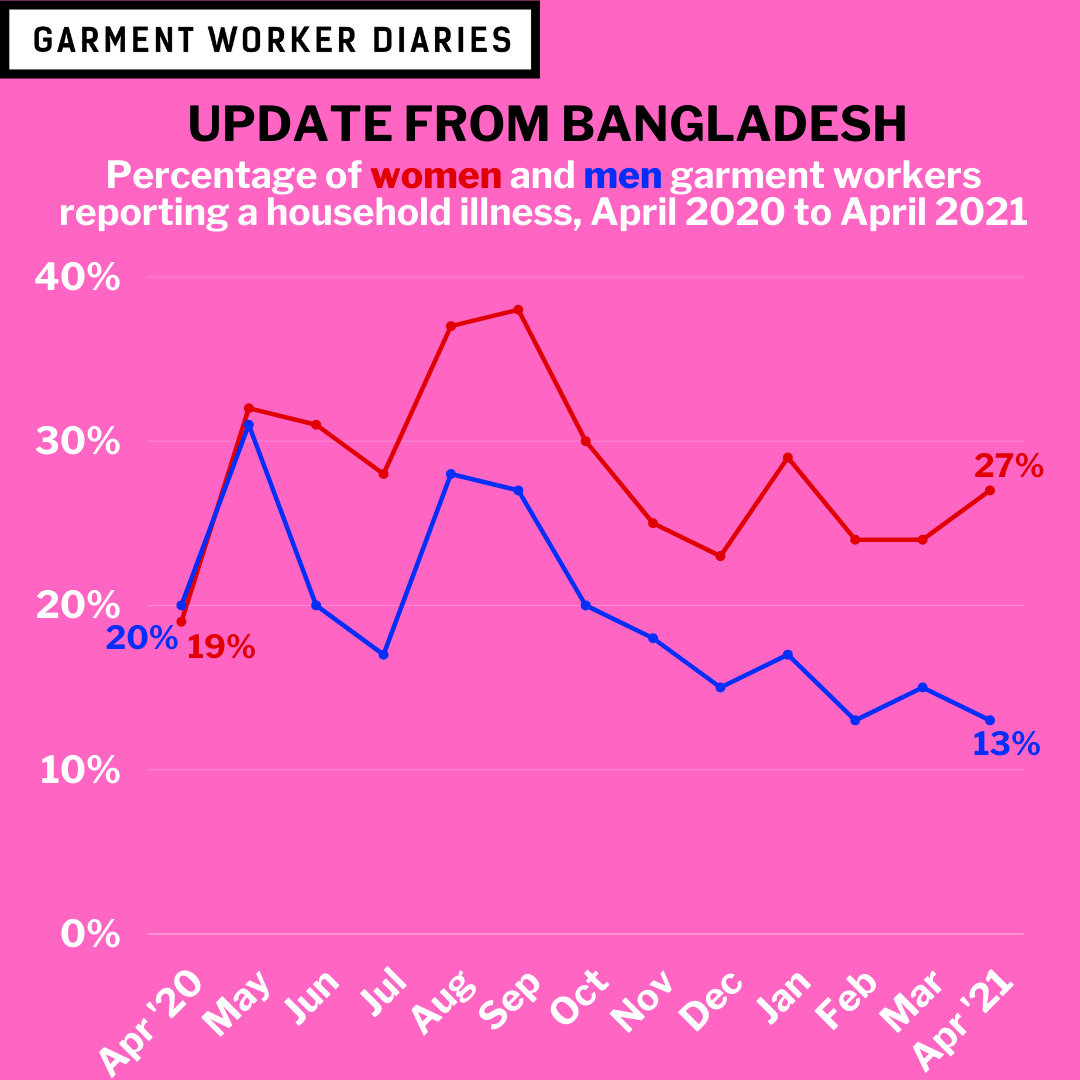 Note: We previously reported work hours for April 2021 incorrectly. The numbers reported were those for March 2021. We have updated the infographic above, as well as the text in the body below with the April 2021 data.

Of the unemployed respondents in the study, 55% said the reason they didn’t work in April 2021 was because they quit, a higher proportion than in any prior month. Other unemployment reasons were similar in April compared to past months, the exception being that one of our respondents said they were quarantining at home, and thus could not show up for work.

About 10% of respondents received additional income from their factory, a bit higher than normal. None of the respondents indicated that this was an Eid bonus, however, but we wouldn’t be expecting to see Eid bonuses until this month anyways. Once we finish analyzing data through the end of May, we might find out that some of these additional factory payments in April were actually premature Eid bonuses. If they weren’t, we might need to investigate further.

The frequency of other financial transactions and the amounts transacted remained similar to prior months. It might be worth noting that the median rent amount has crept up from Tk. 3,000 one year ago to Tk. 3,300 in April 2021. About two out of every three garment workers continue to make a rent payment each month.

The data are drawn from interviews with about 1,300 workers interviewed weekly from April 2020 to April 2021. The number of worker responses in a particular month vary depending on interview participation rates throughout the month, but were never below 1,206 during this period. These workers are employed in factories spread across the five main industrial areas of Bangladesh (Chittagong, Dhaka City, Gazipur, Narayanganj, and Savar). Just over three-quarters of the working respondents are women, roughly representative of workers in the sector as a whole.