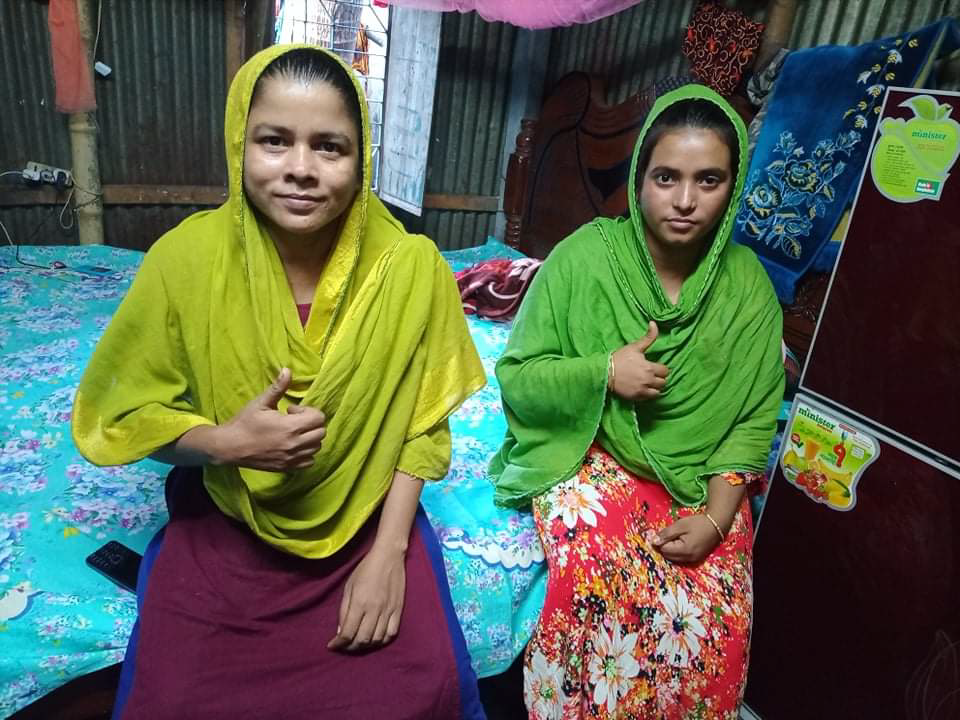 From time to time we have asked garment workers in Bangladesh specific details about their savings practices, beyond just whether they save and how much they deposited (whether at home or in a formal institution). Our savings questions have been asked within the context of the household, as many garment workers are not the only earner living at home and many of them pool their incomes together. Starting in November 2021 we decided to make savings questions a more regular feature in our surveys, and we’ve now been asking garment workers each month a set of questions designed to help us understand not only how much workers are savings but why they are saving and when they plan to spend their savings. We’ll also still be asking who exactly determines how such savings will be spent. Presented here are the results from our first three survey months, covering any savings workers accumulated in October, November and December 2021. 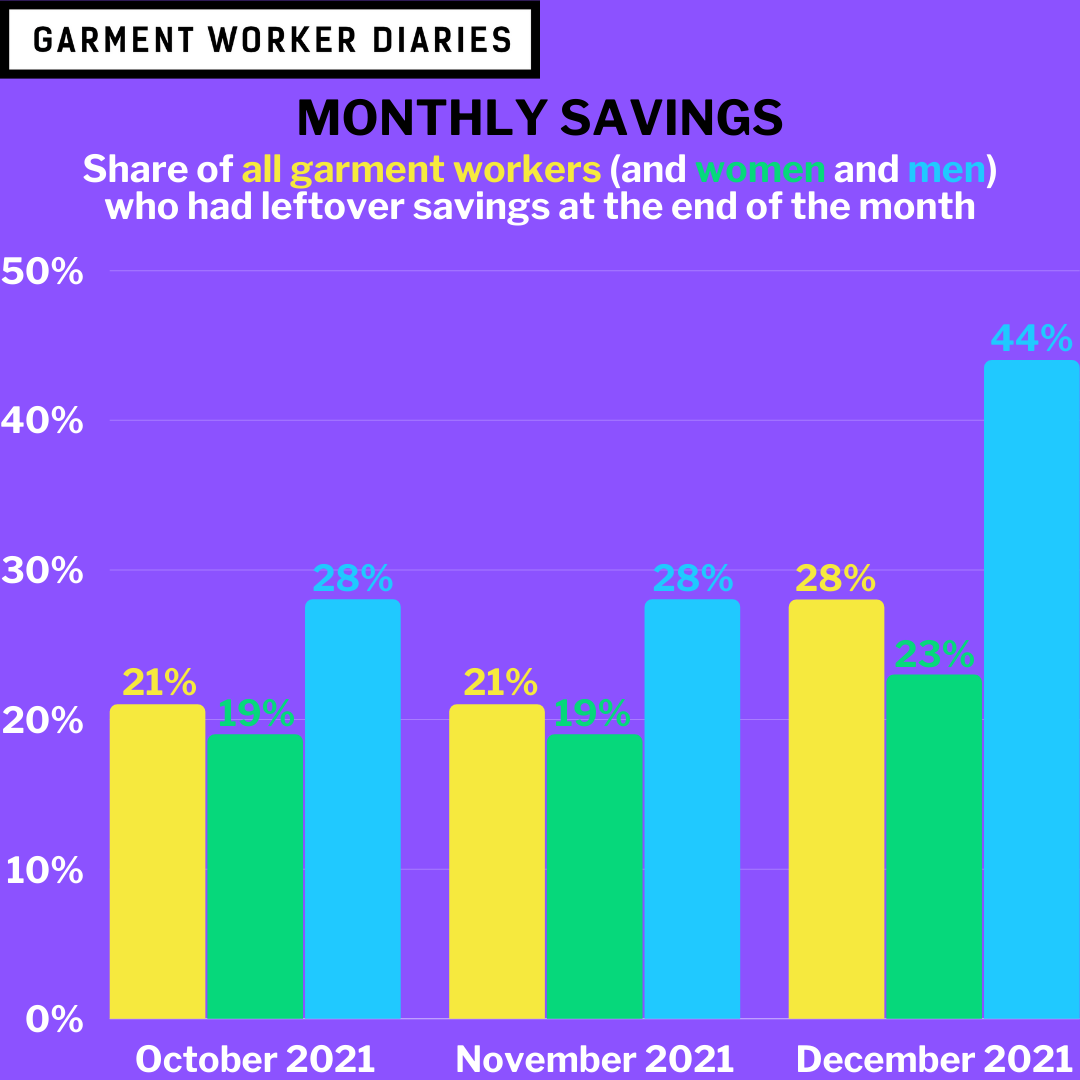 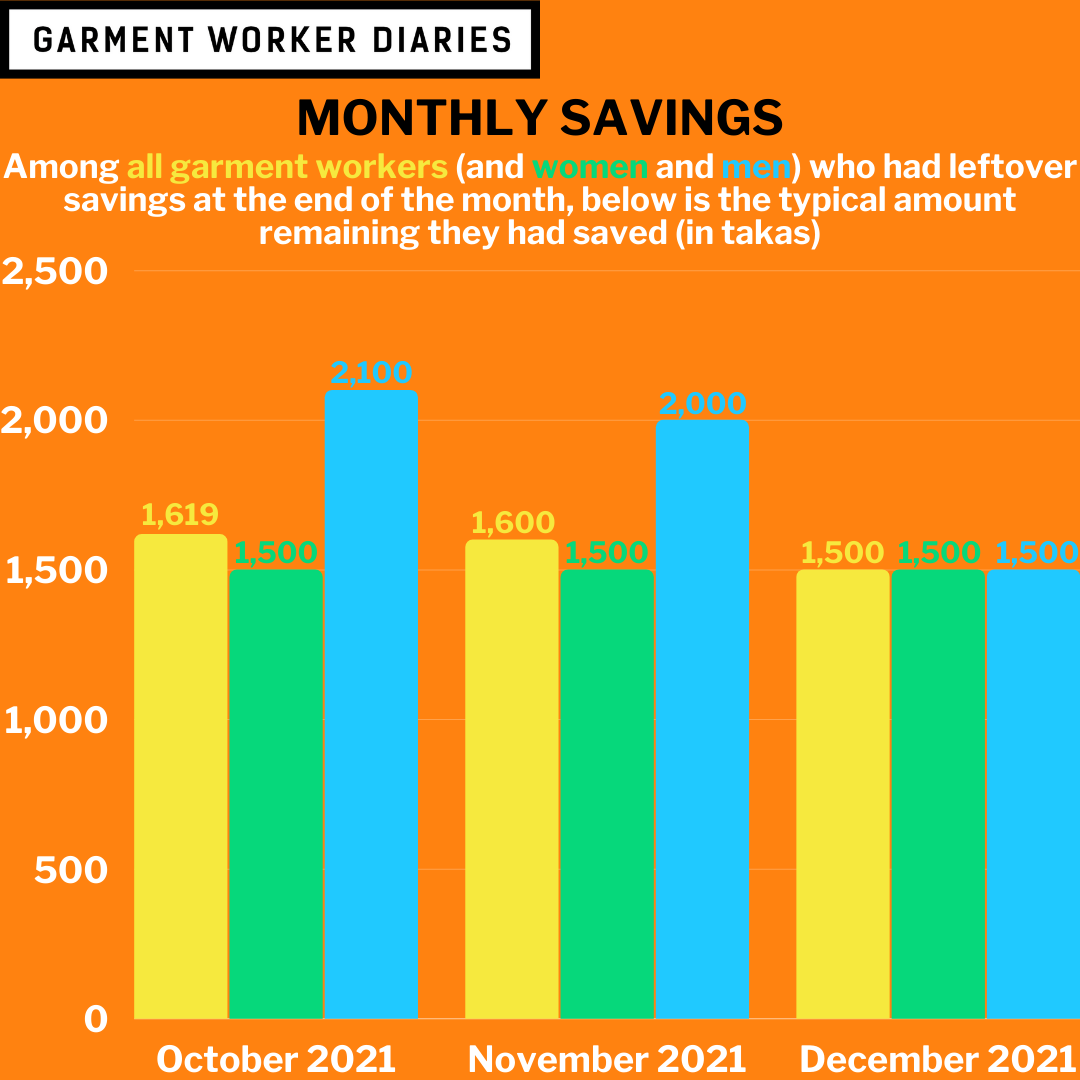 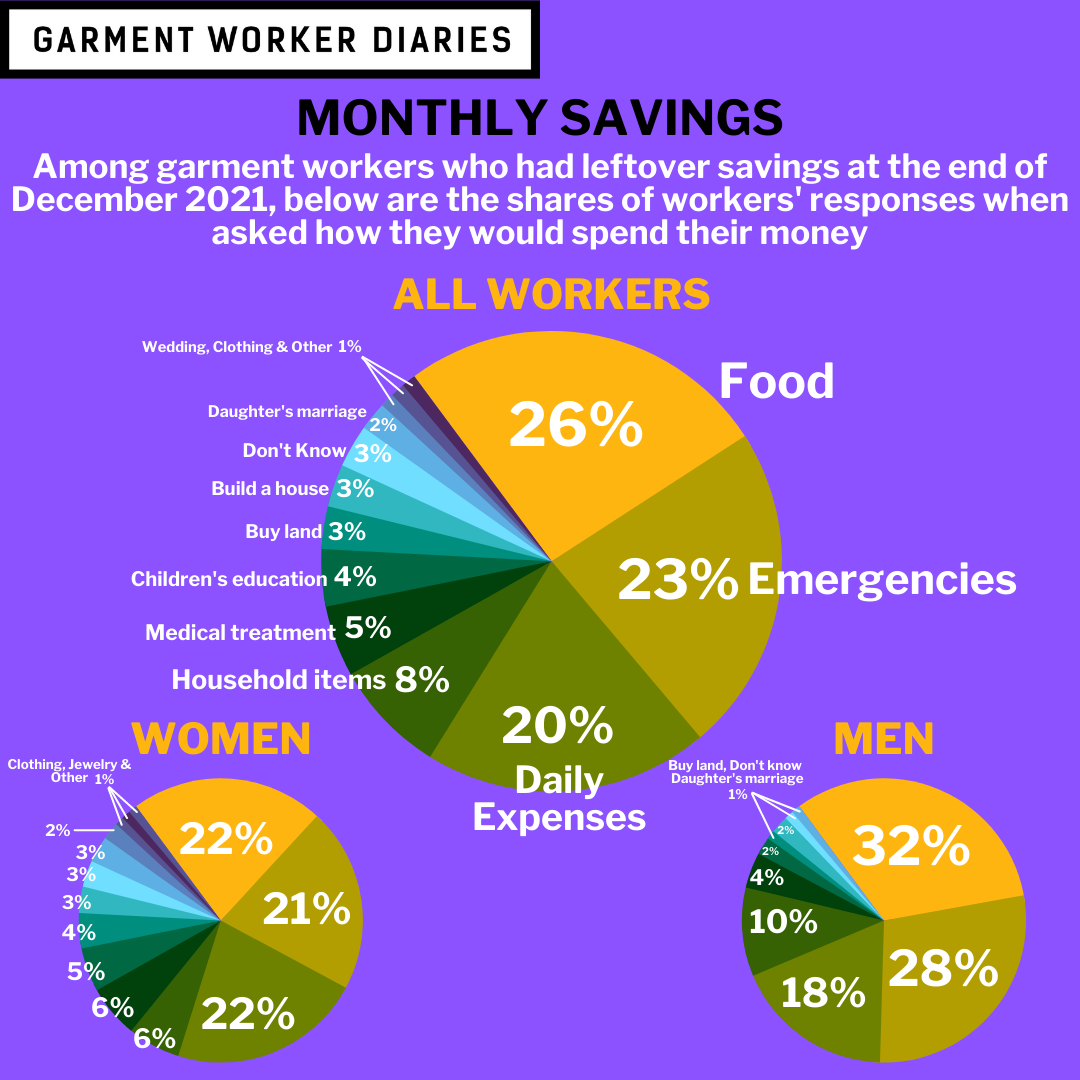 To best design this new set of savings questions to map to what matters to garment workers in Bangladesh, we presented questions related to October savings as open-ended questions. This means respondents could answer the questions any way they saw fit. We then took those answers they gave us and made them multiple choice options for the November and December surveys.

Before we asked respondents to tell us exactly how much money they had left over each month, we asked them if they were comfortable sharing that information with us. Among respondents who were comfortable sharing their savings amounts with us (women were somewhat more comfortable sharing details of their savings with us than men were), we found that the typical amount saved by women was somewhat less than men. However, the vast majority of all respondents (close to 90% in all three months) typically had leftover savings of an amount below 5,000 takas (equivalent to about USD $57 as of this writing). Below is a table showing the typical amount of leftover savings for all workers, women, and men at the end of each month, in takas:

We next asked workers how they planned to spend the money that remained from the previous month. The top three planned uses for the money in all three months was for food, emergencies, and daily expenses, in that order. Some respondents, but not very many, told us that they would put their savings towards long-term investments or expenses, such as their children’s education, marriage or weddings, and land or home construction. Below is a table showing the proportionate share of responses for how workers planned to put their leftover savings to use:

Then we asked respondents when they planned to spend this money. In both November and December, over half of all respondents told us they were planning to spend their savings within the near future, meaning either that week, that month, or the following month (in October, this percentage was somewhat lower, 33%, but that is because the respondents’ range of answers was much more varied and difficult to categorize temporally; in November and December, we pared back the number of available responses). Just under one-fifth of respondents were content to save their leftover money until “whenever it was needed”, and a slightly smaller share than this told us they were saving the money for emergencies.

Finally, we asked respondents to tell us who had control over how the remaining money was spent. Over four-fifths of respondents in all three months told us that they alone had control over how the savings would be spent. There was not much of a difference between women and men when it came to control over their money. Among those who did share control of the spending decisions with someone else, that person was almost always their spouse (and if not their spouse then their parents and then their children, in that order).