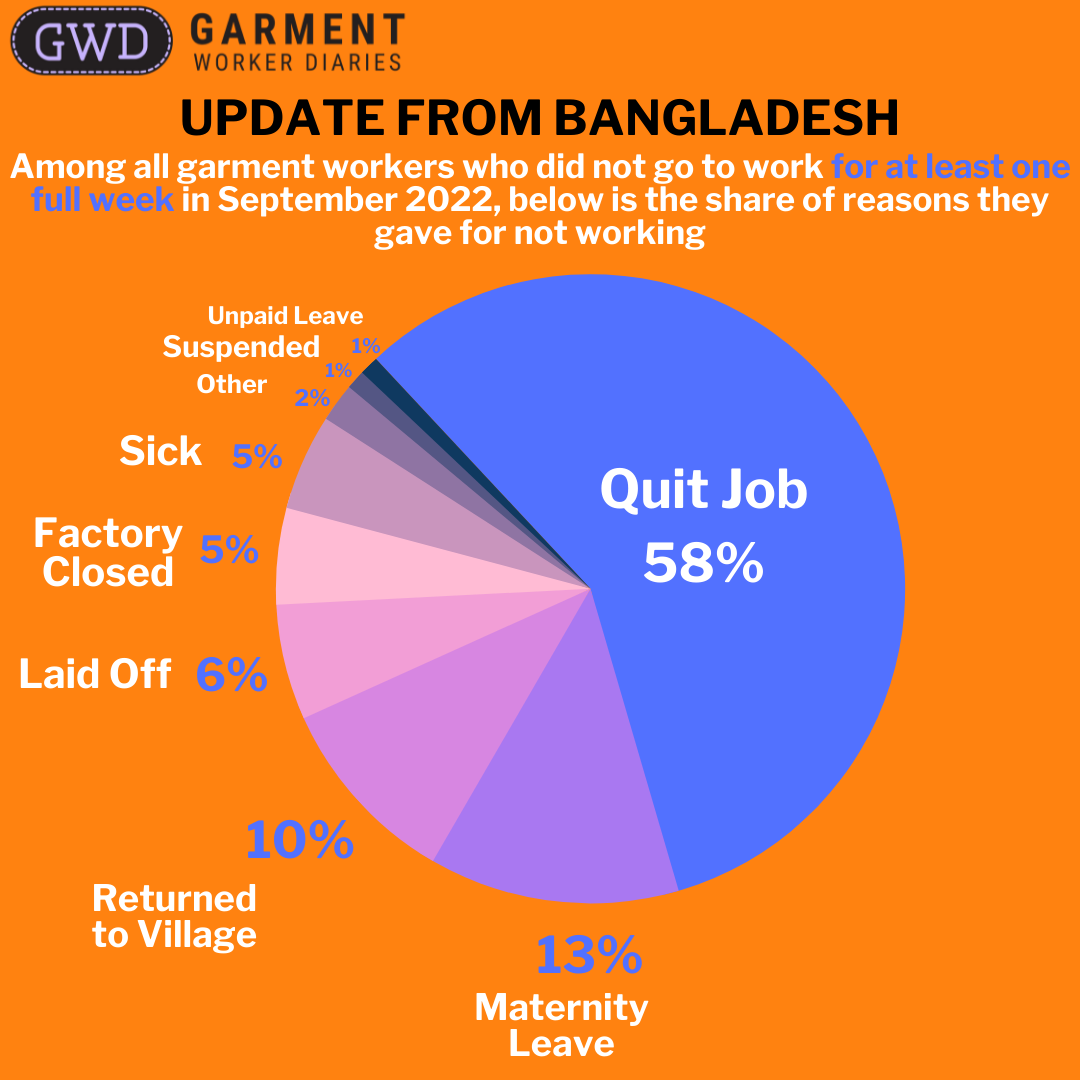 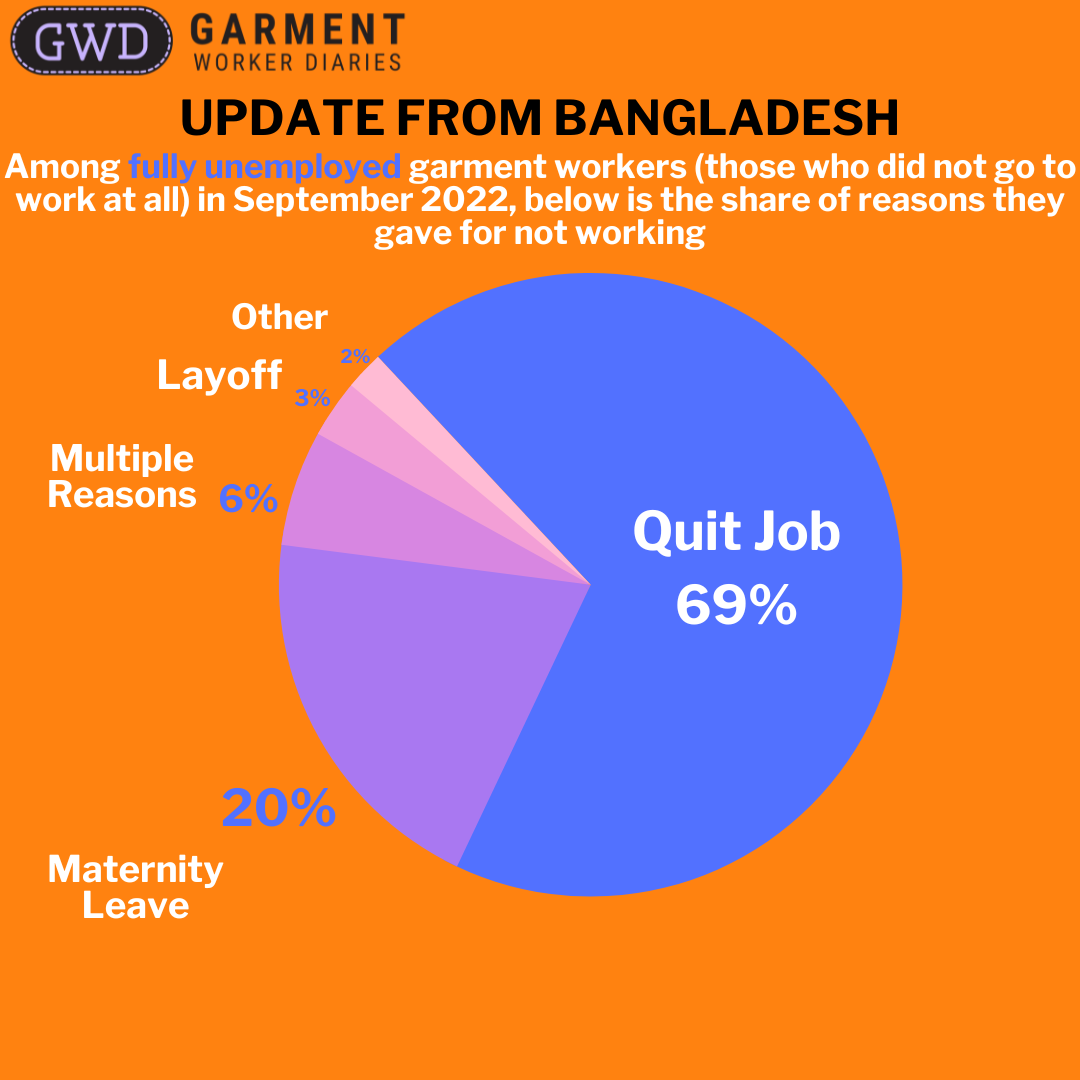 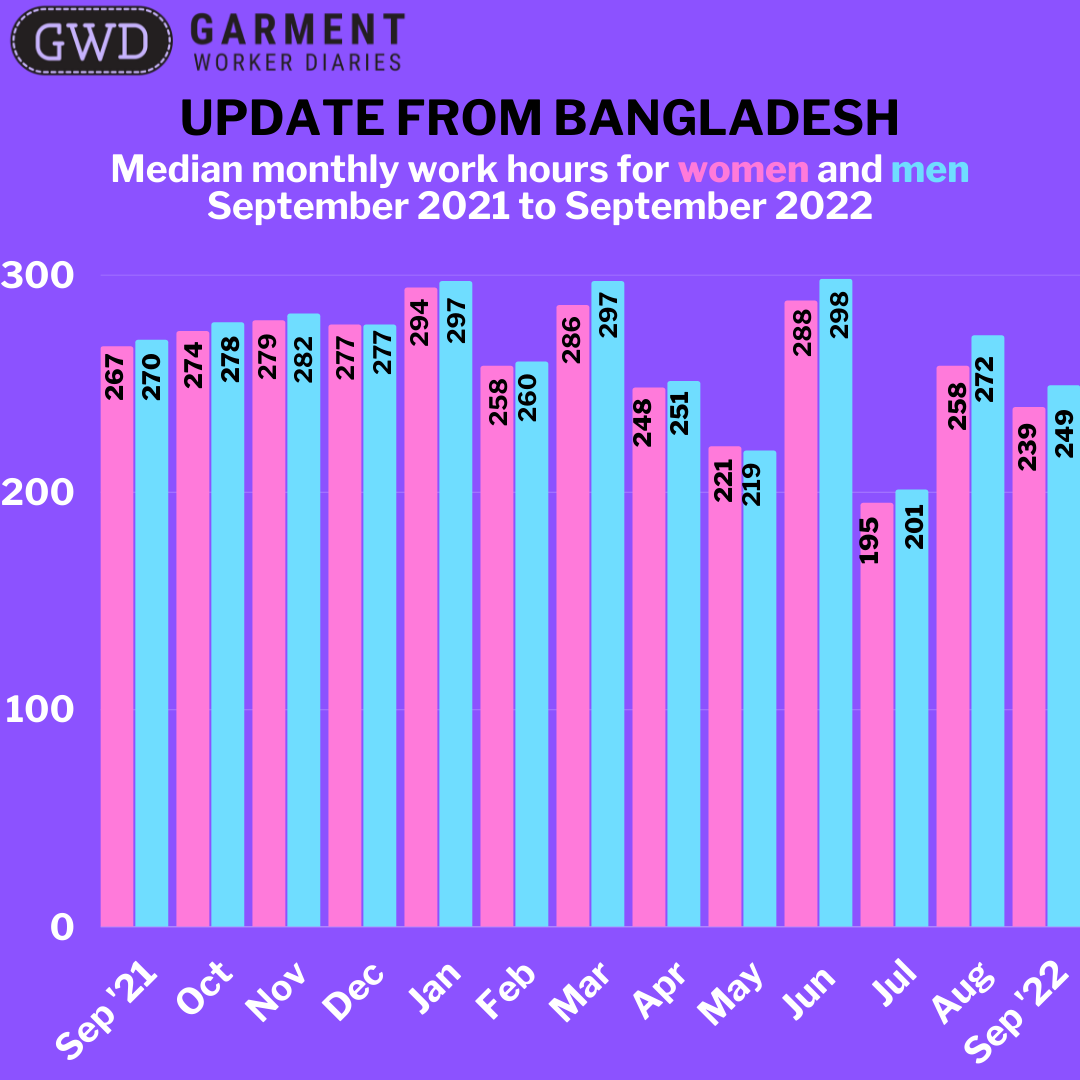 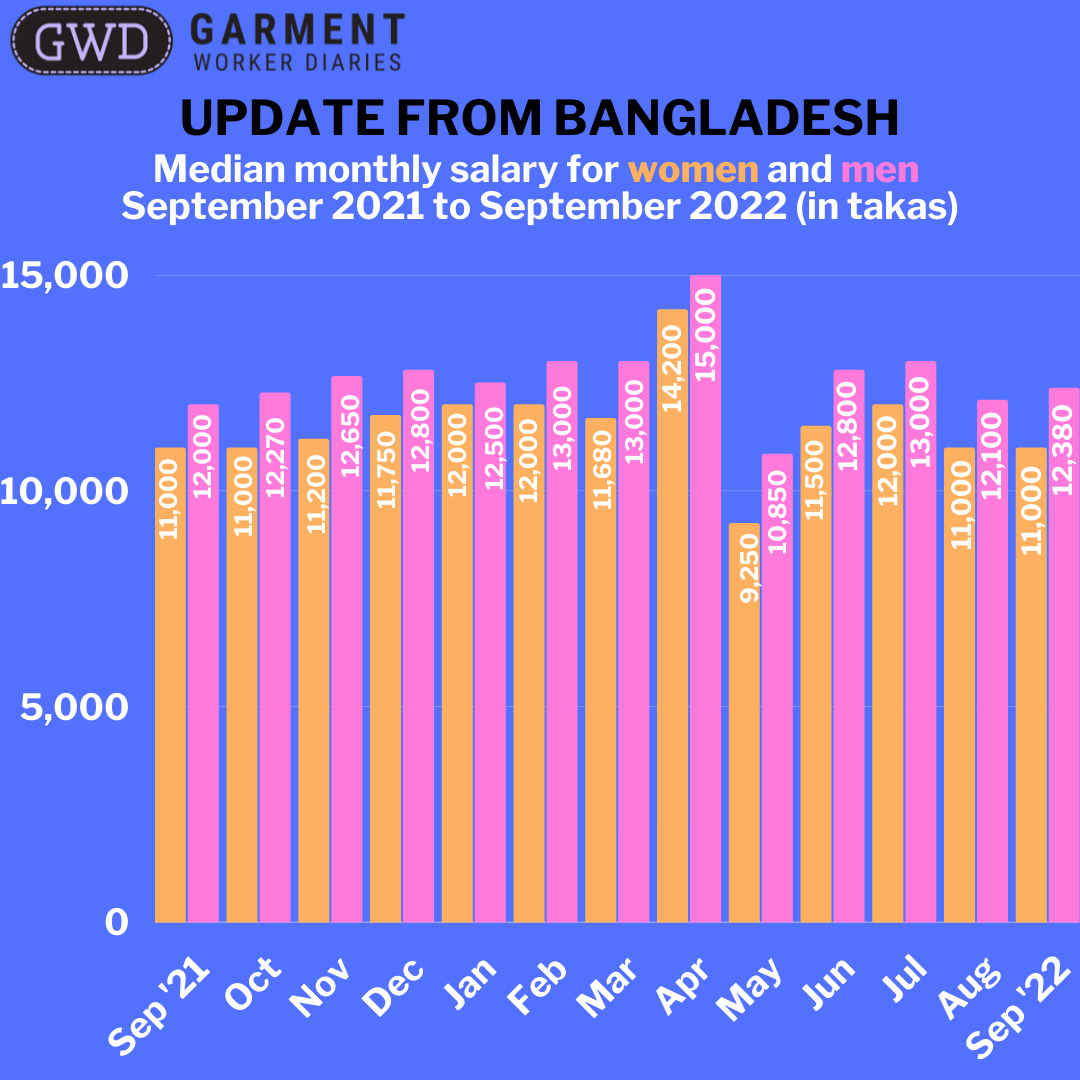 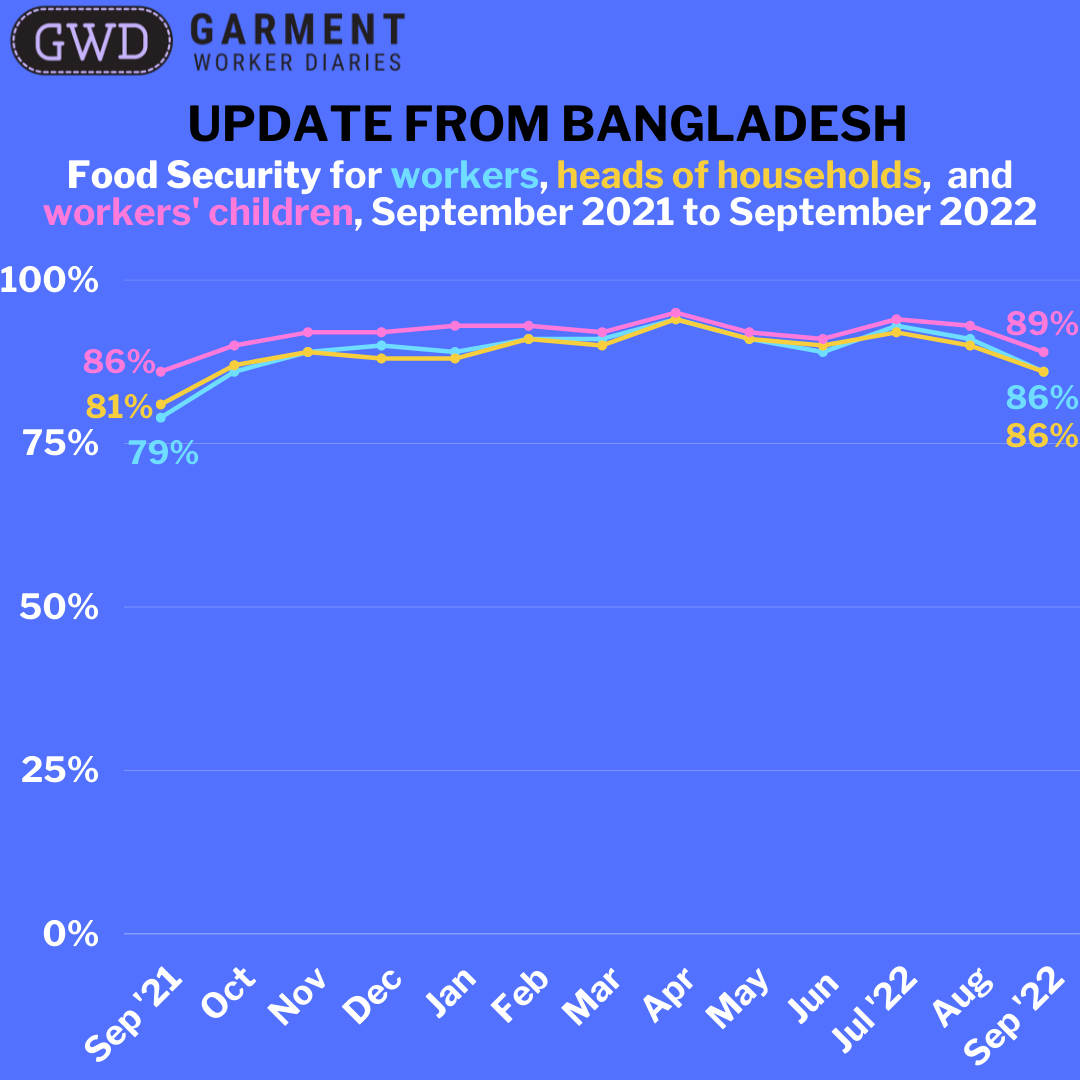 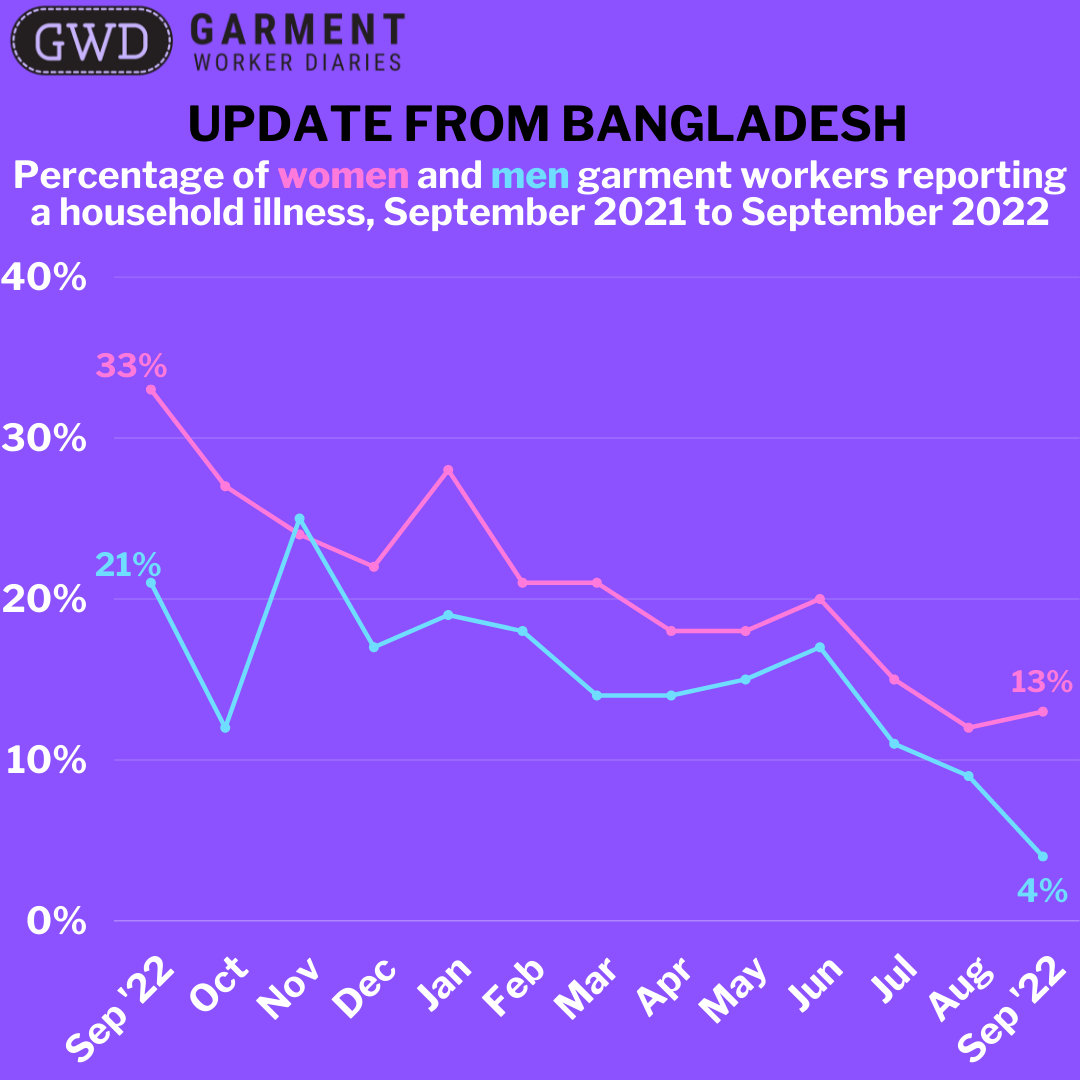 93% of all garment workers went to work at some point in September 2022 – this is the highest share of workers recorded during the study so far. The reason for this is that by the end of August 2022 we dropped workers who had been unemployed for over three months. The share of women who went to work was 91% compared to 97% for men. The median work hours reported in September 2022 was 243 (239 for women and 249 for men) which was slightly lower than the 260 reported in August 2022 and higher than the 197 reported in July 2022. The low work hours in July 2022 were expected as workers took a break to celebrate Eid-al-Adha. Women and men worked a similar number of hours over the past three months, but as usual men worked a few more hours than women.

Among respondents who did go to work in September but also missed at least one full week of work or more, 58% of respondents reported that they had quit working at their factory, which is a lower share than what was reported in previous months (70% in August and 66% in July). Again, this is because the majority of the workers in the study are now employed, after having dropped workers from the study who had been unemployed for more than three months.  Other reasons for not working a full week included maternity leave (13%), being in the village (10%) and being laid off (6%).

Among respondents who were completely unemployed (meaning they did not go to work at all during September), the share of respondents who reported “quit” as the reason for not going to work was 69%, lower than what has been reported in the previous months.

The share of respondents who received Eid bonus payments for July 2022 was about 64% (about 47% of women and 17% of men). 49% of these bonuses were paid digitally and another 49% in cash, with the remaining 2% of bonuses being mixed payments.

The share of respondents who transferred money to someone outside of their household was 17% which was slightly higher than 15% reported in August but lower than 26% reported in July. The typical amount given was Tk. 2,500 which is in line with Tk. 3,000 reported in August 2022. More than half, 64%, of the transactions were transferred digitally, while 21% were in cash and 3% were mixed (cash and digital), with the remaining 12% being a combination of digital transfers mixed with in-kind gifts, cash transfers with gifts, or pure gifts. Unlike the previous month but in line with May 2022, cash transfers were dominant in July 2022, and this could be attributed to the fact that workers were physically present with their families because of the Eid break.

The share of workers making a monthly rent payment was slightly higher in September than in previous months, as 71% of the respondents reported making a rent payment (68% of women and 79% of men) compared to 60% and 67% in July and August, respectively. The typical rent payment amount also remained the same over these three months, at Tk. 3,500.

Food insecurity rates have been on the rise since July: 14% of respondents (double the 7% in July), 14% of heads of households, and 11% of worker’s children experienced at least one week of food insecurity during September.

The data are drawn from interviews with 1,300 workers interviewed weekly in July and August 2022 and 1,000 workers interviewed in September 2022. The number of worker responses in a particular month varies depending on interview participation rates throughout the month. These workers are employed in factories spread across the five main industrial areas of Bangladesh (Chittagong, Dhaka City, Gazipur, Narayanganj, and Savar). Just over three-quarters of the working respondents are women, roughly representative of workers in the sector as a whole.