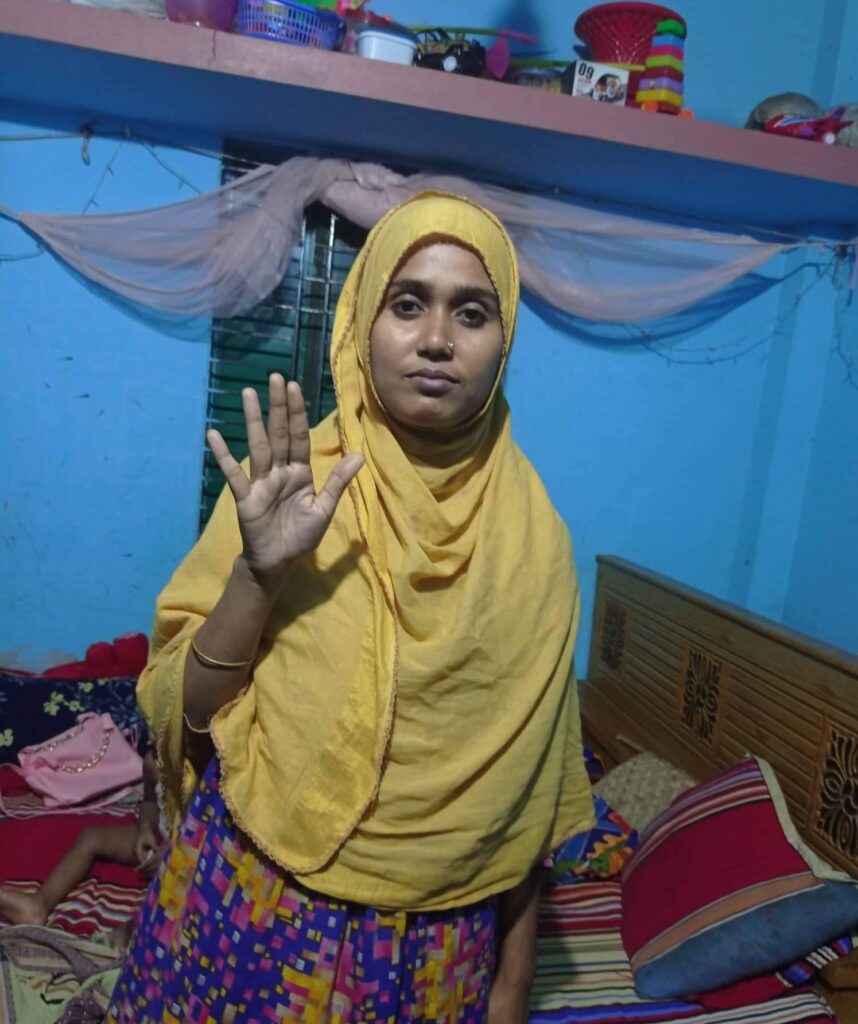 May 2022 saw many garment workers in Bangladesh getting a brief respite from the historically high hours of work they have been putting in at their factories, as many took leave to celebrate Eid al-Fitr at the beginning of the month. Coming into May, many workers were also already riding a crest of extra cash supplied by advance salary payments April, but which in turn meant lower salary payments in May. Let’s see how they managed their finances that month, and how these varying waves of income might have affected their lives. 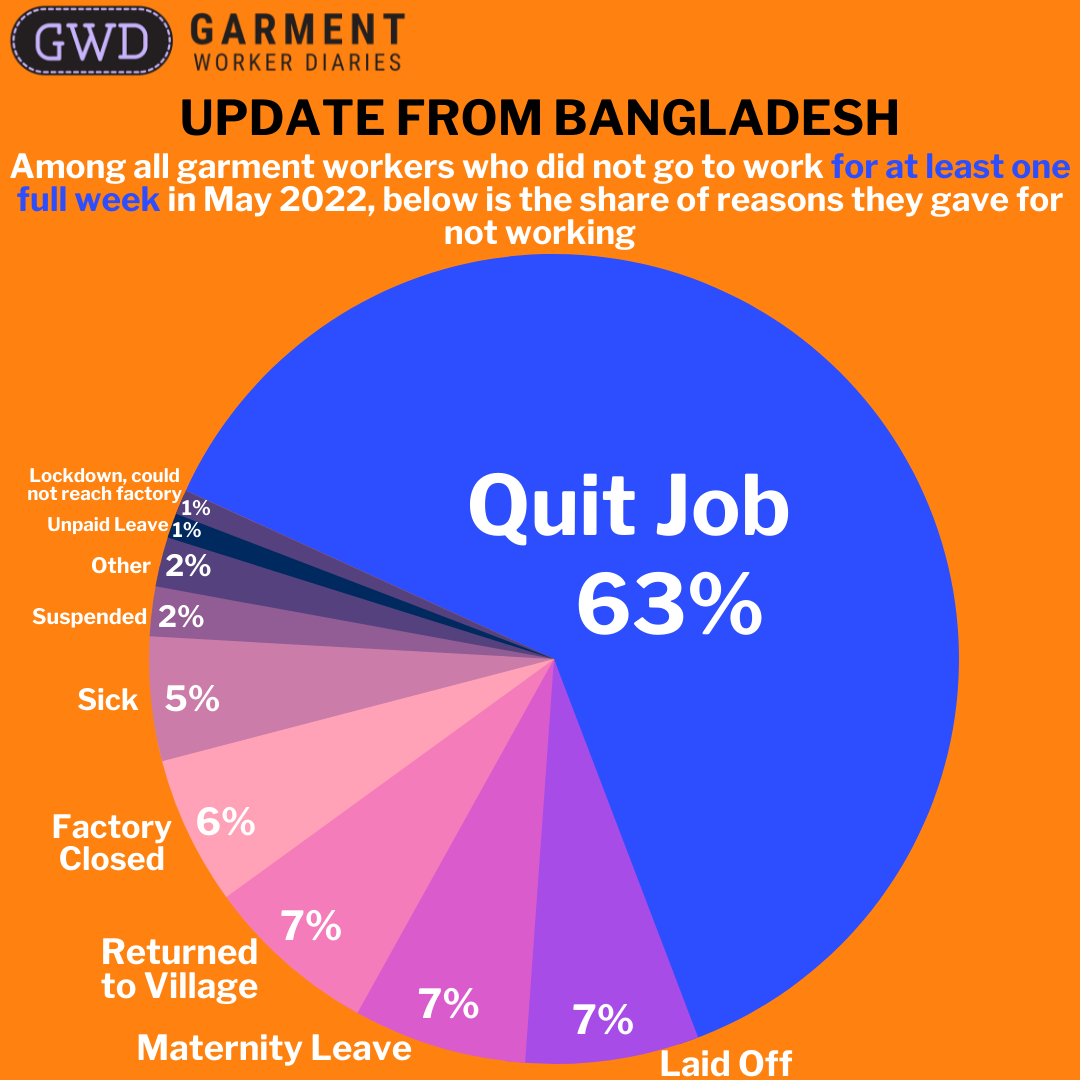 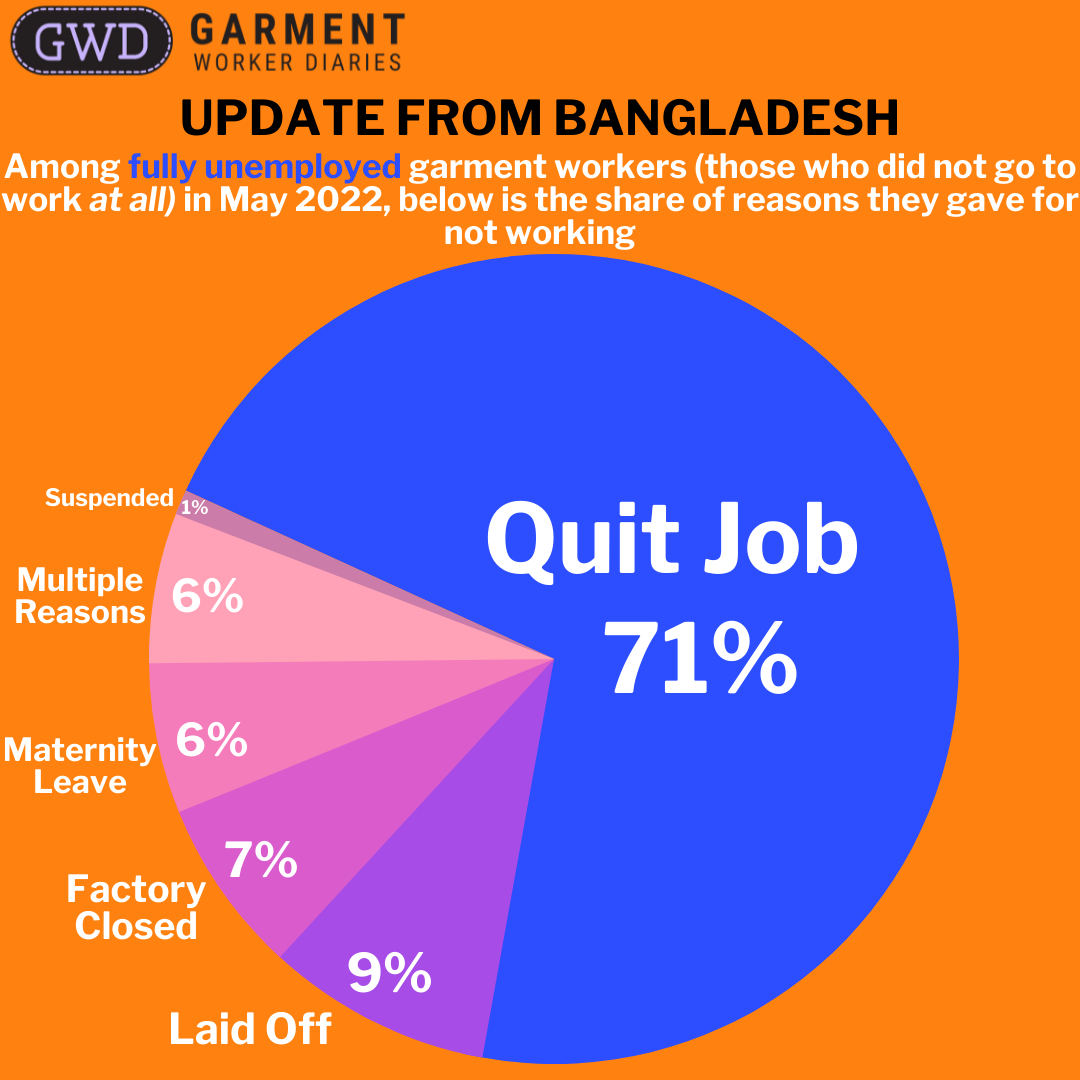 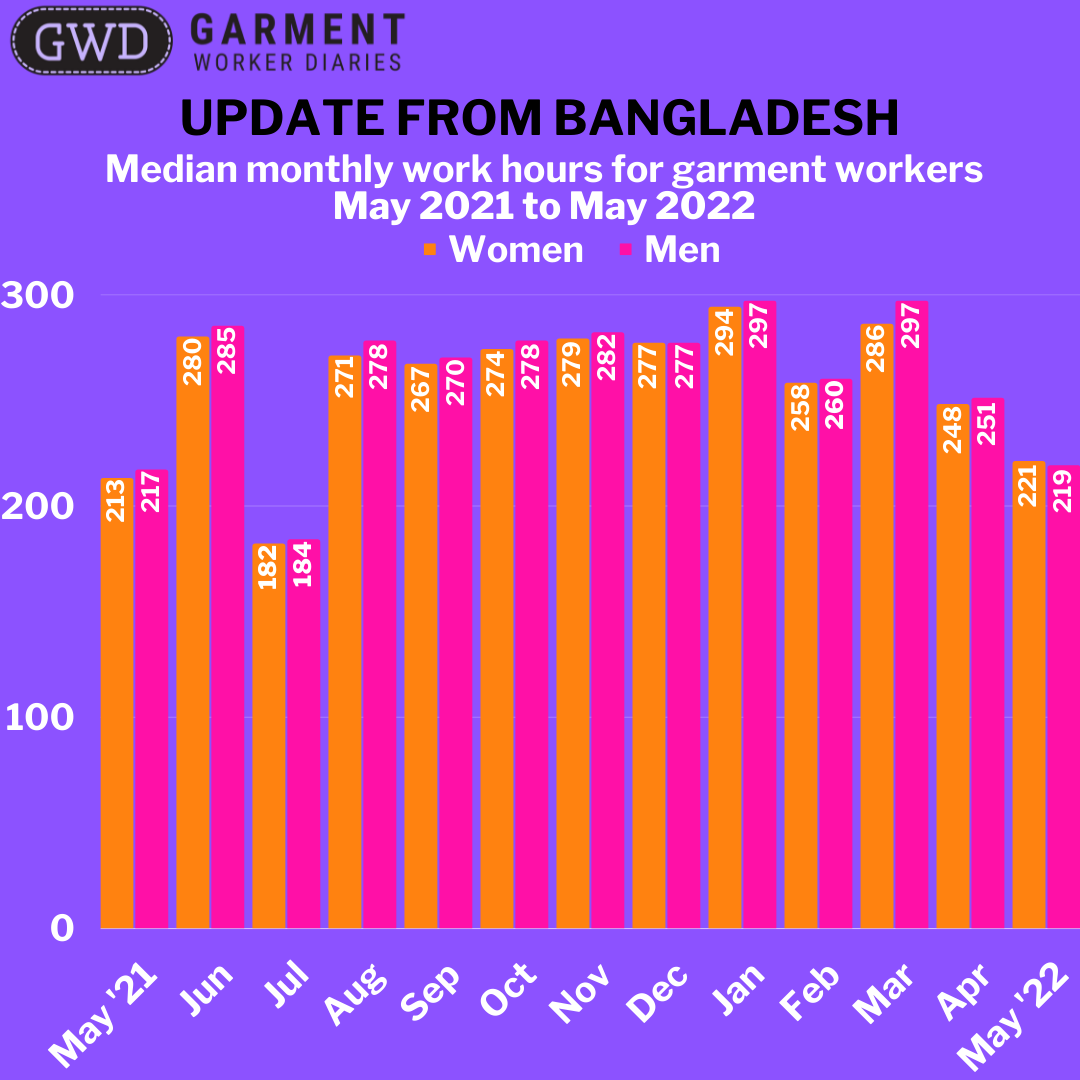 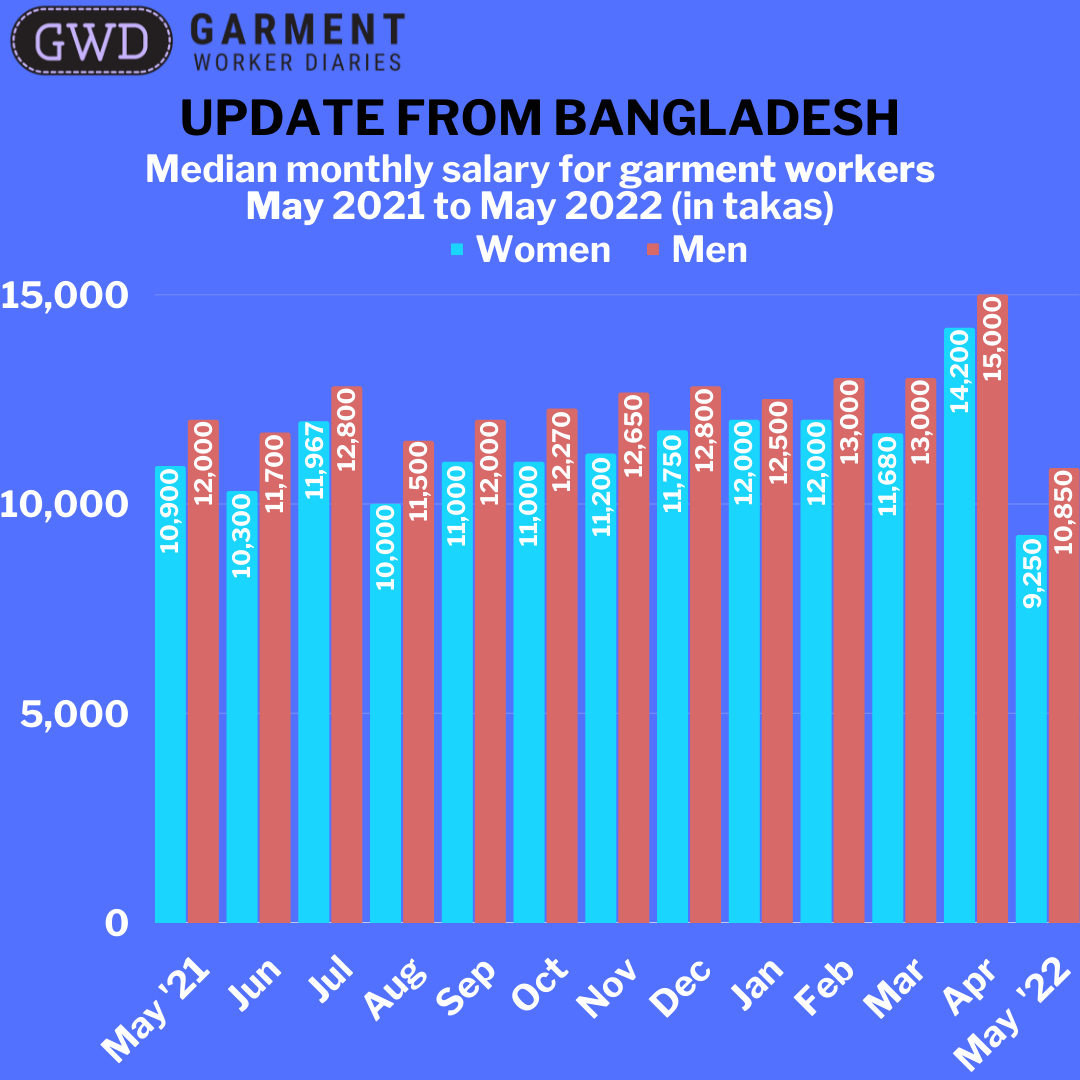 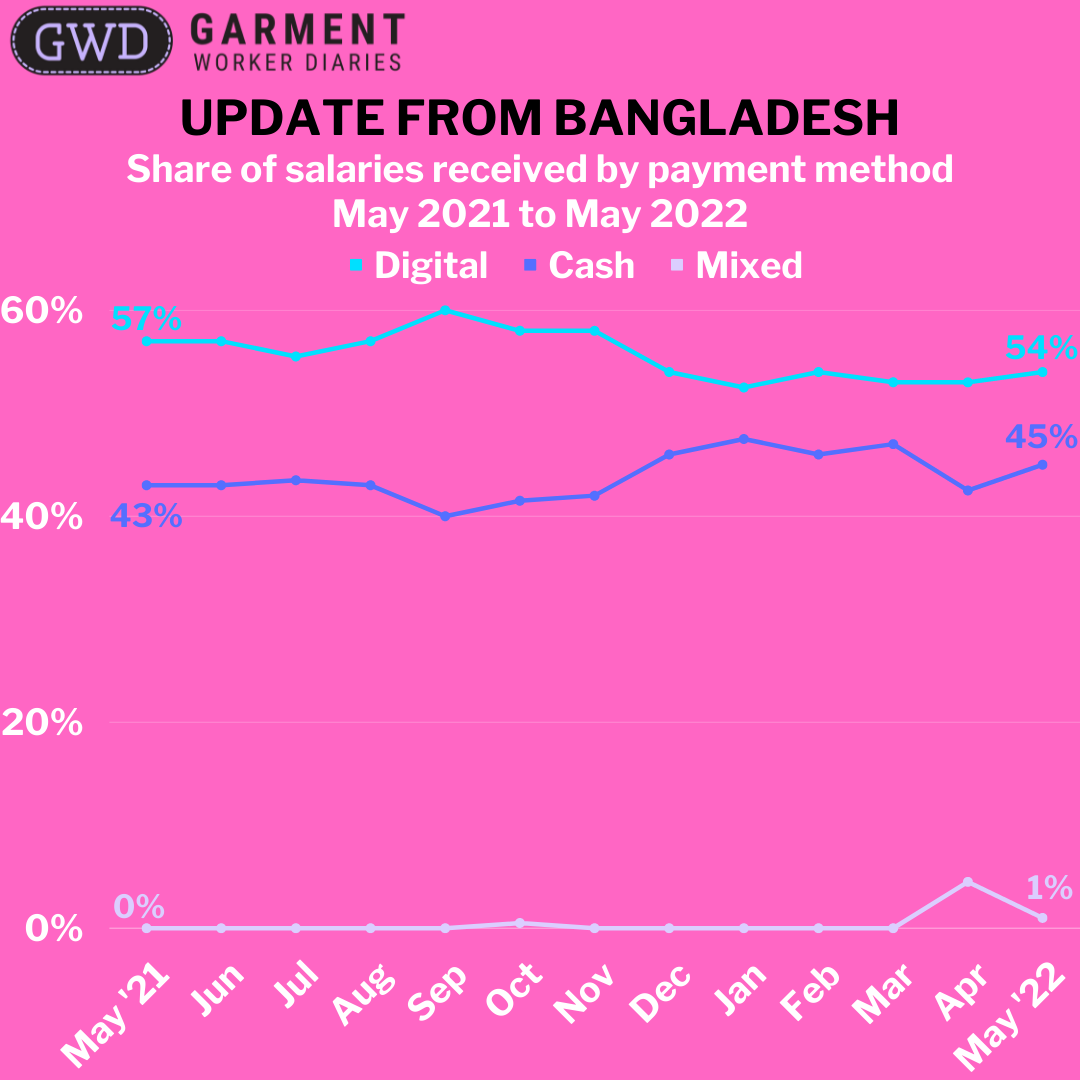 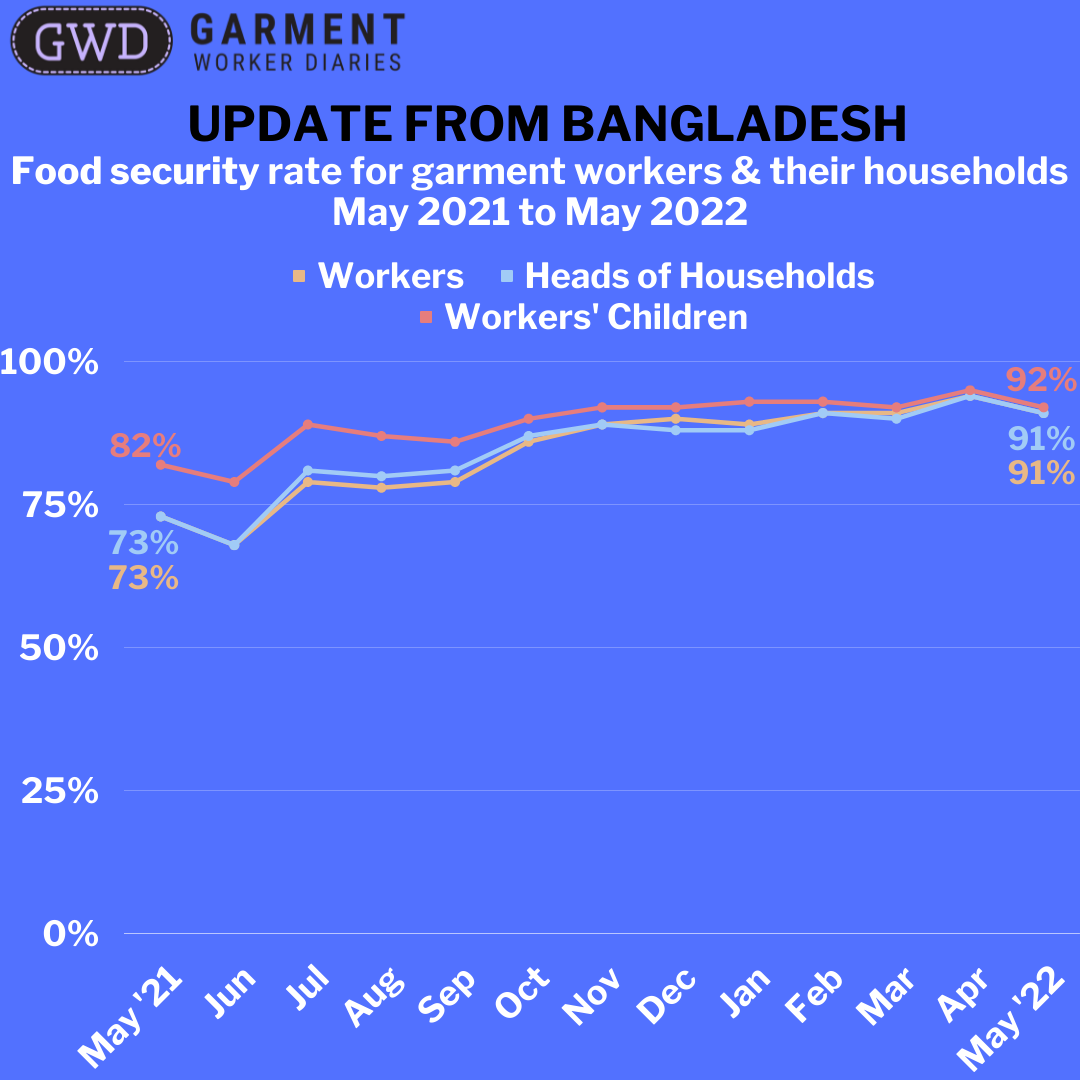 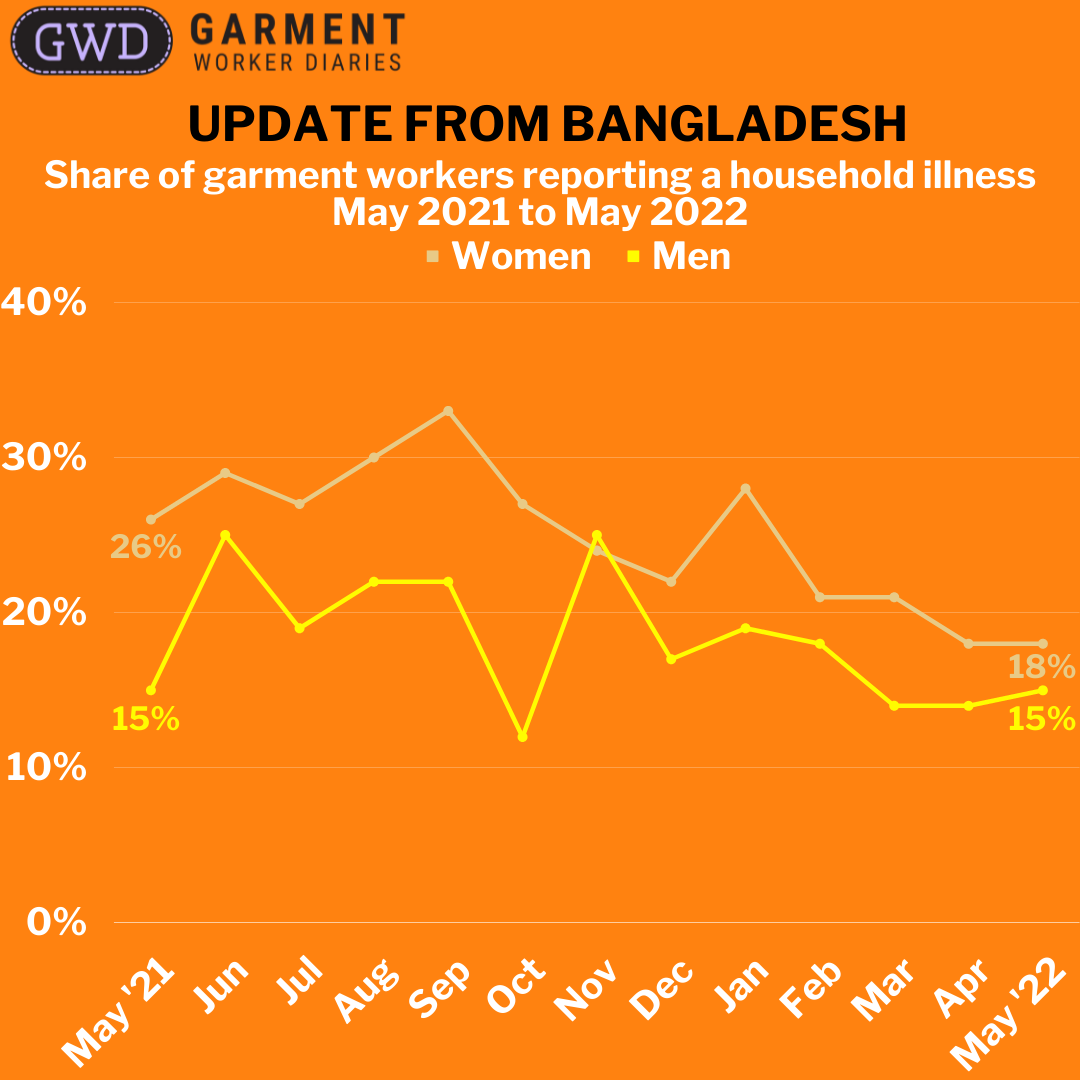 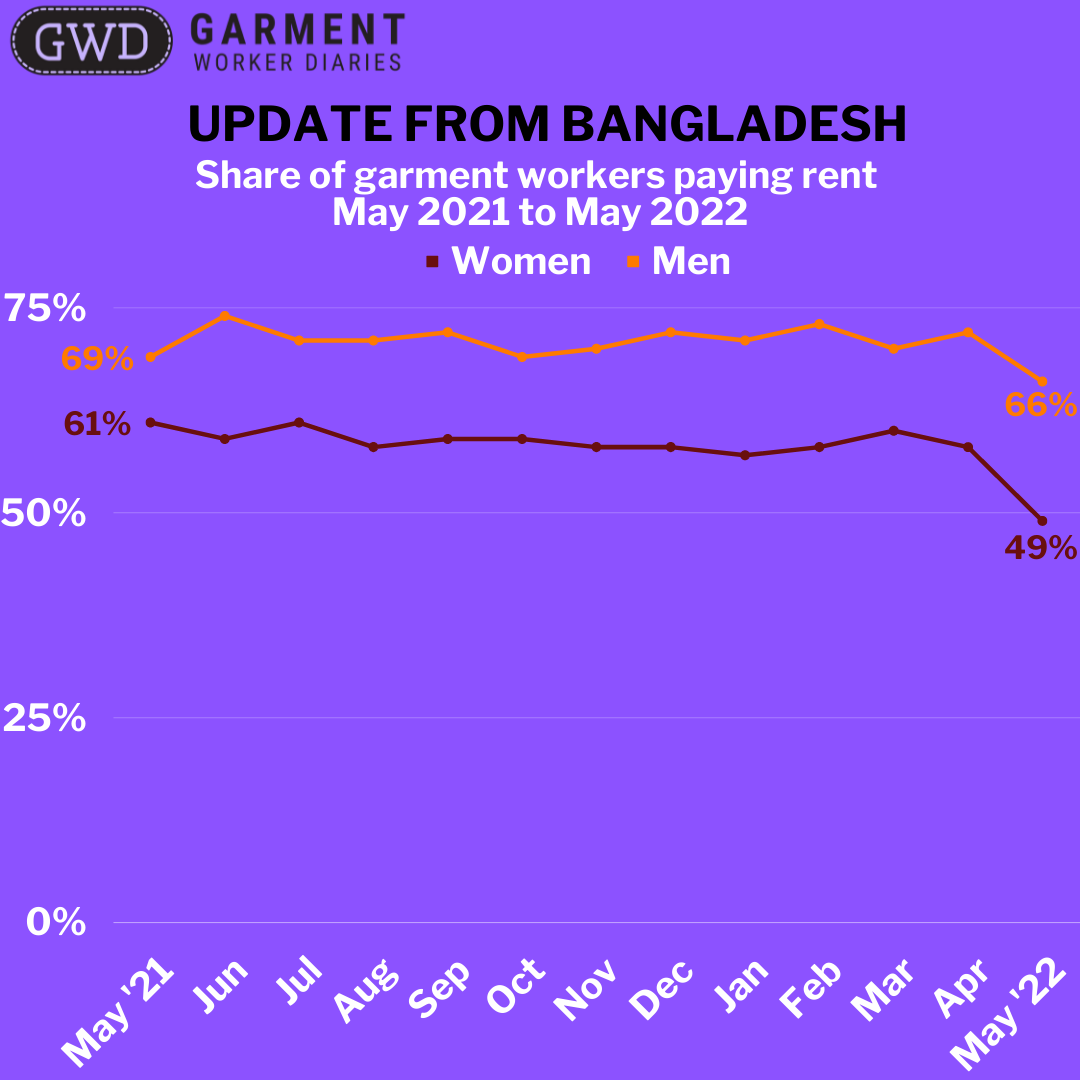 83% of all garment workers went to work at some point in May 2022 (including 81% of women and 91% of men). Typical work hours for all respondents dropped to 220 in May (221 for women and 219 for men, and one of only three months in the past 26 in which women worked more than men). Compared to April’s 248 typical working hours, May’s working hours were quite low, and compared to March’s 290 typical hours, they were lower still. But the drop in hours was completely expected and attributable to garment workers taking leave from their factories in observation of Eid al-Fitr. During typical months, less than 10% of workers and often closer to 5% tell us that they’ve spent time in both the cities and their villages. Conversely, in Eid months, many more garment workers report spending time in both cities and villages. This held true in May, as 20% of garment workers reported spending time in both locations.

Among respondents who did go to work in May but also missed at least one full week of work or more, 63% of respondents reported that they had quit working at their factory. Other reasons for not working a full week were similar to other months.

78% of all garment workers received a salary payment in May 2022 (75% of women and 86% of men), while the median salary received for all respondents was Tk. 9,500. This is a large decrease from April 2022, when median salary amounts were Tk. 14,500, and also a decrease from the more typical median salary amount of Tk. 12,000 in March 2022. However, this was again an expected, temporary drop in salary for May, as many garment workers received advance salary payments in April 2022 ahead of the Eid al-Fitr commemoration. June 2022 salary payments are expected to rise back up again to March levels.

Breaking down salary by gender, women typically earned Tk. 9,250 in May 2022 while men typically earned Tk. 10,850. It is worth noting that this Tk. 1,600 gap is the second widest in median pay between women and men over the past 26 months, the widest gap of Tk. 1,900 being found in July 2020. But it is difficult to compare typical salary amounts in May 2022 and July 2020, as they were both atypical months: in May 2022, many workers earned less because they had already been paid in advance, and in July 2020, many garment workers were paid advance salary payments ahead of Eid al-Adha that year. We’ll have to wait and see if the June 2022 payment gap narrows back to a more typical span.

Regarding regular salary payments, 54% of garment workers received a digital salary payment in May 2022. The share of cash payments was 45%, and mixed payments made up 1% of all salaries.

With less money circulating in May 2022 compared to April, many types of financial activities did an about-face in May, as garment workers switched up the frequency and value of certain inflowing and outflowing transactions:

Food security rates, already at their highest rates in April 2022, fell slightly in May, as it was reported that 9% of respondents, 9% of heads of households, and 8% of worker’s children experienced at least one week of food insecurity during the month. This might have been expected, however, as workers had access to more money in April than in May.

The data are drawn from interviews with about 1,300 workers interviewed weekly from May 2021 to May 2022. The number of worker responses in a particular month varies depending on interview participation rates throughout the month but were never below 1,210 during this period. These workers are employed in factories spread across the five main industrial areas of Bangladesh (Chittagong, Dhaka City, Gazipur, Narayanganj, and Savar). Just over three-quarters of the working respondents are women, roughly representative of workers in the sector as a whole.