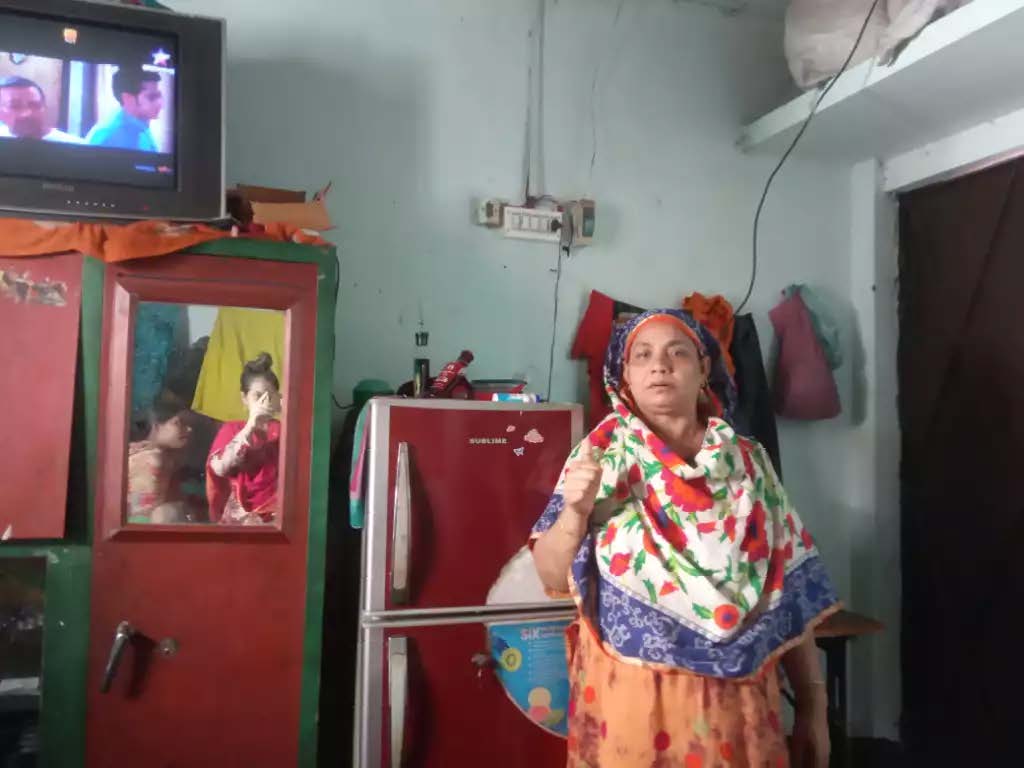 April 2022 marked the month of Ramadan for the Bangladeshi garment workers in our study, and early May marked Ramadan’s end with the Eid al-Fitr holiday. Employment-wise, that meant most garment workers received a bonus payment from their factories in observance of the holiday. Regular salary payments were also up, partially due to a high amount of work hours in March, and partially to do with advanced salary payments some workers received for April work hours. As usual, increased pay translated into a higher quality life for garment workers, and fluctuations in the frequency and amount of financial transactions, detectable by a few key markers. Here’s the full story: 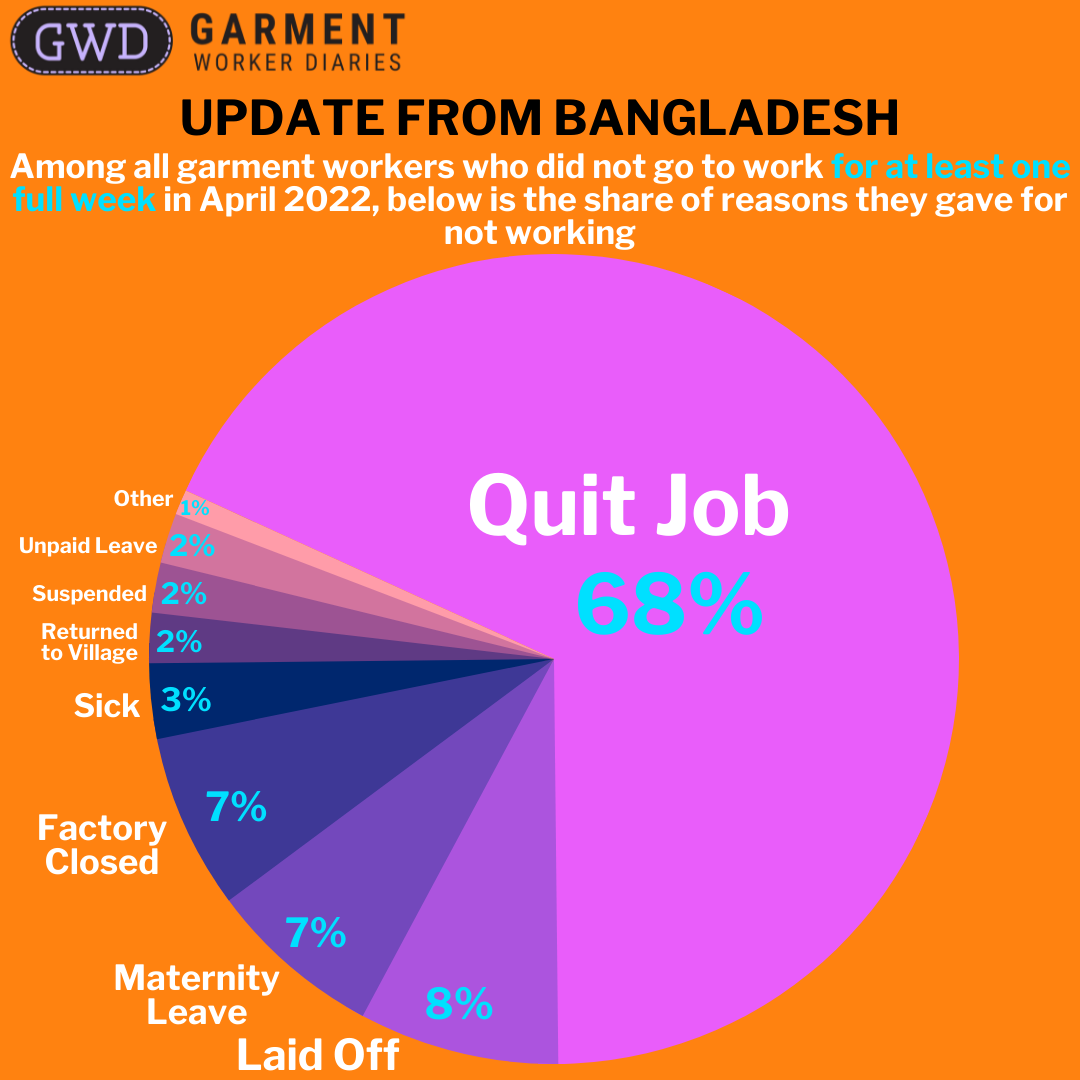 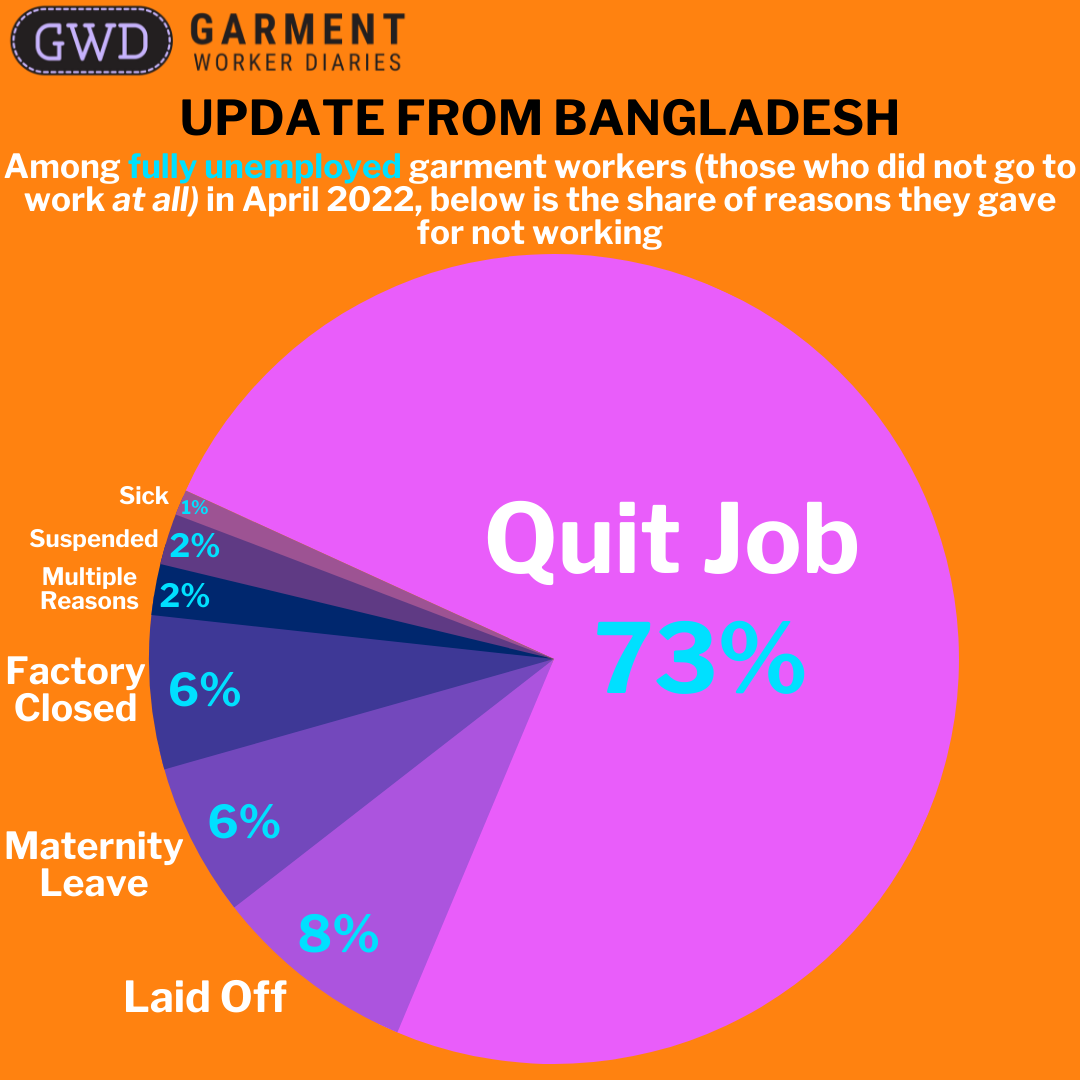 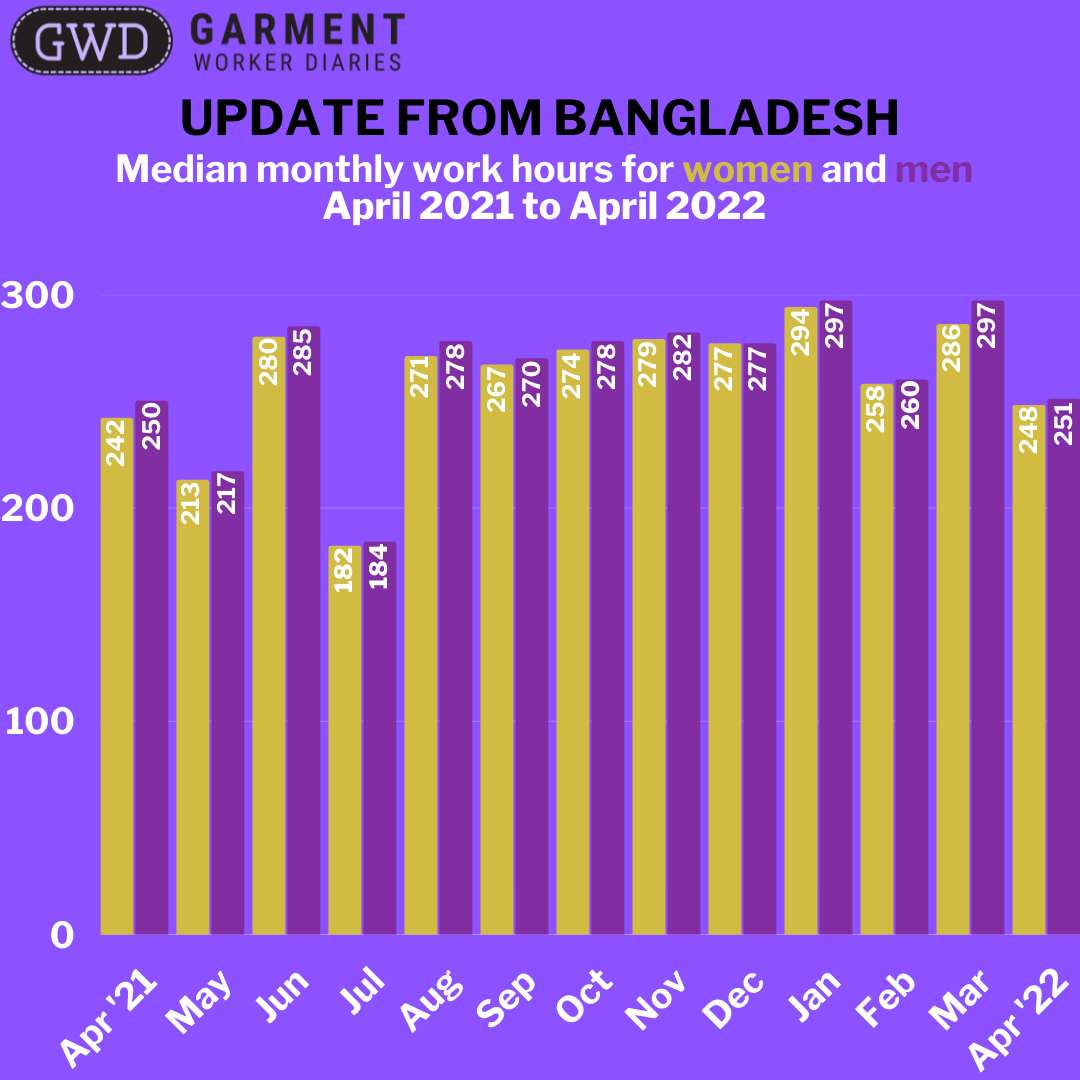 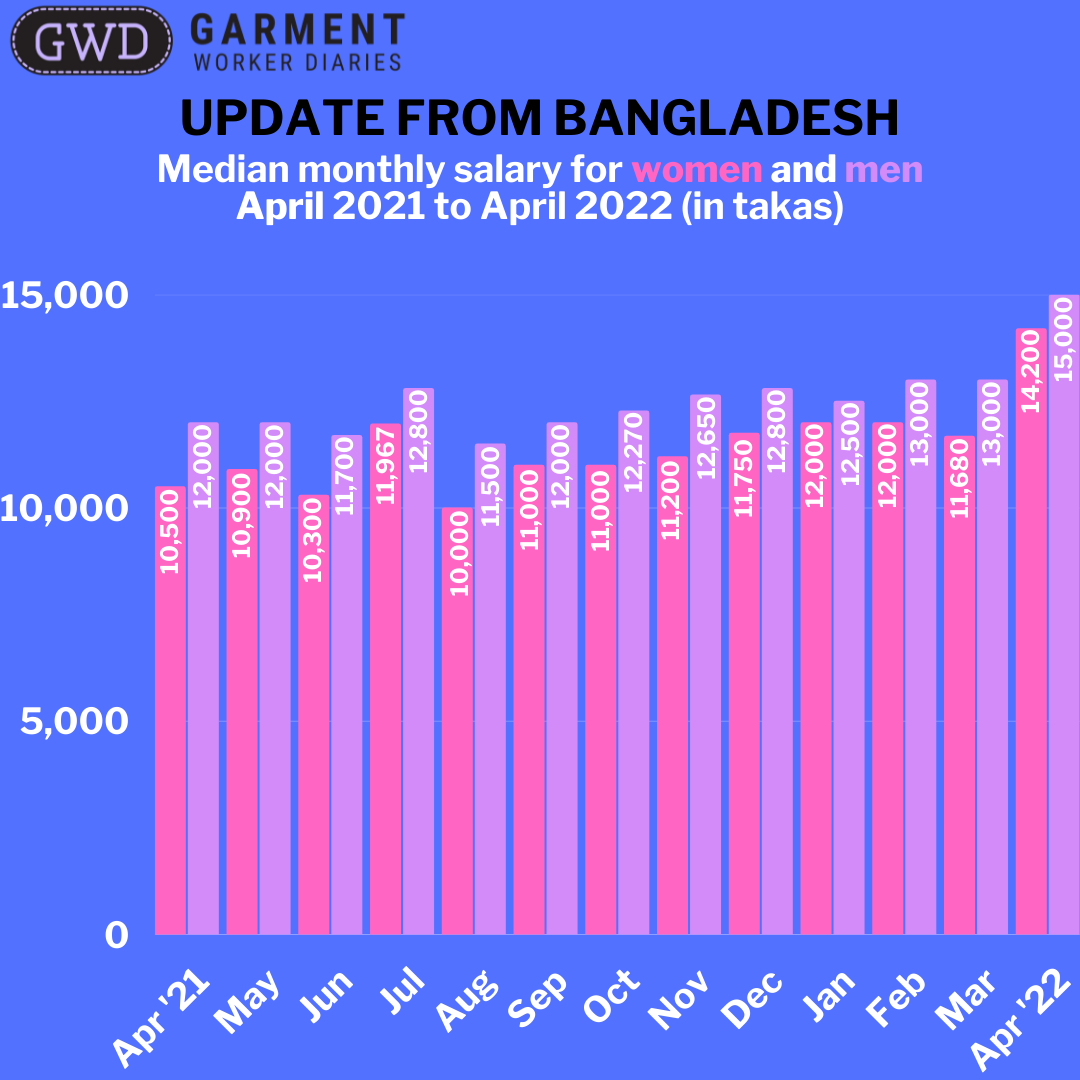 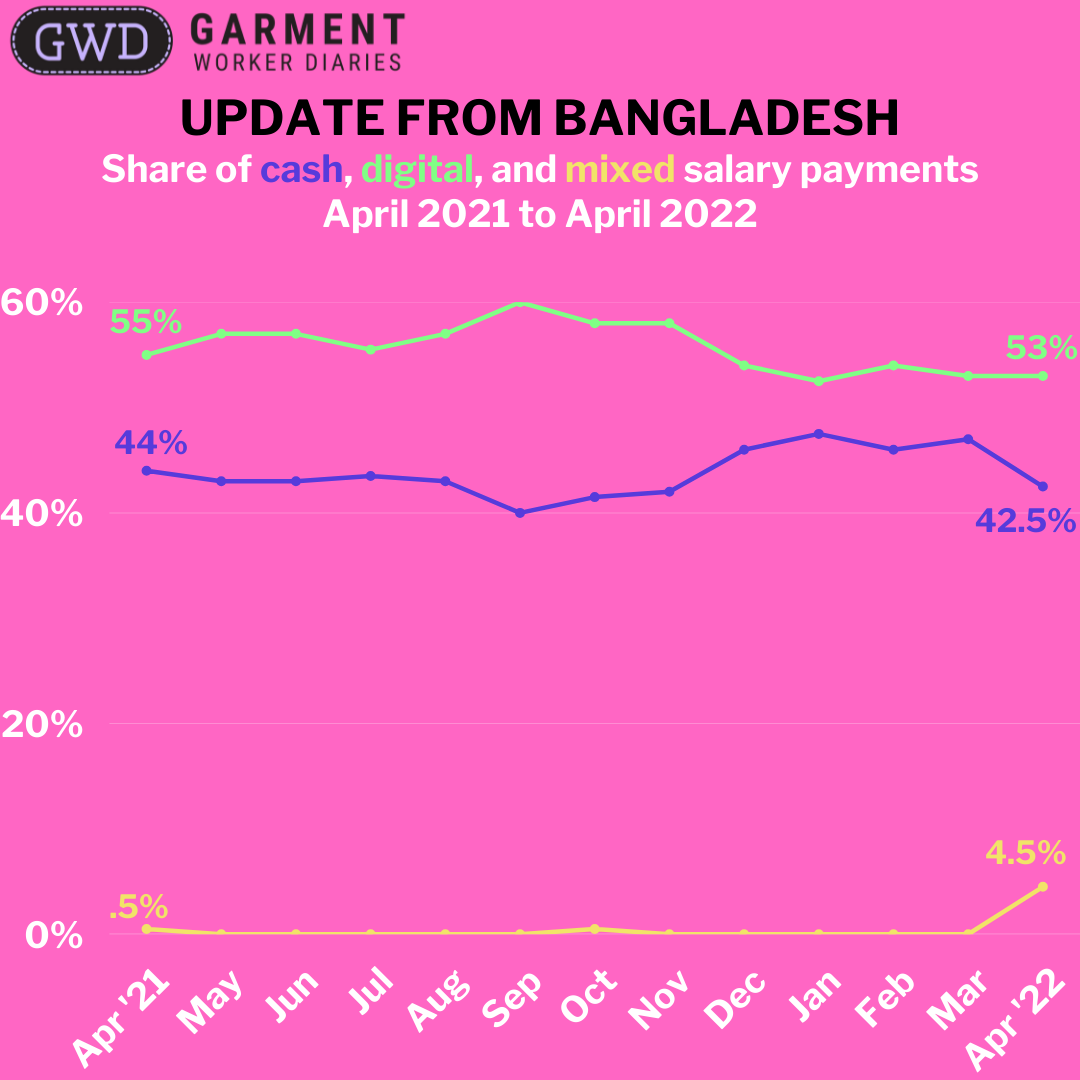 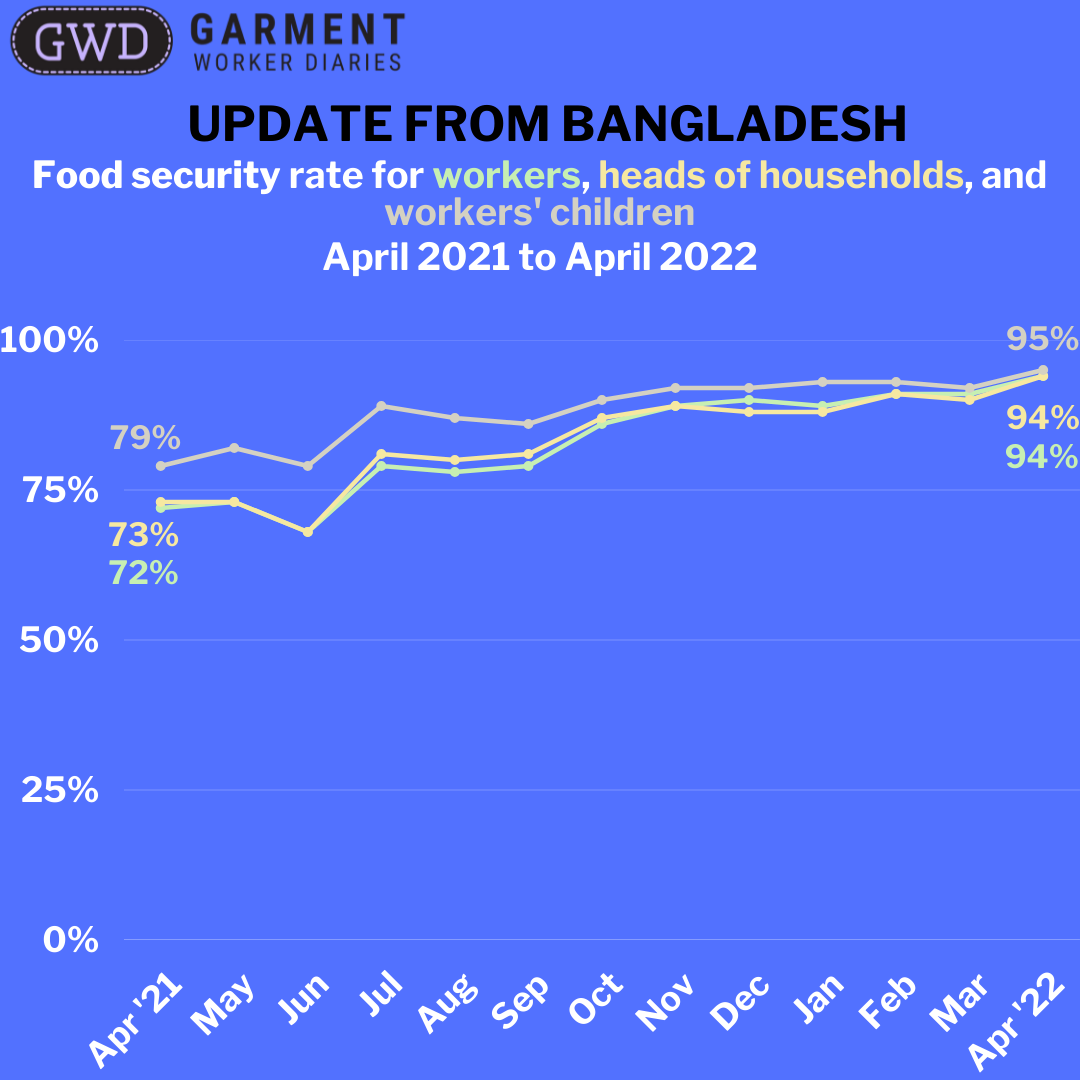 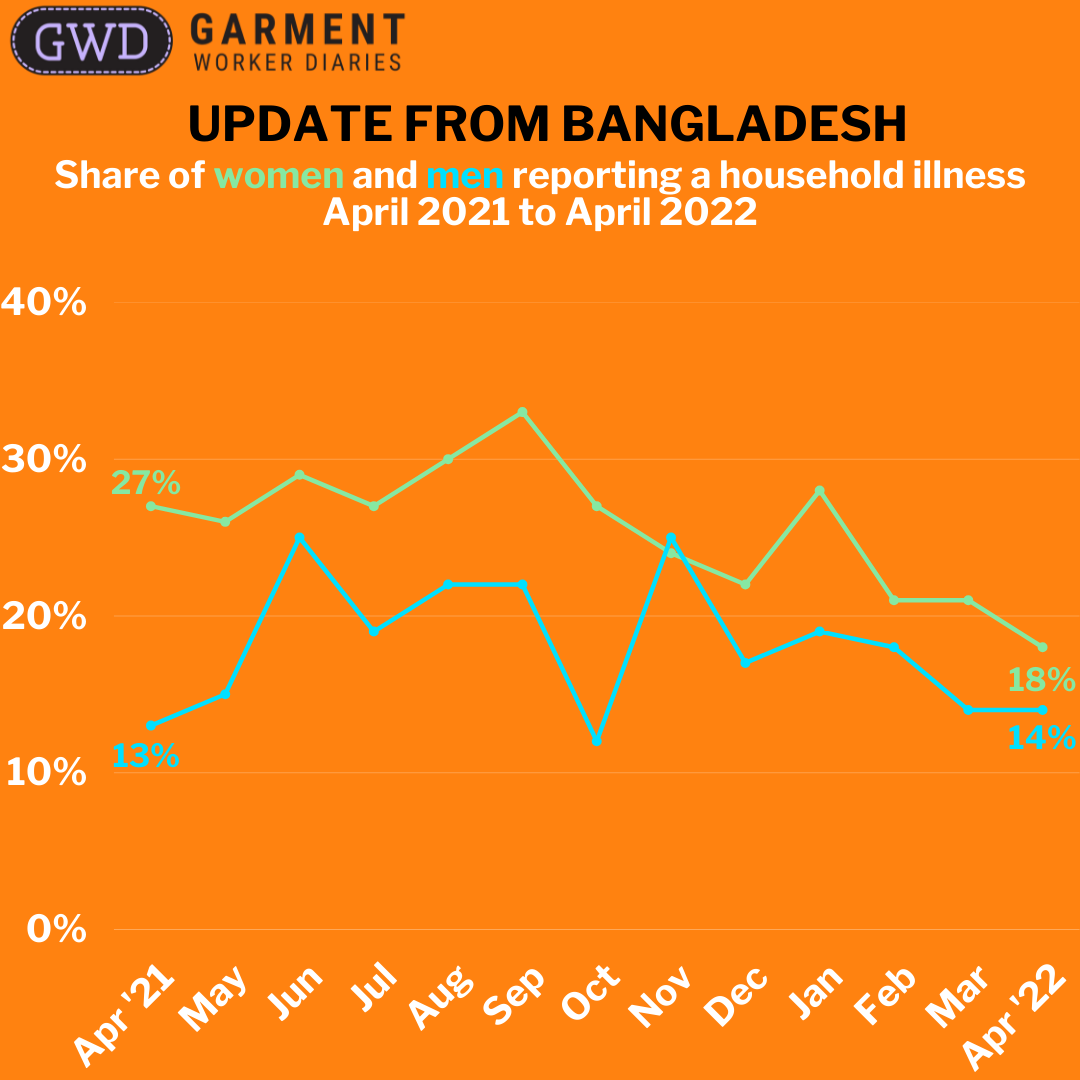 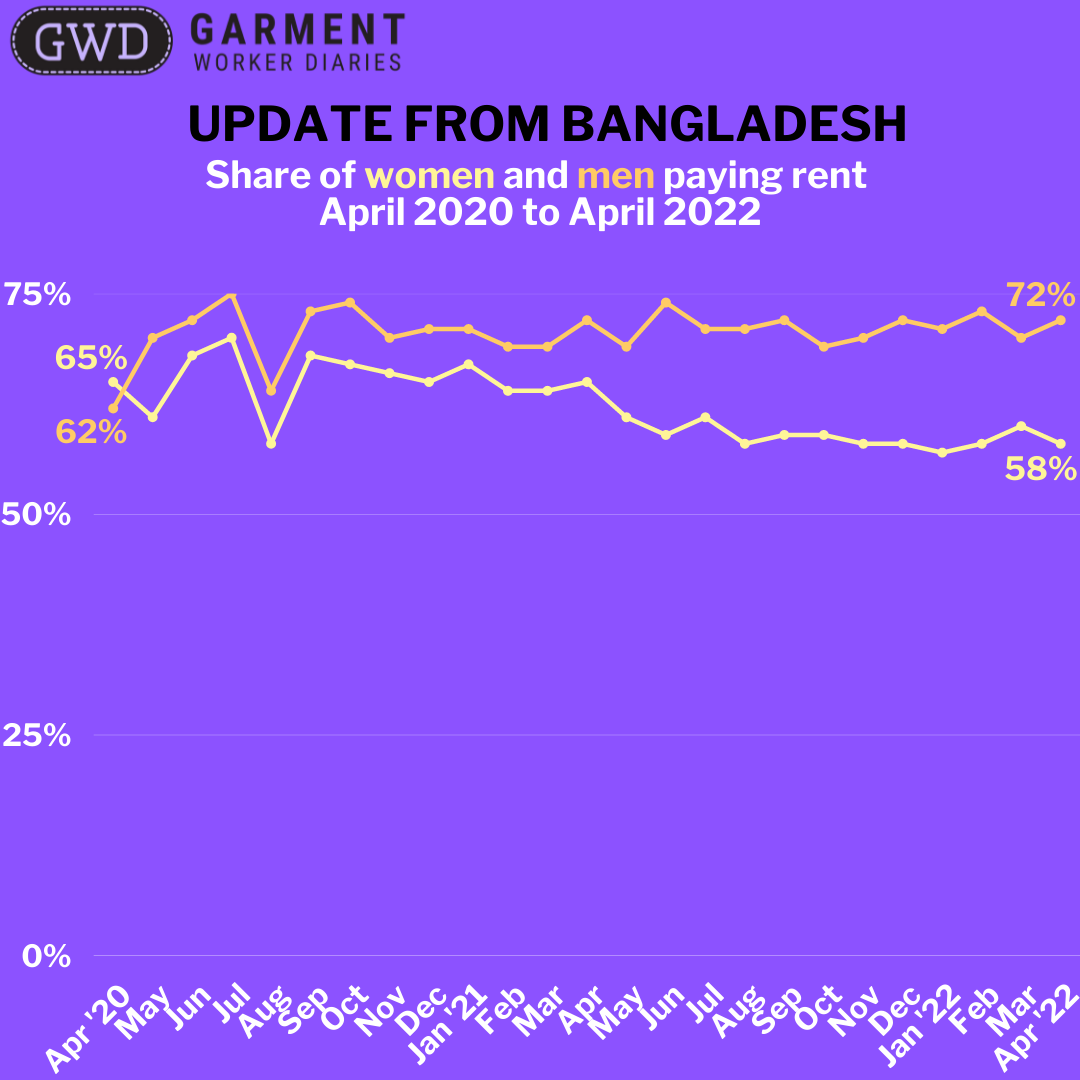 There are a few explanations for the decrease in work hours, all working in tandem with each other:

Among respondents who did go to work in April but also missed at least one full week of work or more, 68% of respondents reported that they had quit, the highest share yet among this subset of workers in the past two years. Other reasons for not working a full week were similar to other months, and one respondent told us they did not work due to lockdown reasons.

83% of all garment workers received a salary payment in April 2022 (80% of women and 90% of men). The median salary received for all respondents was Tk. 14,500 (Tk. 14,200 for women and Tk. 15,000 for men). Without taking gender into account, April 2022 marked the highest median salary for all garment workers in the past two years. However, there’s a caveat to add regarding advance payments.

As we’ve noted before, the two annual Eid observances can add a twist to the predictable one-month-in-arrears payment cycle among garment workers in Bangladesh. First, there is the chance that some garment workers will receive a partial or full advance payment for work they’ve performed in the current month. For a sizable amount of garment workers in our study, the record-high median of Tk. 14,500 paid to them in April includes not only their payment for March work hours, but also an advance payment for work they completed in April. For this reason, we are likely to see a drop in the median salary payment in May, and a return to typical salary amounts in June.

Second, there is the Eid bonus itself. Fortunately, it appears virtually all (and perhaps actually all) of the workers in our study are aware of and know how to segregate the Eid bonus from their salary in their monthly paycheck. As it stands, 68% of all garment workers in April told us they received an Eid bonus (66% of women and 76% of men). The typical amount of the bonus was Tk. 5,000 (Tk. 4,900 for women and Tk. 5,000 for men). As we’ve seen over the past two years, there is a propensity for other types of factory income (overtime, bonuses, allowances) to be paid out in cash, even as the majority of salary payments are being made digitally. That observation held true in April 2022 (if only slightly), as 50% of Eid bonuses were paid in cash, 49% were paid digitally, and 1% were mixed.

Intra-household transfers coming in and going out were at their highest levels in April 2022 since at least the beginning of the COVID-19 pandemic. Conversely, garment workers, flush with cash, took out loans at the lowest rate in the past two years, driven largely by a drop in buying food on credit and asking friends for loans (26% of all respondents received a loan in April 2022, compared to a high of 43% in May 2020, at the start of the COVID-19 pandemic).

In keeping with other Eid months, workers sent and received more transfers in April than they would have in a typical month. The share of garment workers sending money transfers outside of the household jumped in April 2022 to 34% from the more typical 17% in March (most of these transfers go to family members). But it was not just workers sending transfers—11% of all garment workers received a money transfer from a family member living outside of the household in April, up from 4% in March.

Finally, the share of garment workers who reported making a savings deposit in April 2022 was the highest it has been in at least the past two years, with 74% of respondents reporting a savings transaction (nearly identical shares for women and men). Most of those savings were home savings, just as all other financial transactions were conducted primarily with cash, including even money transfers sent outside the household (this is the one type of transaction where digital methods usually rule, but which in April fell two percentage points below cash, 39% to 41%, most likely because workers were traveling to their home districts and were able to carry the cash with them and hand it over to family members in person).

The monthly rent payment gap between women and men ticked up slightly in April 2022, as 58% of women and 72% of men reported making a rent payment (61% of garment workers overall).

Food security rates, already high, charted new positive territory last month: respondents reported to us that 94% of workers themselves, 94% of head of households, and 95% of workers’ children were able to eat enough in April 2022.

The data are drawn from interviews with about 1,300 workers interviewed weekly from April 2020 to April 2022. The number of worker responses in a particular month varies depending on interview participation rates throughout the month but were never below 1,206 during this period. These workers are employed in factories spread across the five main industrial areas of Bangladesh (Chittagong, Dhaka City, Gazipur, Narayanganj, and Savar). Just over three-quarters of the working respondents are women, roughly representative of workers in the sector as a whole.