In April of this year, we reported on the results of a survey on workers’ experience with automation. In that blog, we reported that a small share of workers had experienced any type of automation of their work, and mostly this was simply an improvement in the existing technology they were using rather than a radical re-engineering of their work. At the suggestion of members of our team and people from other organizations, in June we conducted a follow-up survey focused on who benefited from automation, however low-level it was. We report the results here. 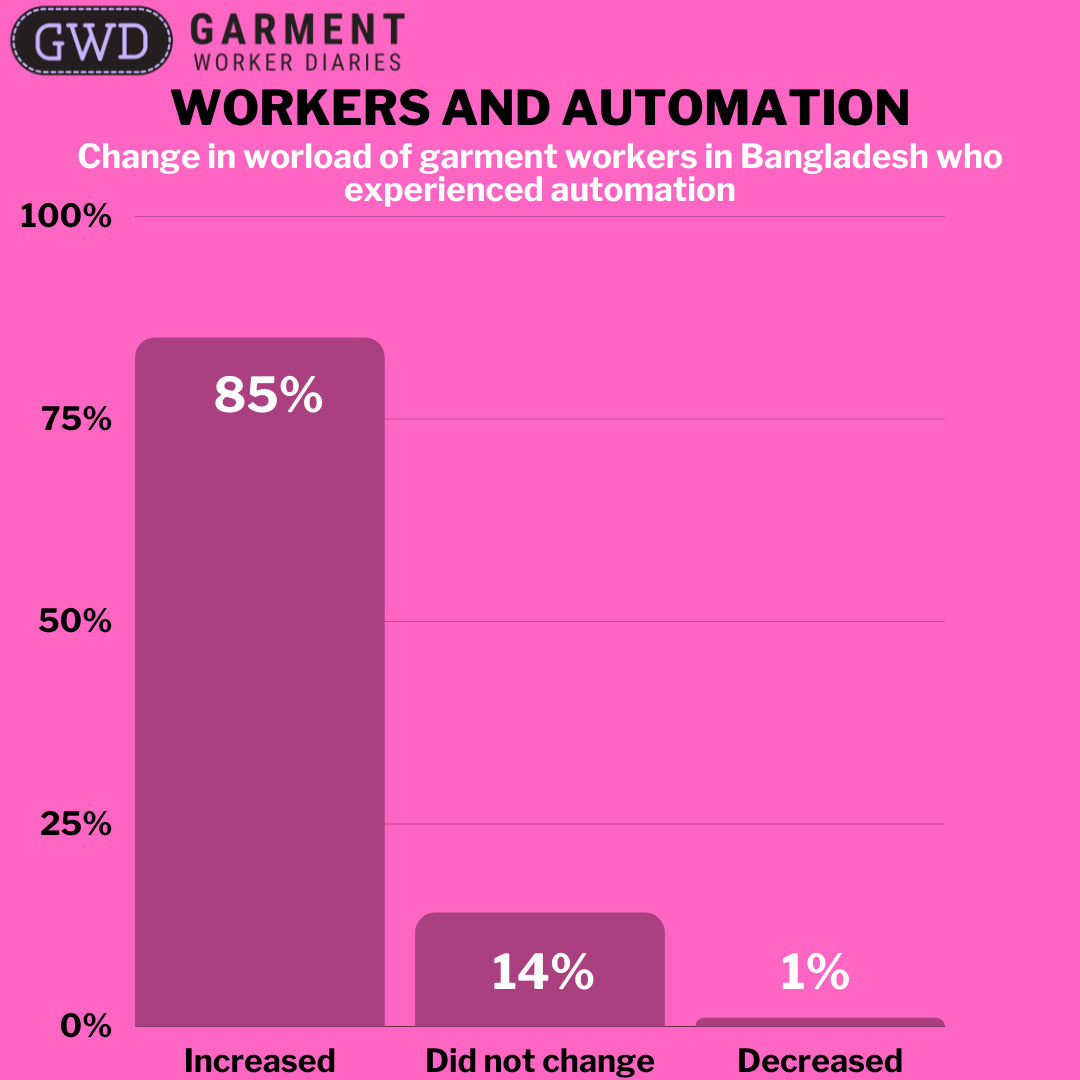 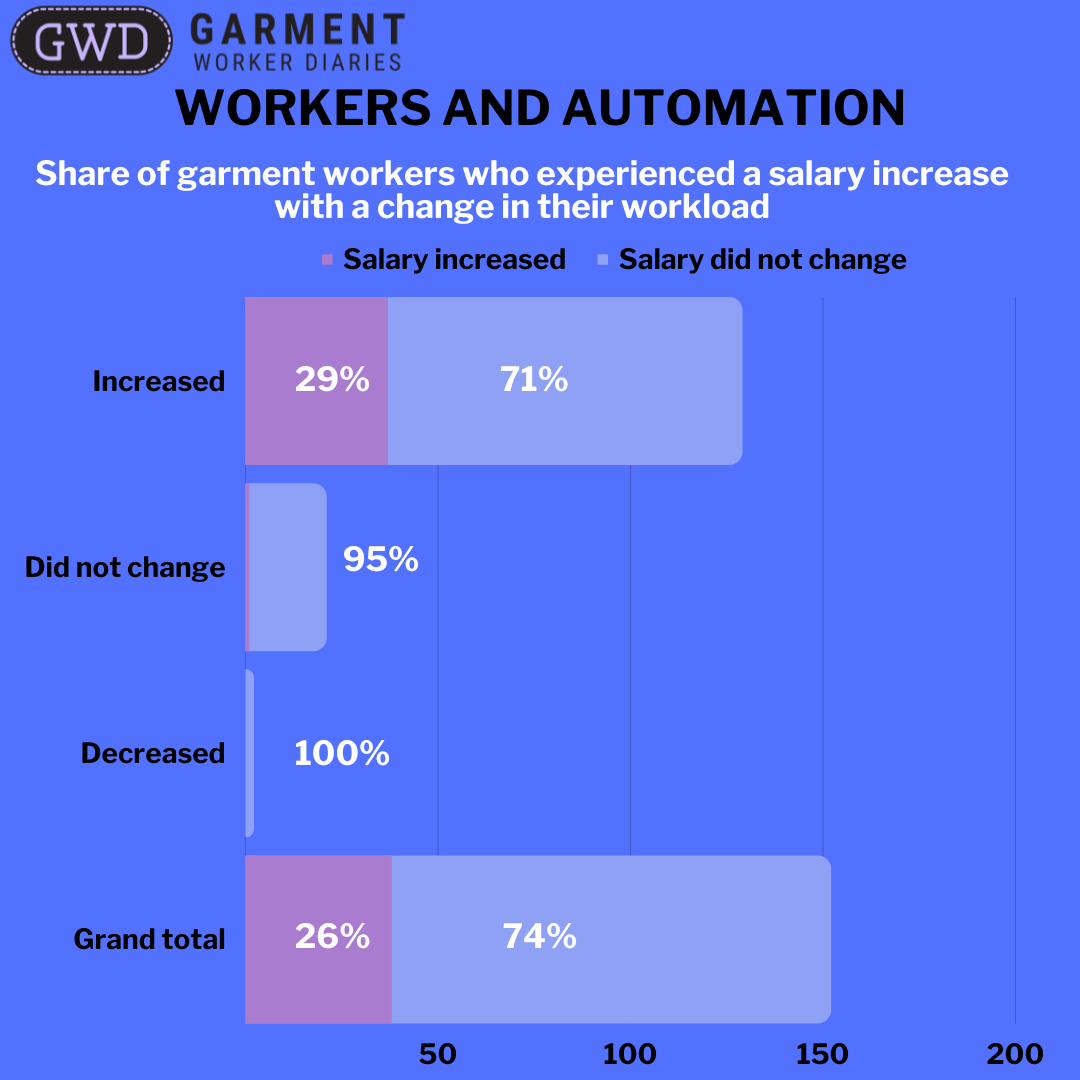 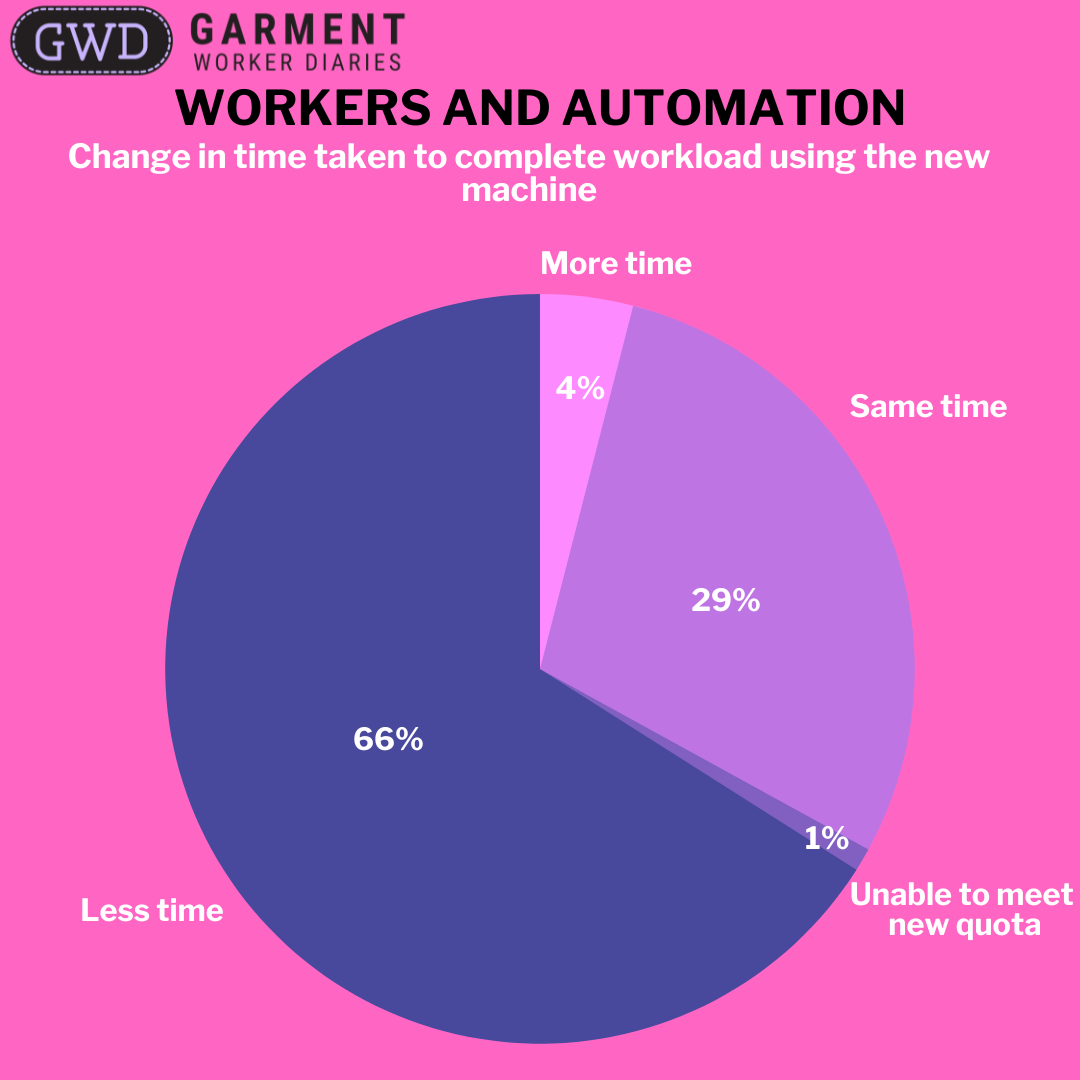 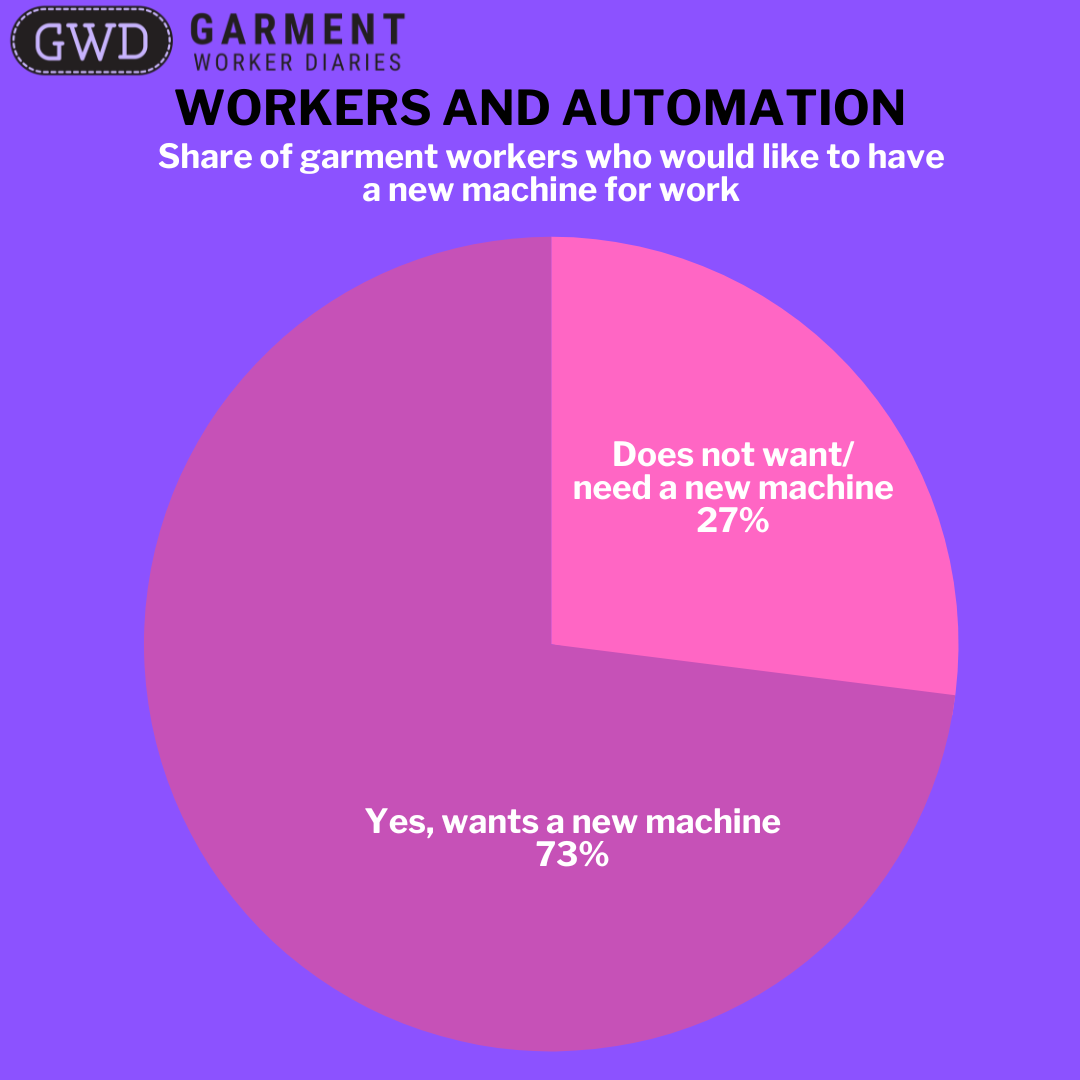 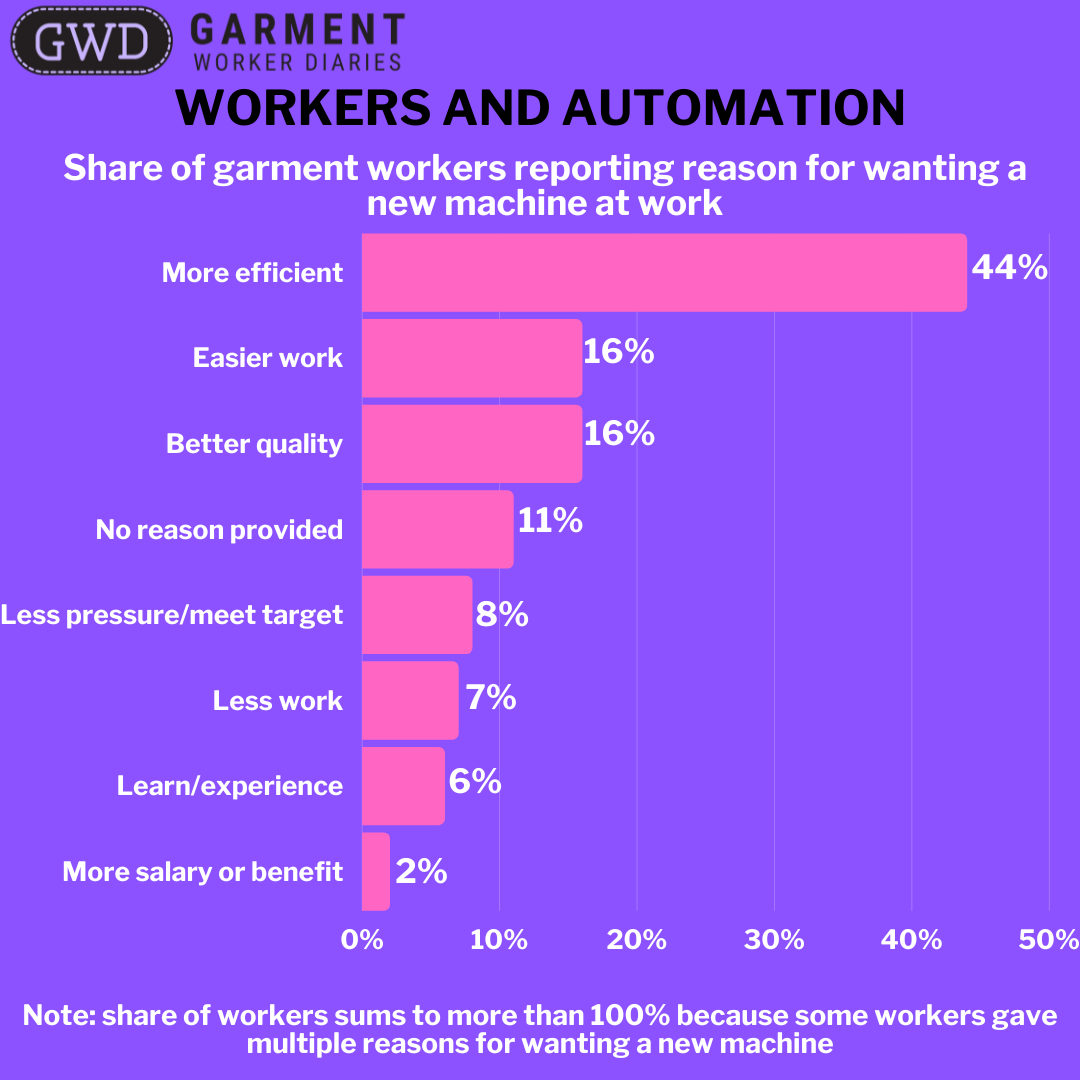 Note: Banner photo courtesy of a garment worker in Bangladesh; numbers in graphs may not sum to 100% due to rounding or, as indicated, workers were allowed to give more than one answer to a question.

Of the 213 workers remaining in our sample who had told us about their automation experience in April, 159 were willing to answer questions in the follow up survey. There was an even split among workers in terms of when they experienced a change in their work due to automation across three time periods—this year, last year, and before 2021, and the responses workers gave us did not vary across these time periods. One question we asked workers was whether their workload changed when they last got a new machine. Overwhelmingly, 85%, workers reported that their work quota increased.

Given the increase in workers’ workload after automation we wanted to know whether they got paid more. Their responses suggest that most of them did not get paid any more than before. Of those that reported an increase in their workload, 71% said their salary did not change. One possible justification that their employers might provide for why workers’ salaries did not increase, despite their increases in productivity, is that the new machines they were using made their work easier. Workers themselves confirmed this when we asked them: How would you describe your ability to meet the new work quota, once you were comfortable with the new machine? About two-thirds (66%) said it took less time to meet their quote; 29% said it took about the same time, and 5% said it either took more time or they were not able to meet their new quota with the new machine.

We also asked them an open-ended question about their experience with the new machine. We left it open to them what part of their experience they wanted to talk about. For example, one worker told us:

Two months have passed since the new machines have arrived in our factory. This machine has made our work easy. I don’t think we need any machine better than this.

When we coded and grouped their answers, we found that workers were most likely to mention how much more efficient they were with the new machines (70% of workers mentioning this answer). They also mentioned that the new machines made it easier for them to do their work (35% of workers), helped them produce better quality pieces (18% of workers), and gave them an opportunity to learn and gain new experience (8% of workers). Their answers suggest that, in many cases, the new machines helped workers meet their quota more quickly. What we do not know is whether, once they met their new quota, they were given more work to do. Our assumption is that they were. As one worker noted:

Work has been easier now. Production has been increased too.

What workers want in a machine

Finally, we asked all the workers in our sample what type of machine they would want their employer to buy them to help them do their work: Imagine a situation where your factory can buy any type of machine to help you do your work, what would you want it to do and why?

Of those who responded, just over a quarter (27%) said they could not think of a machine they wanted or did not want a machine, giving reasons such as:

I don’t want any new machine because if a new machine comes, they suspend workers after that.

No, a new machine is much too complicated.

It will be good if the machine helps to reduce my work pressure but if it does all my work then the factory will not need me anymore.

I wish we had automatic yarn cutting system. It would help us because cutting stray yarn by hand is a lengthy process

Only hand operated, no need to use legs, I would prefer this kind of machine.

I want a machine that I can control with my leg.

I would prefer dust proof machine for the safety of eyes.

I have an injury and pain in my hands. So I wish to work at a single needle machine.

When we asked them why they wanted a new machine, we got a variety of answers most of which overlapped with the answers we received from workers who had already experienced automation. 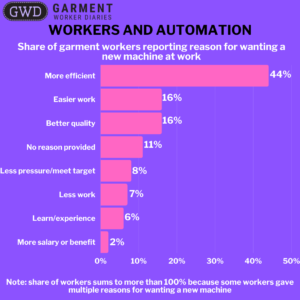 A common sentiment was articulated by one worker:

If it helps to reach target quickly then I want the machine.

Another worker was very specific about the benefits of the new machine she already has:

I operate a computer machine. It has a knife with it which automatically cut the yarn. Besides, this machine can work pretty swiftly.

And some workers articulated the multiple positive effects of a new machine:

If there is a new machine, the quality of our work will be better, more orders will come, and this will increase our salary.

The data are drawn from interviews with about 1,282 workers interviewed in June 2022. These workers are employed in factories spread across the five main industrial areas of Bangladesh (Chittagong, Dhaka City, Gazipur, Narayanganj, and Savar). Just over three-quarters of the working respondents are women, roughly representative of workers in the sector as a whole.